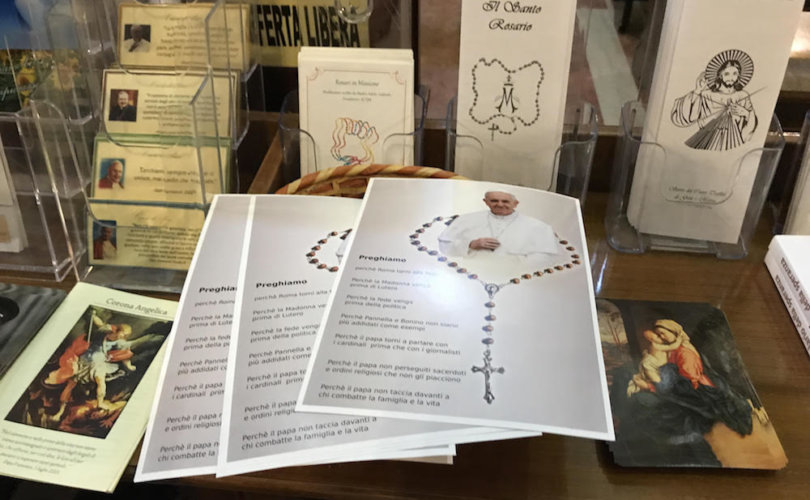 ROME, December 6, 2017 (LifeSiteNews) – A number of fliers have been left in Roman churches criticizing Pope Francis’ papacy with prayer petitions calling for restoration.

Marco Tosatti, an Italian journalist who reports extensively on Vatican politics, says that the handouts first appeared on Saturday, December 2, and popped up again the following day.

They included a list of unusual petitions printed beside an illustration of the Holy Rosary encircling a photograph of Pope Francis. Readers were asked to pray:

The reference to the Madonna may have been provoked by the recent Vatican stamp depicting Luther standing at the foot of the cross in Mary’s place.

Marco Pannella was a left-wing politician who worked with fellow radical Emma Bonino to promote the culture of death in Italy. The recently deceased founder of Italy’s Radical Party was praised by the new chief of the renovated Pontifical Academy for Life, Archbishop Vincenzo Paglia, at an event celebrating the release of Pannella’s biography in February of this year.

Emma Bonino, who is still living, was praised by Pope Francis in 2016 as one of the forgotten “great ones” of Italy. Her campaign to decriminalize abortion in Italy began in 1968 when she worked as a backstreet abortionist. In July 2017 Bonino was allowed to speak about refugees in a Catholic church in northern Italy. A pro-life activist who protested her presence was “forcibly escorted” from the church.

The cardinals mentioned may be the prelates who submitted questions, or Dubia, concerning harmful interpretations of Amoris Laetitia to Pope Francis in 2016. Pope Francis, whose off-the-cuff interviews with journalists have rocked the world, has not yet responded directly to the so-called “Dubia cardinals”, of whom only two still live.

The “priests and religious orders” mentioned might be the Franciscan Friars of the Immaculate, a once-thriving order that was dismantled by Pope Francis in the first year of his pontificate.

“Those who fight family and life” might refer to recent controversial guests at the Vatican, including the president of the Swiss branches of Planned Parenthood.

The flier or “manifesto”, as Tosatti calls it, was unsigned.

A previous anonymous communication criticizing Pope Francis to the Romans took the form of posters pasted overnight to walls throughout Rome. Appearing in February of this year and written in Roman dialect, the posters reproduced an unflattering photo of the pontiff glowering from a chair. They read: “Ah, Francis, you have intervened in Congregations, removed priests, decapitated the Order of Malta and the Franciscans of the Immaculate, ignored Cardinals … but where is your mercy?”