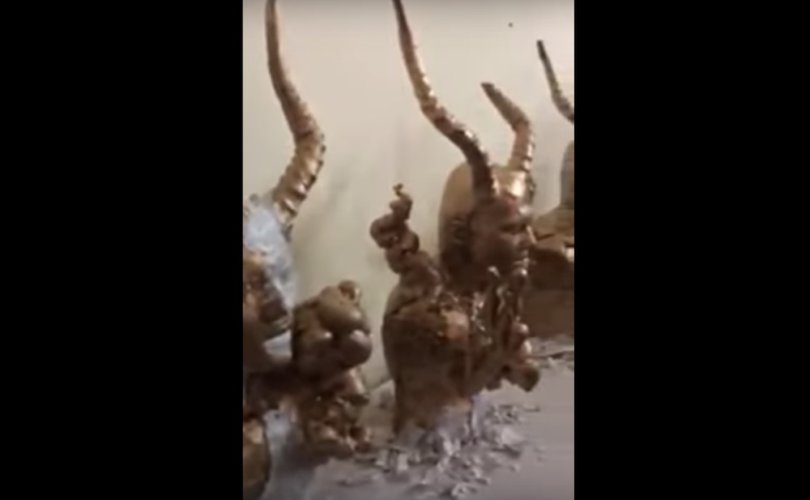 KWAZULU-NATAL, South Africa, November 13, 2019 (LifeSiteNews) – Grantleigh Curro School is a small South African school that bills itself as dedicated to “uphold(ing) Christian values and encourag(ing) principled, caring and responsible behaviour at all times,” but currently finds itself mired in controversy over a student art display featuring demonic and anti-Christian imagery.

A video by a concerned father went viral last month of paintings, illustrations, and sculptures that included fast food mascot Ronald McDonald replacing Jesus Christ in the Last Supper and God in Michelangelo’s famous painting The Creation of Adam, a depiction of a Jesus figure grotesquely opening his own chest, recurring images of demons and skull-headed figures, and busts of horned figures composed partly of torn-up Bible pages, with more tatters strewn about the table.

The display “broke my heart” and “felt like we were crucifying Jesus all over again,” the father said. “My God is not a clown!”

“It broke my heart to see that you allowed this in the school, and I want to encourage parents to not to come to this school,” he said in an open message to Grantleigh officials. “I love them, they cared for my kids for a long, long time. I honor you, teachers. But I do not honor what you have allowed in the school. If things go wrong from here onwards, it’s because of what you allowed to be part of the school.”

School officials responded with Grantleigh executive head pledging an internal investigation into the matter, and College Operational Head Juriana Filmalter stressing that the display was “not ‘open’ for all the kids to see,” and carried a disclaimer that had to be read to understand the “context” (on which she did not elaborate).

The unnamed student who created the pieces responded to the uproar by explaining that his intention was to convey what he sees as the commercialization and exploitation of faith in the 21st century. “I do not care what people believe, I simply want to highlight potential risks in how they believe it,” he said.

One former student, 2011 head boy (student representative) Sinjon Moffett, critiqued the works at greater length in an open letter on the subject.

“Why was it deemed appropriate to publicly deface, misrepresent and mock the figure who many within the Grantleigh family, as well as millions of people globally, worship as their God?” Moffett asked, noting that tolerating the display on “artistic expression” grounds is inconsistent with the school’s ban on “racist and homophobic” expression: “Disregarding the religious controversy that the artworks present, they are objectively violent and graphic in nature.”

While the artist was clearly “an extremely talented individual,” he continued, “the first lesson of contemporary art is that it is the message, not the method, that carries importance. Any art teacher or enthusiast will attest to this, as this has been the general understanding of art since around the time of Duchamp. This removes the prospect for any explanation that the learner’s art was skilfully executed and therefore respectable.”

“A school should be where dreams are inspired, not nightmares,” Moffett declared. “I am deeply disappointed to see that it is Jesus who has been belittled under the flag of the school that claims to embody a Christ-inspired ethos. Grantleigh, you are responsible for this iniquity against all the people who follow Jesus, and against God himself.”