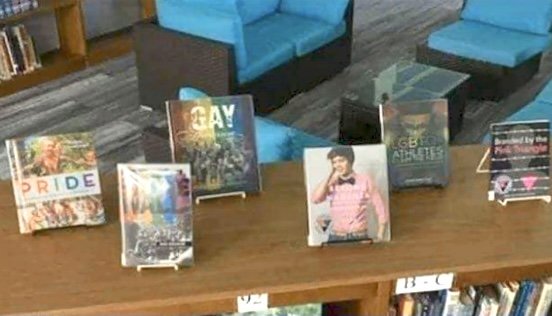 On May 26, David Valesky, a Penncrest School District board member, shared a photo of the display posted by another facebook user, adding his own comment: “Besides the point of being totally evil, this is not what we need to be teaching kids. They aren’t at school to be brainwashed into thinking homosexuality is okay. It’s actually being promoted to the point where it’s even ‘cool,’” he wrote.

According to the Titusville Herald, fellow board member Jeff Brooks took issue with Valesky’s comments, posting a response online: “Being gay isn’t new … People have always been gay. It’s not a movement. It’s not a fad. We’ve always had books in the library about gay people.”

Superintendent Timothy Glasspool explained to the news outlet that such a display is typical for librarians to arrange according to “seasonal, cultural, athletic, holiday, historic and similar timely themes throughout the school year,” and that as “a public school, we teach tolerance and celebrate diversity.”

School board director Jennifer Davis was a little more direct in her statement to the Herald. “Mr. Valesky’s comment was inappropriate and unprofessional,” she said. “I believe that we, as school board directors, have a responsibility to make decisions for the community as a whole. We are a public school and need to provide resources and support for all of our youth.”

In Valesky’s response to the local newspaper inquiry, he remained firm in his convictions.

“I make no apology for what I posted on social media. I am a Christian. I believe homosexuality is wrong in the sight of God,” he said. “I do not hate gays. I never indicated that in any way. I do not believe homosexual books or clubs have any place in our schools. If they want to have a club outside of school, that is up to them, but to push this agenda to our children in a public school is not the place or purpose of public education. The purpose of public education is to teach kids skills for life, and to be responsible and productive citizens.”

Petition to remove Valesky and DeFrancesco

While Valesky’s post on Facebook elicited a broad variety of responses, it also caught the eye of a former PENNCREST student and Saegertown graduate from the Class of 2013 named Melanie Weed, who self-identifies as “queer.”

Weed created a “Change.org” petition online calling for the removal of Valesky and DeFrancesco from the PENNCREST School Board, which received local press coverage.

“I don’t believe people who spew hateful rhetoric, like that which got Matt Shepard tortured, should be in charge of making decisions for children, especially queer children,” she said.

“Kids are gonna be mean,” Weed continued. However, “(a) grown man should be held accountable for what he said.”

As of this writing, the petition, which is open to the world, has 4,756 signatures.

Large crowds at school board meeting

Twice over the last week, the Penncrest School Board meetings have hosted large crowds to discuss the issue of Valesky’s post. According to the Titusville Herald, these meetings included “a mixture of those wearing rainbow colors and pride messages and those with stickers on their shirts saying, ‘I Stand With David.’”

Different individuals testified from both camps at each meeting.

“I am enraged, I am so angry,” one parent told Erie News Now. “I think if that’s the stance Mr. Valesky wants to take, then he’s on the wrong board.”

Yet another local taxpayer, Anne Gamber, stated, “We’re not allowed to have a Bible on the shelf at a school, but this is their religion and their gospel. It is evil; the homosexual agenda is evil.”

With regards to the numbers present at the meeting on Wednesday evening, Valesky told LifeSiteNews, “There was enough people there to show what side people are really on. I think there was close to 175 people there that were in support of the Christian stance. So that was encouraging.”

As for those in support of the pro-“LGBTQ+” book display, he said, “I’m sure (the number) was way under a third” of the people present.

Included prominently in the contested display was a book titled Beyond Magenta: Transgender Teens Speak Out, which according to an organization called Binary Australia, “contains explicit language, violent acts, and graphic descriptions of oral sex carried out by children as young as six years old. Written mostly in first person, transgender people share their journeys without mentioning the illegal nature of their activities or the consequences of certain behaviours.”

The organization’s press release on the subject included excerpts from the book:

From six up, I used to kiss other guys in my neighborhood, make out with them, and perform oral sex on them. I liked it. I used to love oral. And I touched their you-know-whats. We were really young, but that’s what we did.

“Descriptions of violent behaviour include pushing over a pregnant teacher. The author writes, ‘I know it was wrong but … ’ – as if their anger were a justification for their actions,” it noted.

“Such material has no place in taxpayer funded libraries and should certainly never be promoted to children,” Binary spokesperson Kirralie Smith said in the release.

Another organization sounding the alarm on the promotion of the same book for children is the Canadian Catholic Intell Association, which asks, “Why are these books in schools? Is it to normalize pedophilia? Is it to help groom kids for pedophilic teachers?”

Through email correspondence, LifeSiteNews presented the documentation of the above book to each of the 10 members of the Penncrest School Board and asked for their response.

“Quick answer is I don’t feel I can answer any questions on a book I didn't read,” Brooks wrote. “We have policies and processes in place to choose books and challenge them. These policies were unanimously approved by all board members currently serving.”

Valesky also responded, saying, “The quotes from this book are appalling. This is encouraging students to engage in unlawful and dangerous acts. Such things have no place in the public schools (or anywhere) and should never be placed before the eyes of the school children we are entrusted to treasure and protect.”

“The fact that such an explicit book is in the library is definitely cause for concern and outrage. However, we must recognize that this book is the message of the LGBTQ movement. Therefore, we should be equally as concerned and outraged by all books that promote this lifestyle to our children,” he concluded.