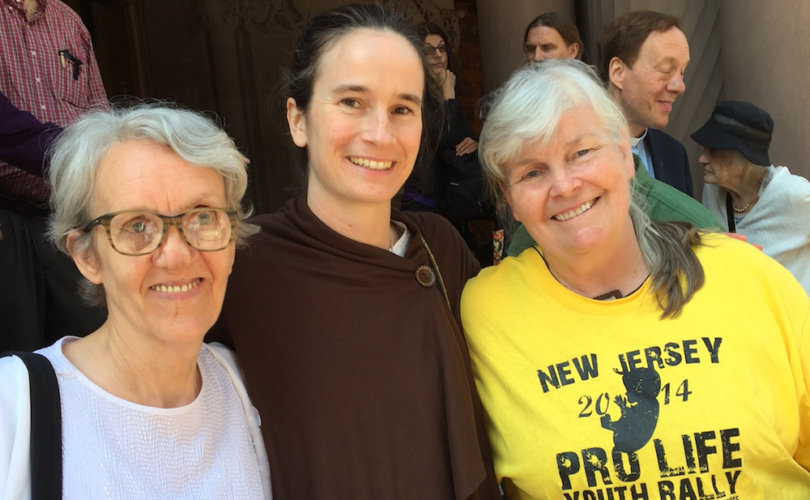 Pro-life witnesses Linda Gibbons, Mary Wagner, centre, and American Joan Andrews-Bell outside Toronto court. The three women have spent a total of some 18 years in jail for peaceful attempts to save women and children from the violence of abortion.

TORONTO, August 17, 2017 (LifeSiteNews) — Pro-life activist Mary Wagner is facing a possible jail sentence of 18 months after an Ontario judge found her guilty on Tuesday of mischief and breach of probation.

Justice Rick Libman of the Ontario Court of Justice convicted Wagner on charges arising from her December 12, 2016, arrest at the Bloor West Village Women’s Clinic, where she had tried to persuade women to choose life for their unborn children.

After delivering his verdict, Libman deferred sentencing Wagner to September 12, so she can prepare.

He told the 43-year-old Wagner, who is representing herself, that she can submit evidence on her behalf at the sentencing hearing, such as character references.

“I intend to seek some reference letters, not just for my own character but in support of the unborn,” Wagner told LifeSiteNews.

She wants to “open it up to the larger community” to submit letters “that can speak to the fact that it’s not just one person in court, one person, so to speak, breaking the law, but many people who support justice for the unborn.”

Wagner’s trial began May 25 and proceeded intermittently until closing arguments on June 29. It was complicated and delayed because the Crown brought an extraordinary application for a media publication ban.

Nordheimer's ban prohibits the publication of the names of three abortion center personnel who testified against Wagner. LifeSiteNews is fighting the ban, which is expected to be argued on September 18.

In delivering his verdict on Tuesday, Libman said Wagner testified on her own behalf that she wanted to offer alternatives to abortion to women in the abortion centre.

“She wished to reach out in love, support them,” and let them know they would have help if they brought a child into the world, Libman related.

“In her thoughtful comments to me,” Wagner pointed out the Crown’s argument that she was interfering with a business presupposed the abortion center was a “legitimate business,” added the trial judge.

“However, in her view,” the business of the abortion facility “is to take the life of an unborn child,” and “there can be no greater injustice than that.”

Wagner also “believed she was upholding the law in the manner in which she acted,” Libman said.

She referred to Thomas Aquinas — a 12th-century philosopher and doctor of the Catholic Church — who stated “if a law is unjust, it is not a law,” Libman noted. “What could be more unjust, in her view, than an attack on a helpless human being?”

Nevertheless, the trial judge accepted witness testimony that Wagner “entered the clinic through a subterfuge,” and that once in the abortion facility, “declined” to leave, and “was removed by force.”

“In my opinion, this intentional and deliberate conduct of Miss Wagner clearly amounts to the offence of mischief,” Libman concluded.

He also found Wagner guilty of breaching the condition in both the 2012 probation order of Justice Mavis Wong and 2015 order of Justice Katrina Mulligan that she keep the peace and be of good behaviour.

Wagner has already served 180 days in jail while awaiting trial because she refused to sign bail conditions requiring her to stay away from abortion centres.

But when her trial was delayed because LifeSiteNews contested the Crown’s publication ban application, LifeSiteNews lawyer Phil Horgan asked Libman June 9 to release Wagner on the sole condition she return for the remainder of her trial. Crown lawyer Power agreed to this.

Wagner has spent a total five years in jail to date for her peaceful attempts to save women and children from the violence of abortion.

Linda Gibbons, whom Wagner described as an inspiration to her, has spent 11 years in jail for her pro-life witness. Gibbons was among the 30 or so Wagner supporters in the courtroom on Tuesday to hear Libman’s verdict.

Wagner said anyone who wants to submit a letter on her behalf attesting to her character, but more important, advocating for the unborn child, should address the letter to Honorable Justice Eric (Rick) N. Libman.

The letters should be in English, brief, signed with contact information included, and either typed or in legible handwriting, she told LifeSiteNews.

Wagner asked that letters be sent to the address below no later than September 8. She will read all before including as evidence at her sentencing hearing.

The letters, while written to Libman, should be sent to: Mary Wagner, ℅ Campaign Life Coalition, Suite 300, 104 Bond Street, Toronto, ON, M5B 1X9.