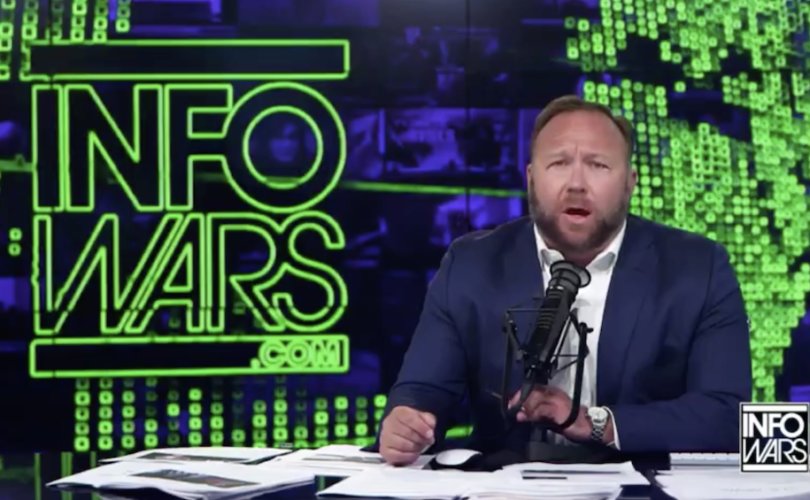 August 6, 2018 (LifeSiteNews) – In the latest clash between big tech companies and those who hold unpopular or controversial views, Facebook has permanently kicked “Infowars” off of its platform, saying the page was “unpublished for using hate speech.”

Facebook’s banning of Alex Jones’ signature platform came just after Apple removed almost of all of his podcasts because “Apple does not tolerate hate speech.”

“We believe in representing a wide range of views, so long as people are respectful to those with differing opinions,” an Apple spokesperson said.

Spotify also removed the Alex Jones Show from its podcasts.

“What we are witnessing is an ideological purge intended to re-define the very concept of free speech,” InfoWars editor-at-large Paul Joseph Watson wrote. “If free speech does not include controversial/unpopular/offensive speech, it doesn’t exist. A society in which free speech doesn’t exist is doomed to collapse into authoritarianism.”

America Has Been Sold Out To Communist Censorship pic.twitter.com/nJllgbbrIG

Although Infowars promotes some conspiracy theories that are far outside the mainstream – for example, that 9/11 was actually orchestrated by the U.S. government – it also reports on current events just as other media do. During his presidential campaign, then-candidate Donald Trump granted a video interview to InfoWars.

Watson called the mass deletion of Infowars from Facebook, Apple, Spotify, and YouTube “a coordinated purge” and “political censorship.”

Wikileaks came to Infowars’ defense, asking, “Which publisher in the world with millions of subscribers is next to be wiped out for cultural transgression?”

The empire strikes back: Apple, Spotify, Facebook and Google/Youtube all purge Infowars/Alex Jones. Yes, Infowars has frequent nonsense, but also a state power critique. Which publisher in the world with millions of subscribers is next to be wiped out for cultural transgression? https://t.co/XAEQWr58hw

Infowars says it has been banned by Facebook for unspecified 'hate speech'. Regardless of the facts in this case, the ability of Facebook to censor rivial publishers is a global anti-trust problem, which along with San Francisco cultural imperialism, reduces political diversity. https://t.co/xb5oY2JHzy

Facebook said in a press release the deleted Infowars pages were taken down “for glorifying violence, which violates our graphic violence policy, and using dehumanizing language to describe people who are transgender, Muslims and immigrants, which violates our hate speech policies.”

Mollie Hemingway of The Federalist wondered on Twitter if Facebook will censor Planned Parenthood “to be consistent about opposing those who glorify violence and dehumanize others in order to justify that violence?”

Just curious: Did they also ban Planned Parenthood? To be consistent about opposing those who glorify violence and dehumanize others in order to justify that violence? https://t.co/wdUnrfXhTW

Many conservatives argue that Facebook and Google essentially have monopolies on the distribution and sharing of information, and are using these monopolies to unfairly target certain viewpoints for censorship. When Facebook banned Alex Jones' personal account for 30 days late last month, Sen. Ted Cruz asked, “Who the hell made Facebook the arbiter of political speech?”

Am no fan of Jones — among other things he has a habit of repeatedly slandering my Dad by falsely and absurdly accusing him of killing JFK — but who the hell made Facebook the arbiter of political speech? Free speech includes views you disagree with. #1A https://t.co/RC5v4SHaiI

Alex Jones is now an unperson, straight out of the plot of George Orwell's Nineteen Eighty-Four. Regardless what you think of him and Infowars, this is the equivalent of digital book burning and sets a horrifying precedent for mass censorship by Big Tech.

“The ban is just part of a wider censorship purge that also use stealth censorship, shadow banning and algorithmic manipulation to hide and bury conservative content,” Watson wrote in another post. “This is the modern day electronic equivalent of book burning.”