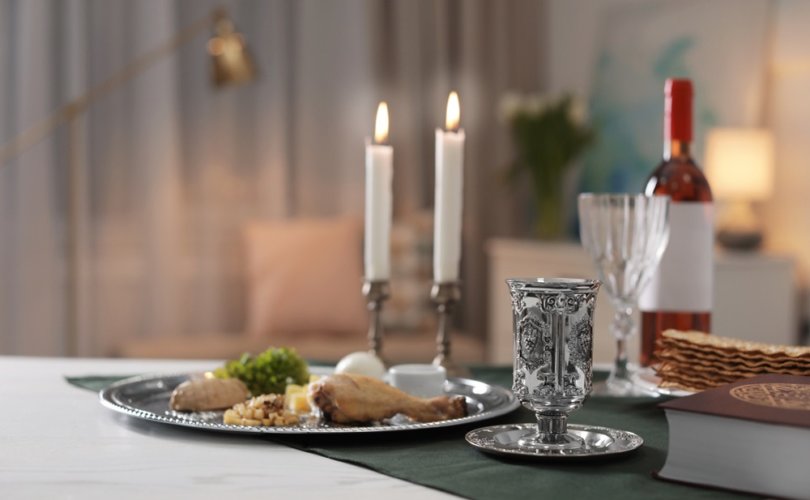 CORNWALL, Ontario, April 24, 2020 (LifeSiteNews) — An Ontario pastor was fined for violating “social distancing” health rules because he held “a seder night” at his residence.

Rebel News first reported about the incident, which took place earlier in the month. A video report of the altercation shows Cornwall police handing Pastor Andre Rose, who runs Watchman Ministries, a fine for $880.

According to the Rebel News report, police were allegedly tipped off by neighbors that Rose was holding an event at his home.

“So, you guys know the Canadian Charter, right? We have the right to peaceful assembly,” says Rose to the police officer. The officer can be heard saying that yes, you do have that right but “this is a state of emergency we are under.”

Rose was told by police that he had to disassemble or face a fine. He refused and was served the fine, saying to officers, “We’re not paying it.”

Rose said there were five adults in total in attendance at his home for the seder night. In the Rebel News report, Rose noted his alarm regarding the fine.

“Frankly, this is my home and we were celebrating Passover weekend,” Rose said in the video report. “I think it’s malicious, what they’re doing right now, and I strongly feel like, you know, this is a hit for not just people that do have the coronavirus, but for those that don’t. It’s causing a lot of problems in society.”

In the video, Rebel News reporter David Menzies asks Rose if the fine amount is a big deal, to which Rose says, “$880 feeds me, my wife and my son for almost two months. That’s a lot of money.”

Rebel News will be providing Rose with a lawyer to help him fight the fine, with funds from its crowdfunded initiative called FightTheFines.com.

In the video report, Menzies interviews Sam Goldstein, the lawyer retained by Rebel News to help Rose fight his fine. Goldstein says this case intrigued him because he is concerned that authorities are overreaching, abusing “the powers that have been given to them under the emergencies act” during the pandemic.

“The charter is still supreme law in this country,” said Goldstein.

Recently, health authorities from Saskatchewan banned a drive-in Easter Sunday service at a small-town Canadian church, saying it would have constituted a “mass gathering” in violation of its coronavirus health orders.

The Canada-based Justice Centre for Constitutional Freedoms (JCFF) served a legal warning to the Saskatchewan Health Authority, saying it had violated the rights and freedoms of worshipers from the Nipawin Apostolic Church.

The government of Saskatchewan later reversed the decision by its health authority banning drive-in religious services and issued guidelines that recognize the right for churches to hold such services as long as safety precautions are heeded.

A few weeks ago, the JCCF warned that Canadians’ rights are being trampled because of the coronavirus lockdown measures. The Alberta government is toying with the idea of using people’s cell phones to track one’s whereabouts in the name of combating the coronavirus.

Pro-abortion prime minister Justin Trudeau said in late March that “all options are on the table” when it comes to combating the coronavirus. This includes the possibility of tracking Canadians cell phones via a dedicated app or through one’s cell phone provider.

Last week, Canadian Privy Council president Dominic LeBlanc said he is interested in drafting legislation that would make it a criminal offense in Canada to “spread misinformation” regarding the coronavirus that could “harm people.”

LeBlanc’s idea was met with a strong backlash from opposition politicians and media pundits alike.

Canada has been in a nationwide lockdown since early March, with all public schools, churches, sporting events, sit-down restaurants, and most stores deemed non-essential shut. As of today, Canada has registered just under 40,000 cases with 1,996 deaths.