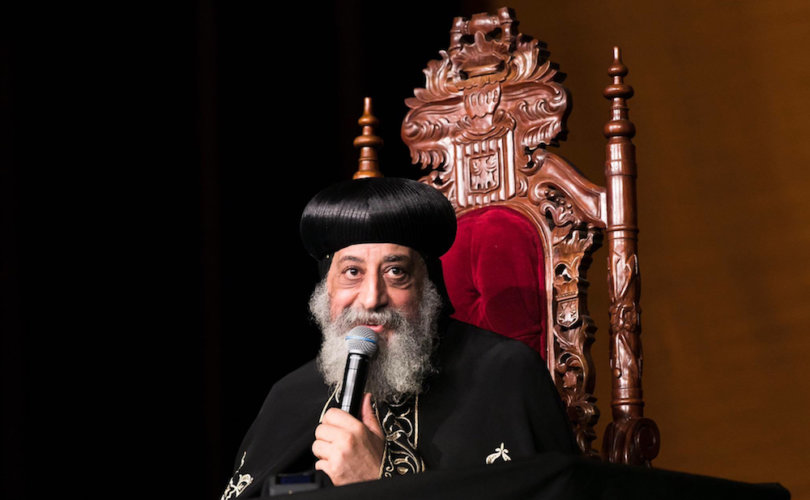 SYDNEY, Australia, September 6, 2017 (LifeSiteNews) — The leader of Egyptian Christians says there is no such thing as gay “marriage.”

“According to the Holy Bible, when you read either in the Old Testament or the New Testament, there is no same-sex marriage at all,” Coptic Pope Tawadros II responded to press questions about Australia’s popular referendum on homosexual “marriage.”

Such a union “is completely refused from the Christian faith,” he flatly stated. The Patriarch is visiting the faithful in Australia for 10 days.

Homosexuality “is not acceptable,” the pope, who was elevated in 2012, continued. “It is considered a sin. It is sin.”

“Our constitution as Coptic Christians is the Holy Bible,” Father Angilos Antoun of St. Mina and St. Abanoub Coptic Orthodox Church in Dayton, Ohio, told LifeSiteNews.  “God said (one man and one woman) is the only way to have a marriage.”

“We love all people, any religion, but we follow Jesus Christ,” Fr. Antoun quickly added.

Tawadros said much the same thing to guide Coptic youth. He encouraged young Copts at the International Convention Centre in Sydney to “fight for what is right” regarding the national referendum on same-sex “marriage.”

A coalition of more than 150 evangelical leaders signed a “Nashville Statement” affirming one man and one woman marriage, calling homosexuality and transgenderism “an essential departure from Christian faithfulness.”

And although recently his appointments and actions cause concern among conservative faithful, Pope Francis reiterated last year what Christianity has always taught.

“There are absolutely no grounds for considering homosexual unions to be in any way similar to or even remotely analogous to God’s plans for marriage or family,” Francis wrote in “The Joy of Love.”

Tawadros is the pastor of 20 million Copts in Egypt and another 2 million worldwide.  His official title is “Pope of Alexandria and Patriarch of the See of St. Mark.”

The Apostle Mark, after missionary activities with Paul and Barnabas, went to Egypt in 49 A.D. When he first arrived in Alexandria, his shoe came apart and he sought a cobbler to repair it. The cobbler seriously injured himself fixing Mark's shoe. Mark made clay of his spittle and spread it on the cobbler's hand, which was instantly healed. News of the miracle spread and masses of the Alexandrians were converted to Christ.

Later, after Sts. Peter and Paul were martyred in Rome, Mark went to Egypt again. He preached the Gospel in Libya and the African interior, exorcising many.  Near Easter, Mark was arrested by angry pagans, bound, and dragged over the cobblestones, all the while giving thanks to God.  The next day, Mark was dragged again, to his martyrdom.

The Coptic Liturgy is still called the Liturgy of St. Mark.