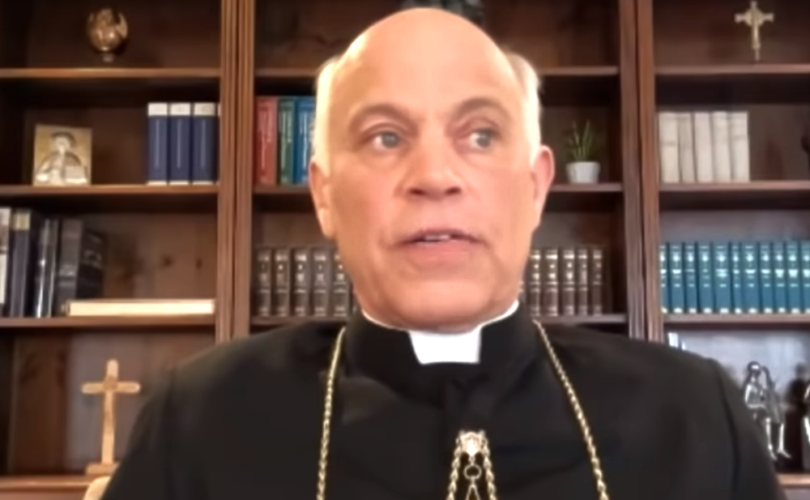 SAN FRANCISCO (LifeSiteNews) — Archbishop Salvatore Cordileone responded to criticism that he was politicizing the Eucharist in banning House Speaker Nancy Pelosi from the reception of Holy Communion “until she publicly repudiate her support for abortion ‘rights’ and confess and receive absolution for her cooperation in this evil in the sacrament of Penance.”

The archbishop of San Francisco said he has been clear all along that his “purpose is pastoral, not political.”

“One would have to demonstrate that one is doing that for a political purpose,” he declared. “I’ve been very clear all along. My purpose is pastoral, not political. I am not campaigning for anyone for office. As a matter of fact, my preference would be for Speaker Pelosi to remain in office and become an advocate for life in the womb.”

The archbishop then turned the accusation of politicizing the Eucharist on its head by pointing out that politicians can use the reception of Communion for a political end. “I would also point out that it’s possible to politicize the Eucharist in reverse, to receive Communion as a means of furthering a political agenda, if one is motivated for that reason, so it cuts both ways.”

In his Letter to the faithful on the Notification sent to Speaker Nancy Pelosi, the archbishop said he had “received letters from very many of you over the years expressing distress over the scandal being caused by such Catholics in public life who promote such grievously evil practices as abortion.” He explained that after many attempts to meet and speak with Speaker Pelosi, he was bound to follow the Church’s sacramental teaching and constant discipline regarding the reception of Holy Communion, in particular canon 915 of the Code of Canon Law, which states, “Those … obstinately persevering in manifest grave sin are not to be admitted to Holy Communion.”

In his Letter to priests of the Archdiocese on the Notification sent to Speaker Nancy Pelosi, Cordileone explained that in the application of canon 915, there were “three pastoral motives that have also guided my discernment here: responding to the demands of justice, moving the offending party to conversion, and repairing the scandal caused.”

He referenced the confusion and scandal caused by Pelosi’s strong advocacy of abortion, which has recently found expression in her announcement “that she intends to codify the Supreme Court’s Roe v. Wade decision into the law of the United States.” The archbishop accompanied his letter with a document “chronicling in detail her historical public record on the issue of abortion.”

Underscoring the pastoral nature of the Church’s opposition to the evil of abortion, the archbishop enjoined his priests to preach courageously about the gravity of the sin.

First, preach about it.  This is no time to be intimidated into silence. Do not dodge addressing the grave evil of abortion, but do so, obviously, with great pastoral sensitivity, recognizing that many of your people in the pews listening to you have been personally affected by this terrible scourge.

Cordileone also emphasized the spiritual nature of the struggle to end violence in the womb. “Let us not fool ourselves,” he said, “this is, essentially, a spiritual battle. It is not poetic rhetoric to call the proliferation of abortion demonic. The prophets of old excoriated the people of Israel when they passed over to the worship of Moloch, sacrificing their children to this pagan idol (cf. Lev 18:21; Lev 20:2; Ps 106:37-38).”

As a spiritual response, the archbishop called for a renewed living of consecration to Mary, praying the rosary, fasting, Eucharistic Adoration, and the recitation of the St. Michael prayer after Mass through the archdiocese.

In the midst of public criticism, several other fellow bishops have supported Cordileone in his prohibition of admitting Pelosi to Communion.