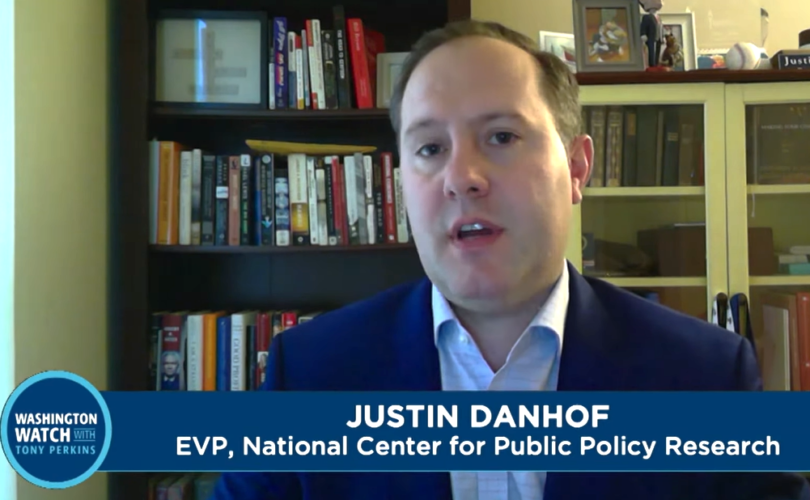 MIAMI (LifeSiteNews) – A leading corporate activist warned Sunday of the power that leftist groups wield by using big business as the “back door” through which they push their woke agenda.

While the Environmental, Social, and Governance (ESG) investment “dictates of the Davos crowd” — that is, the World Economic Forum — may be “ridiculous,” they “rule much of society,” said Justin Danhof, head of corporate governance at Strive Asset Management, at this year’s National Conservatism conference.

Danhof, however, framed ESG more generally as “whatever [a] leftist interest group is trying to achieve in society by using big business as a vehicle.”

“Why do they use big business as the vehicle? It’s because whatever they can’t get through their front door — through the courts, through the legislatures — they get through the back door, through corporate America to affect business culture, which then permeates the rest of American culture,” Danhof explained.

He cited as examples of this “backdoor” approach a few ways in which businesses have recently bypassed the U.S. legislature and courts to propel their left-wing agenda, such as paying for women’s travel costs to obtain an abortion after the reversal of Roe v. Wade.

Another instance of this modus operandi is shown in the absence of government mandates for affirmative action, Danhof argued, noting that “shareholder activists simply demand that companies [enforce] racist policies.”

Danhof highlighted three main reasons leftists focus so much energy on corporate action: “Corporations are much more amenable to pressure than most of our politicians;” they “can move more quickly than the political legislature to effect change;” and they “can have an immediate economic impact on a target region.”

“How does the left influence corporate action?” One major way, Danhof said  is “through shareholder votes.”

“Thousands of votes are cast each year that have a dramatic effect on the collective culture. that take place at the annual shareholder meetings,” he noted, adding that “there are dozens of liberal groups” representing “billions of dollars in assets that annually dedicate significant resources to filing these resolutions.”

“There is absolutely no doubt that the left has rigged the corporate proxy vote,” Danhof asserted.

Shareholder votes are important not just for their immediate influence but also because they “move the cultural needle.” This is so much the case, according to Danhof, that “what the activists are demanding today will become mainstream some three or four years” later.

Danhof proposed another big reason “so many individuals and organizations are going the wrong way” today: The agenda of Blackrock, the largest asset manager in the world, with trillion dollars under management.

According to Danhof, “It wasn’t until 2018, once they had become the world’s largest asset manager that they pulled a bait and switch,” and resolved to “be much more aggressive in voting their proxy battles,” “specifically related to ESG” investments.

He went on to explain that in 2018 they went so far as to vote against 5,400 board members “because they weren’t taking enough action” on climate change, in the view of BlackRock CEO Larry Fink.

“250 years after we declared independence from the British, we’re battling a new monarchy,” remarked Danhof, pointing out that the two biggest investment firms in the world, Blackrock and Vanguard, “hold 20 trillion dollars of assets in management.”

“That’s approximately the GDP of the United States,” Danhof pointed out.

The anti-woke activist is calling for “engagement” instead of boycotts to fight back against these ESG policies, arguing that “the history of conservative boycotts” has been “an epic failure.”

“Practically, there’s no way to boycott your way out of this problem. We’d have to return to the age of hunter-gatherers and make our own clothes and shelter,” Danhof said.

Instead, Danhof is calling for conservatives to make their voices heard loudly, publicly as well as directly to corporations.

“Last week, we sent a public letter to Chevron. We told them to stop listening to their shareholders,” including BlackRock, Danhof shared.