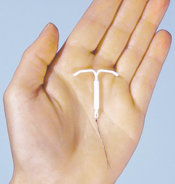 Columbus, OH, November 11, 2015 (LifeSiteNews) – A writer for Cosmopolitan Magazine has shared the excruciating pain she experienced after her newly-implanted IUD pierced her uterus.

Cosmopolitan has long shown its positive bias toward the abortifacient intrauterine device, despite the risks associated with the device, which in addition to uterine perforation, include ectopic pregnancy, pelvic inflammatory disease, other complications, injuries and even death.

Kristen Oganowski’s piece titled, My IUD Punctured My Uterus, but My Doctors Didn't Believe Me started out following Cosmo’s line supporting the IUD.

“IUDs are generally fantastic birth control options,” she stated. “They are effective, low-risk, and can give women peace of mind about preventing pregnancy for years at a time.”

But her post ultimately flies in the face of the magazine’s pro-IUD position. Instead she takes readers through her excruciating experience, highlighting the serious physical damage that can occur when a foreign body is placed in a woman’s womb.

Oganowski’s IUD was implanted after she gave birth to her first child 10 years ago. Her difficulties began as soon as the abortifacient contraceptive device was inside her.

“When I eventually stood up, I felt faint and nearly collapsed into the chair in front of me,” Oganowski wrote in the November 10 column. “I went straight home from the procedure, having taken only Motrin for the pain. I had to crawl from my car to the front door. Something wasn't right.”

A call to the doctor yielded advice to take more Motrin and call back if there were more problems.

Over the weekend Oganowski made several calls to the doctor as she endured bladder spasms, dull aches pervading her abdomen, other general abdominal pain and discomfort, malaise, sporadic nausea, and worse pain yet at various concentrated areas all over her abdomen.

Monday morning, 72 hours after the IUD was implanted, she tried to go to work, teaching a college philosophy class, though she was having difficulty walking and her pain was causing substantial nausea.

“In fact, the pain, the wooziness, and all the strange sensations I was experiencing made it nearly impossible for me to decipher a simple multiple choice quiz with my students,” Oganowski wrote. “And so I looked at them, told them that class was canceled, and asked one of them to walk me to my car. By the time I got home, I was feeling pain whenever I sat down. Walking caused discomfort in my rectum.”

Oganowski went to her doctors, at which point she learned the IUD had punctured her uterus during insertion and had traveled completely outside of her womb, and was wedged between her bowels and her uterus. This put her at risk for damage to other organs and abdominal infection. She underwent laparoscopic surgery the following day.

In summarizing the situation for her column, Oganowski tried to downplay the complications she suffered.

“As I reflect on this experience now, nearly 10 years after the fact, it isn't the perforation itself that was so traumatic and frightening,” she said.

Oganowski stated she was willing to accept the risk of what she termed a “relatively rare side effect” in IUD-induced uterine perforation.

“What I still find traumatic and frightening, however, is that my doctors and nurses didn't listen to me the first, second, and third times I expressed my concerns to them,” she wrote.

Oganowski said if she hadn't been persistent, things could have been so much worse. “My first IUD was my last IUD,” she concludes.