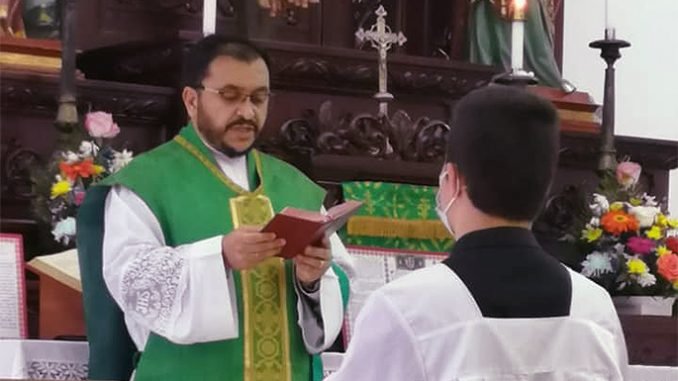 ALAJUELA, Costa Rica (LifeSiteNews) – A Costa Rican bishop suspended a priest in his diocese and sent the cleric to a psychological treatment clinic for celebrating the Mass according to the Missal of Paul VI while using Latin and facing ad orientem.

Father Sixto Eduardo Varela Santamaría has had his ministries restricted and been placed on a mandatory six-month “sabbatical” by Bishop Bartolomé Buigues Oller of Alajuela after he offered the Novus Ordo Missae (NOM) in the traditional (and still official) tongue of the Church and following the rubrical direction of facing ad orientem, according to Catholic World Report.

A letter from the diocesan communications director, Father Luis Hernández Solís, explained that Varela had already been warned by the bishop “two previous times” against celebrating the NOM in Latin, following one instance thereof. Varela previously celebrated the Traditional Latin Mass (TLM) according to the 1962 Missal but reportedly ceased to do so after Buigues ordered him to stop, owing to the Pope’s most recent motu proprio Traditionis Custodes.

The Pope declared in his July 16 directive that the missals promulgated by Paul VI and John Paul II “are the unique expression of the lex orandi of the Roman Rite,” granting permission to diocesan bishops to regulate and restrict the use of missals prior to the reforms of 1970.

The Alajuela communications director alleged that Varela “continued to celebrate the Tridentine (TLM) after the publication of Pope Francis’ motu proprio Traditionis Custodes” and that his punishments, such as being removed from his parish and enrolled in a psychological treatment center, “are expected to be measures that will restore the ecclesial communion and the priest’s well-being.”

But according to Canon 928 of the 1983 Code of Canon Law, “[t]he eucharistic celebration is to be carried out in the Latin language or in another language provided that the liturgical texts have been legitimately approved,” meaning that Varela was acting within the bounds of the law when celebrating the NOM in Latin.

Furthermore, testimony from the Summorum Pontificum Association in Costa Rica affirms Varela’s obedience to the bishop’s command to stop celebrating the TLM, and that the priest subsequently celebrated the NOM exclusively, using Latin and facing ad orientem. Of Varela’s celebration of the NOM, the association said that Latin is “not only permitted by the existing liturgical norms but not addressed at all by Pope Francis in his Motu Proprio.”

The Summorum Pontificum Association told ACI Prensa that they had requested permission from Bishop Buigues to have Varela continue to offer the TLM after Francis’ restrictions, “something that the group has been doing for eight years, but the request was denied.”

The association explained that Buigues provided “a truly confusing reason” for his decision to restrict the Latin Mass. The group said permission would only be granted by the bishop if they had been “in existence before 1970” or were “related to the schismatic Society of St. Pius the X (SSPX) something that is not mentioned either by Summorum Pontificum or Traditionis Custodes.”

Varela explained in an audio recording obtained by Catholic World Report that he is being sent to Mexico for three months “to an institute that the bishop has designated so that they can accompany me spiritually, psychologically, and medically.”

Varela confirmed in the voice message that he had not celebrated the TLM “since the bishop’s decree … but did continue to celebrate in Latin the Novus Ordo as a way to accompany some of the faithful.”

Given that no canonical procedure was broken, Varela recognized that he could contest the bishop’s decision, “but I will do none of that. I love the Church,” he said.

The Costa Rican Bishops’ Conference responded swiftly and harshly after the Pope’s restriction of the TLM, issuing a decree that “there is no objective justification for the use among us of the liturgy prior to the reform of 1970” within days of the motu proprio’s release.

The Conference moved to ban not only the Latin Mass outright within Costa Rica’s eight dioceses but also the “prayers, vestments or rites” associated with the pre-1970 missal. The Mass promulgated after the Second Vatican Council “must be preserved from any element coming from the ancient form,” the bishops wrote.

According to the nation’s bishops, “[s]ince the previous norms, instructions, concessions, and customs are ‘abrogated,’” per article 8 of the motu proprio, “the use of the Missale Romanum of 1962 or any other of the expressions of the liturgy prior to 1970 is no longer authorized,” and “no priest is authorized to continue to celebrate according to the old liturgy.”

Experts and commentators have since questioned the legal basis and legitimacy of the Pope’s attempted restrictions on the TLM. Theologian and liturgical expert Dr. Peter Kwasniewski argued that the document’s “foundational falsehoods” suggest a lack of binding authority. “An instrument is vitiated if it is promulgated on a false basis, resulting from the legislator’s lack of due knowledge and regnative prudence,” he wrote.

Dr. Joseph Shaw, chairman of the Latin Mass Society, raised questions over the motu proprio’s faithfulness to the documents of the Second Vatican Council, highlighting the possibility of contradictions between the Pope’s directions within Traditionis Custodes and both Sacrosanctum Concilium and Orientalium Ecclesiarum, despite his vigorous defense of the “binding character of Vatican Council II.”