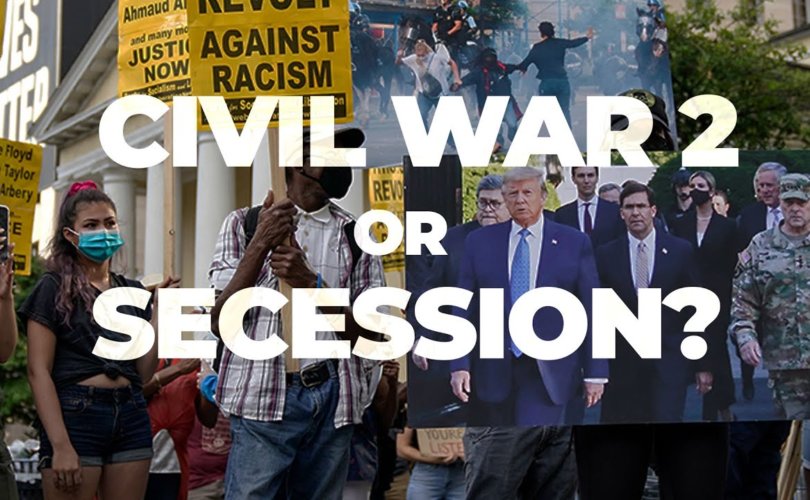 July 2, 2020 (LifeSiteNews) — Radical leftists have escalated the culture wars to new heights in recent weeks. With each passing day, the out-of-control mob is growing ever more insane as it tears down statues of America’s Founding Fathers and increases its attacks on Christianity.

“I think it’s more likely now,” Buckley said of a possible U.S. breakup. “It’s all a question of who wins and who loses.”

“If Trump did win [in 2020], if the left thought that after all of its years pretending that he’s an illegitimate president, if they’re faced with another four more years of Trump, then God knows what could happen.”

Buckley is the author of American Secession: The Looming Threat of a National Breakup. He points to Czechoslovakia as an example of where secession movements have succeeded in the past. He believes that secession is not a bad thing and that as a democratic tool it is preferable to war.

The recent Supreme Court ruling in favor of transgenderism was also discussed during the interview. Buckley noted that social conservatives are essentially being told they are “barbarians” for their beliefs and that this is not good for the country.

“Part of our problem is we’ve got a culture being imposed legally from Washington [that] doesn’t work for the entire country….same-sex ‘marriage’ laws…abortion laws.”

Many of these laws are becoming irreversible, he said, and “that makes people in more conservative parts of the country feel not merely that they’re not represented but it’s communicated to them that they are barbarians for even objecting. That’s got to fray the sense of nationhood.”

Buckley concluded that, “our sense of being American at this point, June 2020…is so weak that I can easily see people [saying] ‘this is not working.’”

The questions Americans must now ask themselves are: Are we at a place in American history where secession is likely? Even probable? What should patriotic American citizens do in response to these riots? How can the U.S. ever recover and unite itself again? Scripture speaks of there being a time for peace and a time for war. Which period is the U.S. in right now? What’s the way forward?