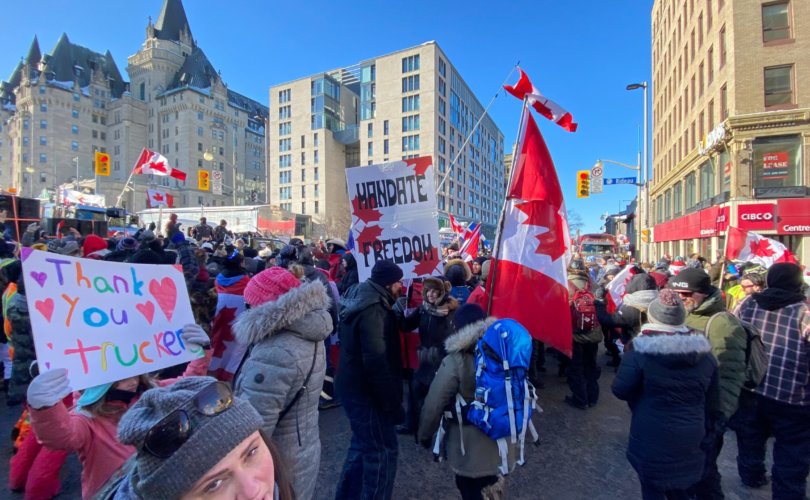 (LifeSiteNews) — While media and government continue to refer to the Freedom Convoy protesters in Ottawa and around the country as occupiers, far-right agitators, and even insurrectionists, reports of violent crime have only been linked to those opposed to the protesters, not the protesters themselves.

As of Friday, February 11, the Ottawa Police Service (OPS) has yet to report an arrest of a demonstrator for an act of violence. Meanwhile, the city of Winnipeg last week arrested a person wearing a mask alone in his vehicle for running down four freedom protesters. Despite the seriousness of the offense, the media and government have maintained the narrative that it is the non-violent protesters who are a threat to public safety.

Looking through OPS news releases for the past two weeks, all of the reported arrests made in connection with the Freedom Convoy demonstrators have been non-violent offenses. The bulk of the arrests have been various traffic violations and charges of mischief, including offenses related to carrying or delivering fuel to truckers.

LifeSiteNews reached out to the Ottawa Police Service to confirm that there have yet to be any arrests of protesters for acts of violence and were told that the official news releases contain all the relevant information.

An investigative report from Canada’s state-funded media, the Canadian Broadcasting Corporation (CBC), quoted Amarnath Amarasingam, Queen’s University assistant professor of religion and researcher of “radicalization and extremism,” as saying “police initially placated protesters because they prepared for the wrong outcome and assumed they would engage in overt violence.”

According to the report, protesters have broken “many bylaws … But for the most part, their actions didn’t cross the line into criminal acts and resulted in fines, not jail time.”

Despite the reports of non-violence, Ottawa councilwoman Diane Deans referred to the city of Ottawa as being under “siege” by demonstrators and went as far as claiming that the protesters were part of a “nationwide insurrection.”

Unsurprisingly, major media outlets have been hesitant to draw attention to, and quick to forget, the single most violent action taken in relation to the protests thus far, ostensibly because the violence was committed by the “wrong” group in the eyes of the mainstream narrative.

While consistently running inflammatory headlines such as “Opportunity to end convoy protest peacefully is slipping away, experts say,” when a counter-protester performed an intentional hit-and-run with an SUV resulting in the injury of four anti-mandate protesters in Winnipeg, the legacy media’s title for the story was “Man charged in Friday night hit-and-run at Winnipeg protest against pandemic restrictions.”

In addition to the violent vehicle attack from a person against the protests, there have also been accusations against the police officers for employing what many consider to be unnecessary and disproportionate force.

In one “viral” video, an OPS officer can be seen aggressively arresting an elderly man after he was pulled over for honking his horn while driving through the protest. According to the arresting officer, honking a horn is considered an “offence.”

Despite efforts by the government to shut down the protests, most notably by using police to confiscate their supplies and fuel, and even employing the courts to freeze millions of dollars in donations, the main protest in Ottawa is now headed into its third weekend.

While many Canadian governments are remaining steadfast in upholding COVID mandates, the protests have also put massive pressure on the COVID regime, leading to substantial changes.

In western Canada, the provinces of Alberta, Manitoba, and Saskatchewan have started the removal of all COVID restrictions, and the federal Conservative Party booted its leader and with their newly appointed interim leader petitioned that Prime Minister Justin Trudeau end all federally implemented measures.

Even Trudeau’s own Liberals have started to turn on him, with three MPs (Members of Parliament) now agreeing with the protesters that his pro-mandate approach and disdain for the vaccine-free has been divisive, unscientific, and politically motivated.