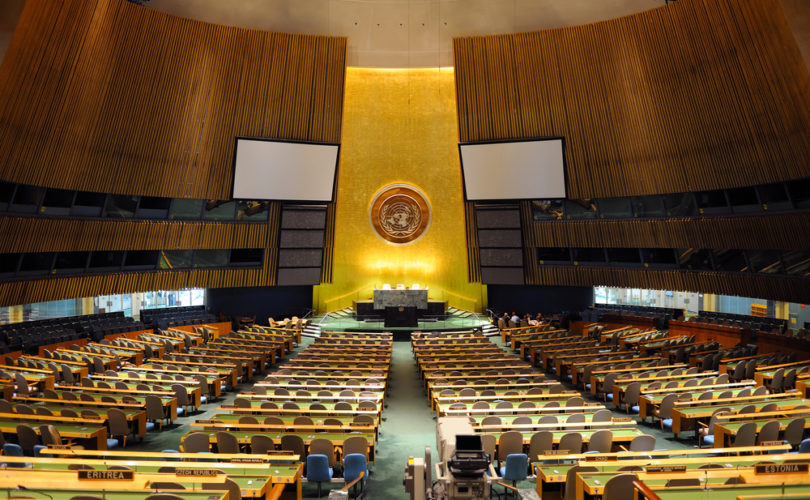 March 16, 2015 (C-Fam.org) — This year – the 20th anniversary of the Beijing Women’s Conference – thousands of delegates and civil society representatives are gathered in New York to assess 20 years of progress on women’s issues.

Rather than haggle late into the nights as is done each year at the UN Commission on the Status of Women, countries adopted a political declaration on the first day of the two-week conference. It makes no mention of sexual and reproductive health or rights, terms linked to abortion and sexual issues.

Feminist groups were angry the declaration – that they called “bland” – was finished before they arrived in New York. They called it a “political failure” for not recognizing feminist organizations, among other complaints.

Trade unions demanded governments consult with them and women’s groups in future meetings, and ensure other privileges, such as the UN’s new development goals must require teachers be “professionally trained” – a move that would discriminate against homeschool mothers, humanitarian workers or qualified women without a teaching degree.

In their opening statement, African nations emphasized they “reject abortion to be promoted as a method of family planning” while welcoming the “consensual understanding between partners” on the number and spacing of children.

Yet they are also “concerned by the spread and use of harmful contraceptives for African women” and want methods “that are not detrimental to women’s health.”

A few leaders of women’s groups were chosen to speak on behalf of civil society at the opening ceremony.

She told the room of delegates that their disappointing progress on feminists’ priorities can be chalked up to the “overwhelming lack of political commitment and financial resources, plain old sexism and misogyny, along with increasing religious fundamentalism.”

Alpizar chastised the diplomats for “largely excluding” groups from the negotiations of the political declaration and asserted, “Sexual rights and reproductive rights and health should not be used as trade-offs among governments in negotiations.”

Outside the UN, numerous workshops for the over 8,000 participants are criticizing prostitution, an issue that divides feminist activists. They are drawing overflow crowds of grassroots women activists and parliamentarians. Prostitution destroys a person’s self-worth and breeds violence, they argue.

Prostituted women are routinely beaten, sent to the hospital for fractures, and violated with objects, yet do not think it is violence “because the men paid for it,” said Ruchira Gupta of Apne Aap Women Worldwide.

When the Gates Foundation allotted $500 million for condom distribution in India, pimps and brothel managers were hired as “peer educators,” Gupta said. Their partner PSI created a notion of “ethical demand” for buying sex. They ran ads stating, “It doesn’t matter what sex partner you choose, choose the right condom.”

“The program was designed to protect men buyers from disease,” not to help women, said Gupta.

When a woman or girl “cannot say no to unwanted sex, how can she say no to unprotected sex.”

In 2012, UNAIDS and the UN Population Fund released a report calling for decriminalizing “sex work.” UN Women said it “supports the decriminalization of sex work.”