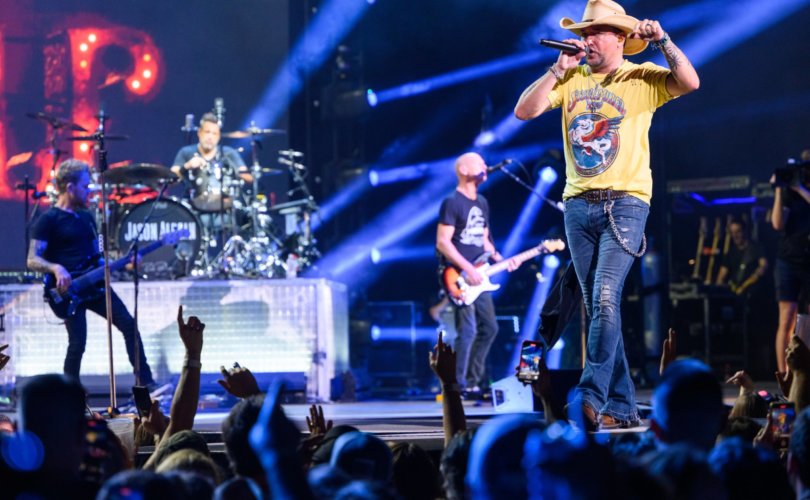 (LifeSiteNews) — Popular country singer Jason Aldean praised maskless concert-goers during a show in North Carolina last week, expressing his view that masks and COVID shots should be a “personal choice” rather than a mandate.

“It’s been about 18 months since me and the guys have been able to play some shows,” the four-time Grammy nominee told his audience.

The Georgia native, whose “Back in the Saddle” tour has had him performing in multiple states since the beginning of August, including Virginia, New Jersey, New York, and Ohio, told the North Carolina crowd of maskless music fans that decisions about masking or getting a hastily-produced coronavirus shot should be up to personal discretion, not government mandate.

“I’ve been saying this the last couple weeks, I’ll tell ya I’ve taken a lot of heat for it,” Aldean said, “but I’ll say it again: that vaccines, masks, all that stuff, should be a personal choice.”

“In fact, I look around and I don’t see many [masks] out here tonight,” the singer added, amid rousing applause.

The “Dirt Road Anthem” singer made similar comments earlier in the month.

As reported by the Federalist, Aldean told fans at an August 7 concert in Wantagh, New York that he has “had just about enough of that s**t,” referring to restrictive COVID-19 measures like mask mandates.

The Federalist noted that as the venue’s Jumbotron scanned the audience, “not a single mask-wearer was caught on screen.”

Aldean’s fans reacted to the star’s comments with an outburst of applause and chats of “U-S-A.”

The outspoken country-singer’s wife Brittany has made no secret of her political views either, publicly expressing her support for former President Donald Trump and encouraging people to “stand for what you believe.”

“I personally don’t give a d**n if people don’t agree with me,” the mother of two said. “I think it’s important now more than ever to stand for what you believe, even if it ‘goes against the grain.’ Do your research, and form your own opinion — speak out if you wish. But most importantly, don’t bully people who feel differently than you.”

The Aldeans are not the only celebrities to express views contrary to the prevailing narrative of COVID-19 and related restrictions and mandates.

As previously reported by LifeSite, last month legendary rock and blues guitarist, singer, and songwriter Eric Clapton announced he would refuse to perform at venues that force concert-goers to prove they’ve taken a COVID-19 shot as a condition for entry.

The 76-year-old who suffers from emphysema reported “disastrous” side effects after he took both doses of the AstraZeneca injection, leading the 17-time Grammy Award winner to fear he might never be able to play guitar again.

“[M]y hands and feet were either frozen, numb or burning, and pretty much useless for two weeks. I feared I would never play again,” he said.

Clapton said he also suffers from peripheral neuropathy and believes he should never have taken the injection, “[b]ut the propaganda said the vaccine was safe for everyone.”

Earlier this year, former Saturday Night Live cast member and popular comedian Rob Schneider blasted the mass vaccination agenda gripping the nation and the world, arguing that the “unprecedented coercion” is “more of a danger to our society than anything we have faced during this last year.”

Aldean’s comments came just ahead of the U.S. Food and Drug Administration’s decision to “fully approve” the Pfizer jab, leading many to anticipate an increase in COVID jab mandates and required proof of vaccination for public venues.

It remains to be seen whether concert-goers in the future will have the option to attend in-person events without showing proof of having gotten the COVID jab.

As reported by the Federalist, COVID-19 protocols for entertainment venues since the beginning of the COVID-19 pandemic have “been in constant flux.”

Before Aldean’s August 7 New York concert, global entertainment giant Live Nation announced that musicians would be able to choose the COVID-19 “guidelines” to implement for their shows.

But Live Nation flip-flopped a week later, announcing that fans must either show proof of having gotten the COVID jab or a negative COVID test to gain entrance to concert venues beginning October 4, regardless of the views or wishes of the headlining performer.

With the green-lighting of the Pfizer jab, it is likely that a requirement to show proof of vaccination will become regularized, especially for large in-person events like concerts.