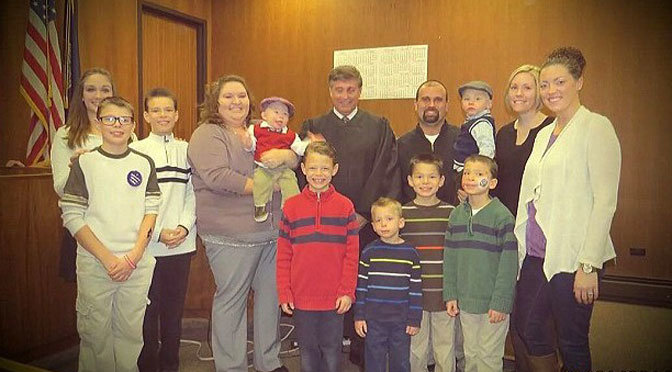 December 7, 2015 (LiveActionNews) — Scott and Melissa Groves became engaged to be married six months after their first date. One year later they were newlyweds and parents to Melissa’s daughter Autumn from a previous relationship. Their life together was just beginning and they were eager to add more children to their family. According to People, Autumn, age five at the time, even asked Santa for a baby brother.

Little did they know that she was about to get her wish, big time.

According to The Daily Mail, the couple was heartbroken to learn that having biological children was likely not in the cards for them. After visiting an aunt who was a foster parent, they decided to become foster parents as well, and within a few weeks of earning their license they received a phone call regarding two young brothers – Noah, age three, and Chase, 22 months.

“Almost instantaneously these two seemed to capture our hearts, and it wasn’t very long before I knew that if the chance arose I wanted to have them in our lives forever,” Melissa Groves told The Daily Mail. “Perhaps it was fate, perhaps it was divine intervention, I don’t know, but what I do know was that the boys’ ‘short’ stay with us turned into adoption.”

The couple became foster parents in 2003, and over the next decade, their lives would be forever changed by that decision.

Within just a few weeks of legally adopting Chase and Noah, the case worker called to inform them that the boys’ birth mother had given birth to another baby boy. They were offered the chance to take in Baby Garrett.

“There was no question. How could I deny my sons and this new child the possibility of being together?” said Melissa Groves.

Then, to their surprise, 11 months later, another phone call about the birth of another baby boy, Hayden.

Hayden was born premature, exposed to drugs, and had a cleft lip. The Groves knew he was their son just as all of his brothers were, no matter the struggles he would face in his young life, and they didn’t hesitate to take him in. Their family was growing, and the couple was thrilled. And their joy didn’t stop there.

Their sons’ birth mother soon placed four-month-old baby Ashton with them, and then by May 2009, she gave birth to baby boy Curran who quickly joined the Groves family. And after Curran came Bryer.

Life was a calm as it could be with 7 boys and 1 girl in the house. But by October of 2013, the boys’ birth mother had another baby boy. Zayn was born premature, and exposed to drugs. He was also diagnosed with Down syndrome.

“Zayn is a complete joy,” Melissa Groves told People. “He’s happy all the time and teaches us patience and unconditional love and has changed our family for the better.”

The boys have three other biological siblings – two sisters and a brother – who live with their father’s family. The Groves keep in touch with the birth family to update them on the boys’ lives, and haven’t ruled out the of the boys meeting their birth mother if she were to turn her life around. They say they know she loves her boys and they are not blind or numb to her pain and personal battles.

“Sometimes it just seems surreal to think about back then when I struggled emotionally and didn’t understand why it wasn’t happening for us,” said Melissa Groves of the couple’s infertility struggle. “There’s all these emotions and not understanding the whys. But now to see that we have these boys and life is going well, it just makes sense. Now I see why.”

Between the laundry and the meal prep and all the rest that comes along with having nine children, life won’t be slowing down anytime soon, but it doesn’t seem like the Groves would have it any other way.