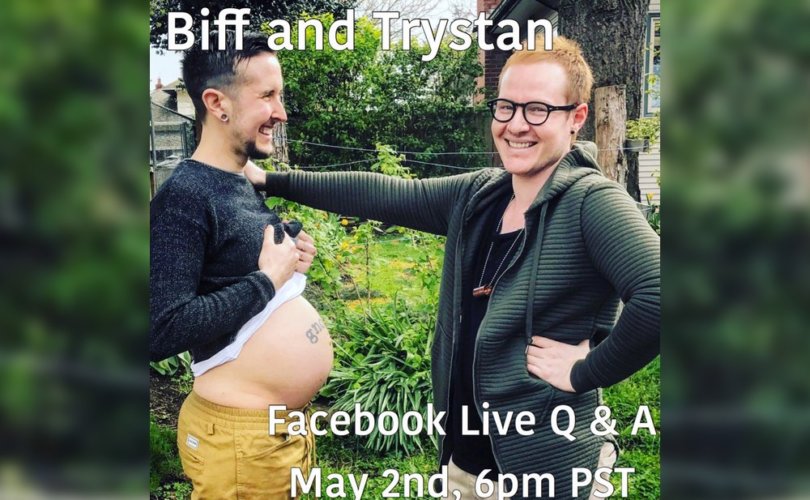 PORTLAND, Oregon, June 20, 2017 (LifeSiteNews) – A man and a pregnant woman consider themselves “accidental gay parents” because the man is gay and the woman identifies as a man.

Biff Chaplow (formerly John) and Trystan Reese have been a couple for about seven years, NBC reported in an article on the “trans pregnancy.” Reese is biologically a woman but identifies as a gay man. Chaplow is a man who is attracted to other men, but identifies as the family “mom” because “moms come in all different shapes, sizes, and dare I say… genders.”

Reese has been identifying as a man since before they started dating. She and Chaplow became the foster parents of Chaplow's niece and nephew and eventually adopted them.

…initially Chaplow and Reese thought there was a possibility the two children would be returned to Chaplow’s sister. But after the situation deteriorated, the two men filed for emergency guardianship of Hailey and Riley and years of legal proceedings followed.

“I don’t ever feel like I’ve wanted to negate or erase the fact that I was born female,” said Reese. “I am trans.”

Reese quit taking testosterone (she hasn't undergone gender “change” surgery) and became pregnant, but then miscarried the baby. The couple were successful at conceiving again. Their baby is due in July.

“We know a lot of transgender men who have babies,” Reese told NBC. “We have several in our close friend circle. So it does not seem that strange to us.”

Reese and Chaplow have used social media and their website to publicize their lives as “gay adoptive parents.” Their website explains:

Biff Chaplow is a social worker and parent. He used to work with formerly-homeless individuals on Skid Row and now supports people with mental health challenges.

Trystan Reese is a gay trans dad, working as a social justice professional. He is currently pregnant.

The NBC article was released on Father's Day. CNN has also written on Reese and Chaplow explaining that the former is a “man with a uterus.”

“To really understand why I would want to carry a baby, you kind of have to, unfortunately, dismantle some of the stories that have been told about what it means to actually be trans,” Reese said in a Facebook video that has been viewed nearly 300,000 times.

She rejects the notion that people who identify as the sex they are not “really hate our bodies.” She acknowledged that “a lot of people really do have such profound discomfort with their bodies that they would like them to line up as much as possible with the bodies of other people who share their gender.”

“Taking testosterone” to allow her to grow a beard and lower her voice was “enough for me,” said Reese. “I never wanted to change my body.”

She said she feels it was a “gift” to have been born female. “I'm okay being a man who has a uterus and who has the capacity and capability of carrying a baby…I am a feminist. I think that women are awesome. I didn't dislike being a woman. I just didn't happen to be one on the inside.”

Reese acknowledged that her pregnancy means entering “back into this sacred world of womanhood…and I don't feel like it makes me any less of a man.”

A video of the couple's daughter, Hailey, accidentally reinforces the “gender binary” when she talks about seeing her future brother or sister.

“What fears or worries do you have about…having a baby brother or sister or about me having a baby?” Reese, off camera, asked.

Conservative blogger Matt Walsh noted on Twitter that the reason the couple could conceive a baby in the first place is because of their biological bodies. Walsh's new book, The Unholy Trinity: Blocking the Left's Assault on Life, Marriage, and Gender, addresses gender ideology.

Biologically, there is only one path. And it's the same path this man and woman took. https://t.co/P8P4ElG2S1