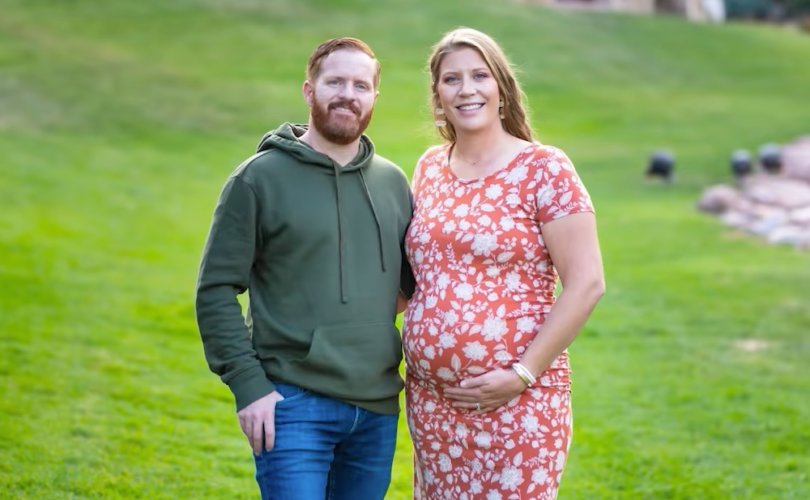 (LifeSiteNews) — A pro-life activist couple is sharing with the world how a journey across the country has brought them joy and hope after their preborn daughter’s fatal diagnosis.

The unborn baby girl, Ember Baker, is expected to live only hours after birth.

Joe and Ann Baker, who co-founded the pro-life ministry Save the Storks, today released an eight-minute film about their family of three boys and unborn daughter. Ember has a nervous system condition that will make it impossible for her to survive outside the womb.

Joe Baker opened up to LifeSiteNews about both the difficulties of coping with the diagnosis and how his and his wife’s journey around the USA with Ember has brought meaning and real hope to their lives and changed the lives of others.

“When we started the journey, literally my prayer was, ‘God, have mercy on us, please just miscarry this baby and have this be over,’ because it felt like we were trapped in a year of depression. We were so devastated to lose the beautiful girl that we had prayed for. It felt like we had lost her there,” Baker told LifeSiteNews in a Tuesday phone interview.

“We kind of had to walk through a deep well to figure that out and share that with our boys,” he told Live Action News. After the diagnosis, Baker recounted, “Ann brought this map to me, and she said, ‘I want to take Ember to all of these places.’”

“And I’m like, ‘Ann, I don’t even think she’s going to be discharged from the hospital,’ and she’s like, ‘No, Joe. We’re going to all these places between now and November.’”

Ann and Joe, who share a love for adventure and mountain-climbing and had even fallen in love with each other on the side of a mountain, proceeded to journey with Ember to all the places on Ann’s “bucket list,” including many mountains, Yosemite, and Sylvan Lake in South Dakota, where they had married 10 years before.

“Through that process of climbing mountains with my pregnant wife and our little unborn baby, [of] just talking about her and praying for her all the time, she’s really come alive in our family,” Baker said.

From that tour of America with Ember came what Baker called a “revelation” and a “perspective change” that “we haven’t lost our daughter yet, and we love her. That really is a big shift that brought joy to our journey,” he told LifeSiteNews.

During the journey, they also “really began to find hope,” Baker said.

“When you first find out this news, you’re like, ‘Doctor, what are the options? What can we do?’ There has to be a specialist in the world that will try something. Is there a one percent chance, is there a 0.5 percent chance? You almost scratch the earth trying to find that way out. What you’re trying to find is hope, and we were given no hope,” he continued.

“And the thing we wanted more than anything else at that point was hope.”

Baker recounted how Nick Vujicic, a Christian evangelist born without limbs whom Baker describes as a “great man of faith,” recently asked Baker, “Joe, do you have faith that God is going to heal your daughter?”

“I looked at him and said, ‘I have 100% faith that God is going to give my daughter a brand new body, and that we’re going to climb mountains in a new world with her.’”

It was out of that journey across America, Baker explained, that he found this perspective and “and this belief that the great miracle is the new body, is the new world, and is a redemptive world. God talks about this new heaven and this new earth. And that gives me tremendous hope.”

“We live in this broken world,” he continued, explaining how he wrestled with one of the deep questions of life: “How can there be a loving and powerful God that would allow such a terrible thing?”

Baker said that when people wrestle deeply with that question, they come to understand that God is “sad with us.” To Baker, heartaches like the one their family has endured hearken back to the beginning of human history, to the tragedy of the fall of Adam and Eve and to Cain’s murder of his brother Abel.

“You can see Eve asking a lot of similar questions [to those] that I’m asking, like, ‘How could You allow this to happen?’ “ Baker reflected.

“And it goes back to that. The world broke when we brought sin into it,” he continued.

“God wants this plan to redeem it, and his very unique plan even required His own tremendous suffering to save it. And it becomes the context of our story.”

In a Superhero Sidekick coaching podcast with Joel Smith, Baker shared his story and his thoughts on suffering.

“Suffering is something that you have to bear, and you have to find a way to find the joy in it,” he told Smith.

“We’ve found joy along the way. … We’ve found hope, and we found the perspective that God really wanted us to have this little one, and we’re so glad he did. Because we have this heavenly and eternal perspective. And all of that became possible because we decided to stay in the suffering, and find a way through it, find a pathway of joy through it,” he continued.

“Sometimes it takes suffering to grow … Even though it’s the worst case scenario, it’s nothing I’d wish to do again or wish on anybody, ever, out of it, we’re finding meaning. And one of the greatest things you long for is finding the meaning of your children’s lives, and through it we’re beginning to see that and experience that.”

During Ember’s short lifetime, she has touched the hearts not only of her family, but of family friends and even of strangers who’ve come to know her story.

“What we’ve found is, when we told people our story, the whole world came around us,” Baker said.

“Our friends came around us, people that I barely know reached out to us. We have more people that want to support us than can support us. Honestly that’s helped us carry this, and it’s showing us that our little daughter wasn’t just about us,” he added.

“She impacted a lot of people because they all wanted to know her and love her.”

Baker said that the overwhelming support and encouragement is “the beautiful part of the story” and indicated that parents who choose to abort severely disabled babies, instead of bringing them to term, lose “a huge gift” from God in their attempt to avoid suffering.

He added, “Either way, you pass through this refining fire of sorrow. There’s no escaping that. Abortion won’t escape that.”

Baker also shared how, to get their boys involved, he and Ann asked them create artwork for Ember’s delivery room.

“Our three boys talk about her every day, all the time,” Baker disclosed. “That’s just tremendous impact. They will forever know that they had a sister.”

Ann explained in their family film that they named their daughter “after the ember of a fire because they are beautiful and bright but only here for a moment.”

“We spend a lot of time around campfires as a family,” Joe told Live Action News. “And it’s just such a beautiful thing to see these embers break away from a fire and fade away.”

And yet, as Baker noted, an ember can have an extremely powerful impact: “… [A]n ember is also something that breaks away from a fire and can burn down a forest.”

As Baker shared in his film, “We want her to start a fire, and in a way that’s what we feel in our heart … that she’s lit us afire.”

Her parents expect Ember to be born in early November.

Save the Storks is an organization that partners with pregnancy resource centers to bring pregnancy services such as ultrasounds to abortion-minded women through mobile medical units called “Stork Buses” in cities across USA. The Bakers began the group after Joe saw the power of an ultrasound to move a mother to choose life.

Joe resigned as the CEO of Save the Storks  in 2019. He currently heads the business consultation group Superhero Sidekick and works with some of today’s largest pro-life organizations.