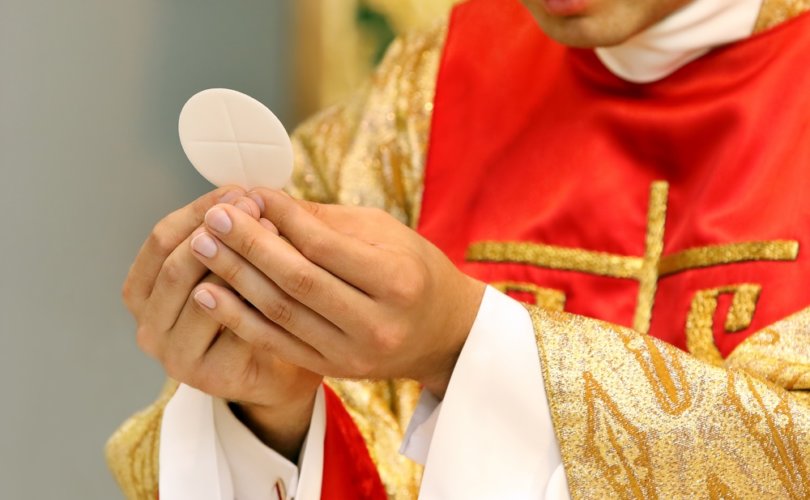 FRANCE, March 6, 2019 (LifeSiteNews) – A retired couple from the North-East of France received a prison sentence last week for having falsely accused a 71-year-old priest of sexual abuse.

Marie-Jeanne and Jean-Louis Martin of Baye-sur-Marne have been ordered to pay a fine of 500 euro each (the equivalent of $565 USD) and have also received a suspended prison sentence of three months for having mendaciously accused the priest, Father François-Jérôme Leroy, of having had sexual contact with four adolescent boys, in 10 separate letters sent to the judiciary and ecclesiastic authorities as well as associations for victims of pedophilia.

Compared with what the priest was to go through because of the slanderous accusation, the sentence handed down by the Châlons-en-Champagne court appears unreasonably lenient. In practice, the Martins have been let off with a modest fine – the maximum amount applicable for “slanderous denunciation” as false accusations are officially named in France, is of 45,000 euro, and five years imprisonment. Besides, they have appealed the sentence.

Fr Leroy himself was awarded damages of 1 euro, the symbolic minimum (1.13 US dollar), despite having been accused of a particularly disgusting crime.

The present climate of suspicion surrounding Catholic priests amid the sexual abuse crisis has created a situation where accusations are accepted and acted upon without question and deemed almost normal where clerics are concerned. In some cases, the innocent are paying for the sins of the guilty.

The affair itself is revealing of a new sort of presumption of guilt, brought in by a “zero-tolerance” attitude that leads church leaders to act against the priests for whom they bear responsibility without knowing whether they have actually done anything wrong.

In Fr. Leroy’s case, the price to pay was exceptionally heavy.

Marie-Jeanne and Jean-Louis Martin started the whole affair in March 2018 when their two grandsons, 14 and 16, were on a visit. According to the letter they sent to the public prosecutor of Châlons-en-Champagne, the local bishop, the permanent director against pedophilia of the French bishops conference, and a number of associations, the priest had sought contact with the boys, photographing them in front of a painting in the local chapel and offering to come and help the younger of the two fix his bicycle.

According to the Martins’ legal counsel, these events “frightened” them because they had “had a lot of stories about that priest.” That decided them to “report the facts,” they said. In their letter they accused Fr. Leroy of having molested four youngsters: their own two grandsons and two others whose parents were purported to have told the Martins about the abuse.

At the time, Fr. Leroy was the priest in charge of the local Foyer of Charity, one of the 76 centers founded by French mystic Marthe Robin offering spiritual retreats the world over.

On receipt of the letter Bishop François Touvet of Châlons immediately took punitive measures, without checking the circumstances of the accusation. Fr. Leroy was removed from his charge and sent to a “secluded location” far from the diocese. He was forbidden to have contact with young people and his whereabouts were made known to the public prosecutor for the duration of the judicial investigation that would take place. Retreats at the Foyer were suspended.

Aiming at complete “transparency,” as he explained, Bishop Touvet took a further step: in April 2018, he decided to make all the measures against Leroy public and even published the priest's name, to all intents throwing him to the wolves, and reminded “victims” that a support group was available.

It would soon appear that none of the accusations were founded. Over 20 witnesses were heard, all of whom completely exonerated the priest of any improper conduct. The main “victim” designated by the Martins denied that he had ever been abused. As to the parents who were supposed to have told the retired couple about improper acts on their own children, they flatly denied ever having said any such thing.

The case against Leroy was officially dropped in October 2018.

Further inquiries had revealed an interesting context that could designate the Martins’ malicious intent – and should have led the Bishop to be more cautious in his handling of the accusations against the priest. The couple, both practicing Catholics, were close to the Foyer of Charity, and had obtained accommodation in one of the outbuildings of the retreat center in exchange for a nominal rent and regular odd jobs on the estate.

According to the French daily Le Figaro, the situation slowly deteriorated: the Martins were no longer happy with the lease they had signed with Fr. Leroy in his capacity of head of the Foyer and they were in open dispute over the case.

An informed source quoted by Le Figaro said: “We already knew of accusations of pedophilia against fathers when married couples separate: now we’re finding them in cases of conflict with priests.”

To which the Martins’ lawyer retorted: “They were exploited! They were asked to do full-time work that was never paid in the end! This story was set up by the church in order to sidestep the issue.”

His defense in the slanderous accusation case was to say that the Martins did not bandy Leroy’s name in public: that was done by Bishop Touvet who according to the Martins’ lawyer, Jean Chevais, should take full responsibility. Chevais also asserted that the 24 witnesses interrogated by the public prosecution had “become afraid” to speak out.

Fr. Leroy, who successfully lodged the complaint for false accusation against the Martins, has not returned to the Baye-sur-Marne Foyer of Charity since his name was cleared; he is at present on sabbatical.

In their letter, the Martins also accused a former priest of the Foyer of Charity, who died in 2014, of having performed sexual acts on minors in the 1960’s and 70’s. Those claims are time-barred but despite the legitimate doubts regarding the couple's allegations, the public prosecution of Châlons-en-Champagne has decided to proceed with its investigations against the deceased priest, if only to allow any abused minors to obtain victim status and to check whether the ecclesiastical authorities took the necessary steps at the time.

In the present context, it should be said that bishops are strongly encouraged to act as if their clergy were more probably than not guilty of abuse – a boon for enemies of the Church and for individuals who have an axe to grind against a particular priest.