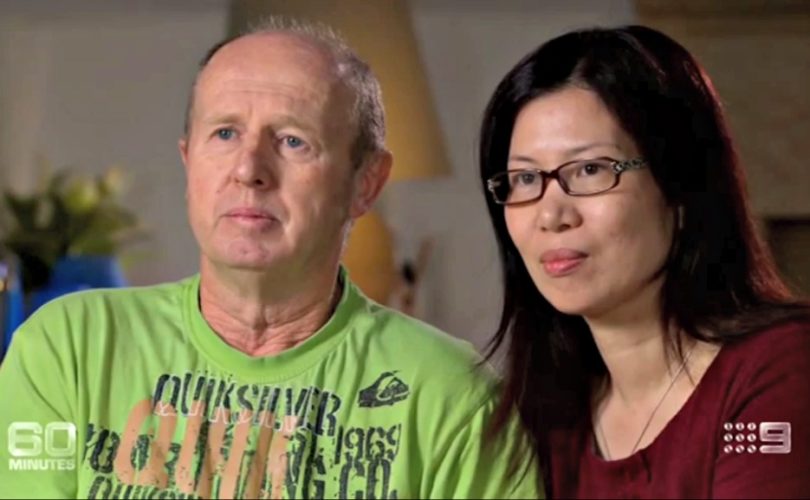 'I don't think any parent wants a son with a disability,' David Farnell told 60 Minutes, with his wife Wendy sitting at his side.

The Australian couple accused of abandoning their surrogate son in Thailand after he was born with Down syndrome have admitted that they would have preferred that the baby would have been aborted.

“If it would have been safe for the embryo to have been terminated, we probably would have terminated it,” David Farnell told 60 Minutes in an extensive interview this weekend.

“I don't think any parent wants a son with a disability,” he added, his wife Wendy sitting at his side. “Parents want their children to be healthy and happy and be able to do everything that every other children [sic] do.”

The couple also revealed that they asked the Bangkok-based surrogacy agency for a refund after learning that the baby suffered from Down’s.

“I said: 'Give us back our money. This is your fault,'” David said, explaining that they didn’t find out about the Down’s diagnosis until late in the pregnancy, at which point an abortion would have been risky. “We were very confused and we said that 'this is your fault. You must now take some responsibility for this.'”

The Farnells’ story has captured international headlines and forced the couple into hiding after Pattharamon Janbua told Thai media how the pair paid her around $12,000 to act as a surrogate mother.

But when Pattharamon eventually gave birth to twins, the Farnells only took one of the children – a healthy girl – back with them to Australia, while the other child, named Gammy, remained behind with the surrogate mother.

The Farnells claimed in the 60 Minutes interview that they didn’t abandon Gammy and intended to go back to fetch him later.

“The surrogate mother wanted to take our girl, and we were getting scared that we were going to lose her,” David said. “We had to try and get out as fast as we could.”

The couple vowed that they would go to Thailand to reclaim Gammy, even as they admitted that in the past six months since the baby’s birth they haven’t taken any steps to do so.

For her part Pattharamon has vowed in response that they will never get him back.

“I want them to come to Thailand. I will take Gammy to see them. But they will never get my boy,” she told the Sydney Morning Herald.

“You are dreaming. You are already guilty of abandoning Gammy and now you think you can get away with this.”

Gammy has suffered from numerous serious health complications, leaving Pattharamon and her husband struggling to pay for his medical bills.

After news of her predicament broke in international media, a “Hope for Gammy” fund was created, which has brought in over $240,000 in donations to date.

The Farnells, already one of the most hated couples in the world, further lost the sympathy of the public when media learned that David was convicted in the late 90s of numerous child sex offenses against girls as young as seven years old.

In the tense, emotional interview, 60 Minutes also grilled David about his past offenses, asking him whether the Farnells’ surrogate daughter would be safe in their care.

He claimed that the urges to sexually abuse children have “100 percent” stopped.

Meanwhile, the case is drawing scrutiny against the largely unregulated international surrogate trade, in which wealthy Westerners often travel to Asian countries and pay poorer women to carry their children.

In response to the case, Thai officials are cracking down on the paid surrogacy trade. A draft law has already reportedly been submitted that would ban commercial surrogacy.

Australian Prime Minister Tony Abbott has said that the case is “sad,” and “illustrates some of the pitfalls involved in this particular business.”

Meanwhile, Pattharamon is warning other Thai woman to avoid the siren call of easy cash from foreigners.

“I would like to tell Thai women – don’t get into this business as a surrogate,” she told Fairfax Media last week. “Don’t just think only for money – if something goes wrong no one will help us and the baby will be abandoned from society, then we have to take responsibility for that.”