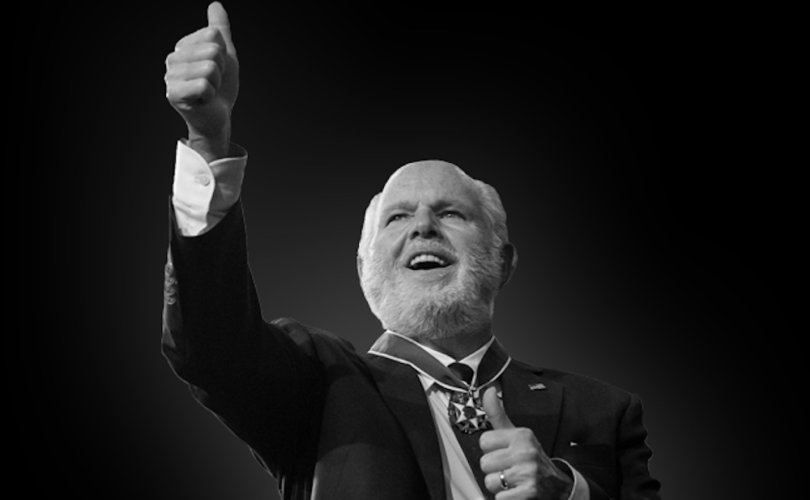 “We, the Limbaugh family, are deeply saddened to announce that our beloved Rush has died,” Kathryn Adams Limbaugh said in a statement. “Rush Hudson Limbaugh III will forever be the greatest of all time, a courageous, brilliant, gentle giant and radio pioneer. Our entire family is so thankful to everyone who prayed and cared for Rush, especially the audience he adored. Rush’s love for our country, and for all of you, will live on eternally.”

Limbaugh announced his diagnosis in February 2020, vowing to “come here every day I can and to do this program as normally and as competently and as expertly as I do each and every day,” a promise he kept going into February 2021, while occasionally relying on guest hosts as his condition dictated.

“I’ve had so much support from family and friends during this that it’s just been tremendous,” Limbaugh explained last year. “I told the staff today that I have a deeply personal relationship with God that I do not proselytize about. But I do, and I have been working that relationship … tremendously, which I do regularly anyway, but I’ve been focused on it intensely for the past couple of weeks.”

Limbaugh, whose show has been on the air since 1984 and eventually rose to 600 radio stations and 27 million weekly listeners, has been credited with ushering in the rise of conservative talk radio and alternative media more broadly. Days after his cancer announcement, former President Donald Trump honored Limbaugh with the Presidential Medal of Freedom for his “decades of tireless devotion to our country.”

In a rare media appearance since leaving office, Trump called into Fox News Tuesday to react to Limbaugh’s death, touting the bravery of Limbaugh’s battle with cancer and the impact of his commentary. “He was a very unique guy and had tremendous insight, he really got it, he was very street smart,” the 45th president said.

God Bless you Rush.
I love you. Always and ever.

The news of Limbaugh’s passing was met with an outpouring of sympathy and remembrances from talk radio colleagues, Republican politicians, and conservative activists inspired by his career:

Rest in peace to the great Rush Limbaugh.

RIP Rush Limbaugh, the creator of talk radio and by extension the alternative media, an indispensable and iconic conservative voice.

So sad. The Super Nova of American conservatism is dead.

RIP to a legend and a patriot, Rush Limbaugh. Not many people can say they revolutionized and stayed at the top of an industry the way he did. My condolences to his family.

We're incredibly sad to hear of Rush Limbaugh's passing. He was the titan of conservative media, as well as a longtime friend and supporter of the MRC.

That's the real measure of Rush's impact. He helped so many people realize they were not alone, even as the mainstream media labored to make them feel isolated and hopeless. He understood that totalitarians overwhelm and dominate ordinary people by making them *feel* surrounded.

Rush Limbaugh was the greatest broadcaster in history. The man created an industry from nothing and in the process taught several generations of Americans about the virtues of freedom and liberty. He was a giant, irreplaceable, a legend who made this country immeasurably better.

On the other hand, numerous leftists celebrated the news, with the left-wing HuffPost headlining its story: “Rush Limbaugh, Bigoted King Of Talk Radio, Dies At 70.”

The 'classy' left, 'good people' all, deliver their finest takes on the death of radio legend Rush Limbaugh. If only we could be so righteous. pic.twitter.com/0A1krgmU70

Remember, everyone who celebrates Rush's death hopes to celebrate yours.

And none of them will deny it.

Rush Limbaugh is survived by his wife Kathryn and brother David Limbaugh, an attorney and Christian author.