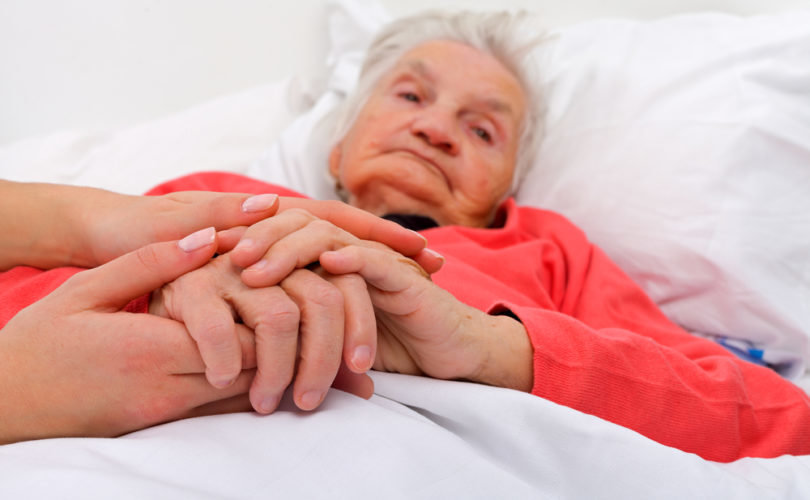 Elderly woman with her caregiverShutterstock.com

April 30, 2015 (LifeSiteNews.com) — An 80-year-old woman in the Netherlands was euthanized last week after her family obtained a court order obliging the care facility for the elderly where she was living to let her leave in order to fulfill her “death wish.” The woman was incapable of expressing her will. She was legally killed one day after having left the Clinic “Ter Reede” in Flushing. The management, medical staff, and the woman’s general practitioner were all opposed to the euthanasia.

The case marks a milestone in the slippery slope of legal euthanasia in the Netherlands. For the first time, a court has overridden a doctor’s decision not to euthanize a patient because of his or her mental incapacitation, ordering measures to be taken for euthanasia to take place anyway. The “End of Life Clinic” took over at the family’s request to perform the act – whether in her former home or in that of her relatives is not clear. It was also involved in the euthanasia request itself.

Little is known about the woman’s condition. She was not staying in a hospital, but in one of the establishments of “WVO” (Werkt voor Ouderen : “works for the elderly”). The Clinic “Ter Reede” caters for the demented, offering them individual studios, a supermarket, a library, a café, a hairdresser’s, and even a shop selling old-fashioned Dutch sweets, as well as catering, help with domestic chores and entertainment.

Some sources say the woman was very ill. But the nature of her illness has not been revealed: it seems safe to assume that she was at least suffering from some form of dementia. Campaigns led by the “Right to die” association in Holland, NVVE, encourage elderly people in the Netherlands to make their wishes known beforehand in the event of losing their mental capacity, especially in the case of their becoming demented. The fear of losing the ability to recognize family members or of being placed in a specialized center are among the reasons given by the elderly who leave advance directives in view of euthanasia.

Most doctors in the Netherlands refuse to act on advance directives when patients have lost their ability to express their own will.

In this woman’s case, an emergency proceeding was initiated by her family in Middelburg, near Vlissingen in the south-west, once the clinic “Ter Reede” had refused to let her be euthanized there or anywhere else. The clinic’s management and the association WVO argued that the woman’s personal doctor as well as the house psychologist had found her incapable of expressing her will, and asked for an independent enquiry to be made into the woman’s condition. The judge refused, and ordered the clinic to hand her over to her family.

The clinic appealed the decision. But on learning that the woman was to be killed within a very short time, “Ter Reede” and WVO initiated a second emergency procedure in Utrecht in order to issue a stay of execution of the first court order until the affair would come before the appeals court in May, arguing that an “emergency situation” had arisen.

Judge Sap in Utrecht decided against their request on April 21. The woman was removed from the clinic and her euthanasia took place the next day.

The judge told the clinic’s representative: “It’s not a question of incapacity. You do not want to accept the decision. You are putting yourselves in this situation on your own. I’m going out from the principle that you are going to respect this woman’s wishes. It’s the last thing you can do for her.”

In her case, two judges were prepared to follow the opinion of the End of Life Clinic, over and above that of her doctor and a number of other medical staff and helpers who saw her every day and were familiar with her daily life.

The End of Life Clinic, which specializes in counseling patients and “helping” them when their own doctors are unwilling to perform euthanasia for conscientious or other reasons, carried out its own enquiry into the victim’s condition. It commissioned a doctor to examine her, and then by a “SCEN” doctor (a member of an official network of counseling doctors who help family doctors form an opinion on euthanasia requests and give them advice on performing euthanasia), and finally by a psychiatrist. All three decided she was able to express her will, at least as far as euthanasia was concerned.

The Clinic “Ter Reede,” on the other hand, took her general cognitive abilities into account, relying on the findings of the woman’s personal doctor, the house psychologist, and all members of the establishment’s personnel. The judge in Utrecht was not satisfied, deciding they did not have the “specialized knowledge” that is necessary in order to assess euthanasia requests. The End of Life Clinic explained that one hour’s targeted conversation with a patient is more revealing than months or even years of a personal care relationship. Its director, Steven Pleiter, argues that you can enjoy having chocolate with whipped cream, singing in a choral group and even make jokes, and still have a death wish.

And so the End of Life Clinic won the day against professional caregivers who explained that they were acting on behalf of the woman because they wanted to protect a vulnerable old lady. It must be added that the Clinic Ter Reede is not opposed to euthanasia in principle or for conscientious reasons.

In this watershed case, the End of Life Clinic that openly campaigns for euthanasia and is more and more involved in performing the act was deemed more competent to assess a euthanasia request than personal caregivers.

Critics fear this case feels dangerously like a step towards the recognition of a sort of independent authority who would take life and death decisions for the mentally incapacitated.