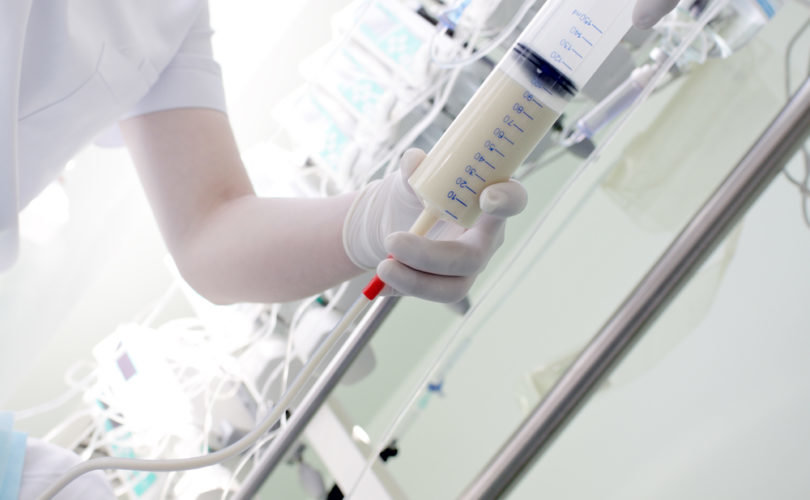 LONDON, June 8, 2020 (LifeSiteNews) — A U.K. High Court judge has ruled that food and water may be removed from a 34-year-old man in an artificial coma so that it leads to his eventual death, which, the judge ruled, is in the patient’s “best interest.”

The man, who needs a permanent stoma (surgical hole in stomach to collect digestive waste by means of a colostomy bag), had indicated earlier this year that he would not want to live with a condition that hindered his social or sex life.

A Christian group, however, is asking for an urgent review of the case, arguing that since the man accepted the life-saving operation, the doctors should not remove food and water so he dies.

The patient, who for now may only be referred to by the initials MSP, is currently being kept under sedation after urgently needing an operation to insert a stoma.

MSP had a history of chronic bowel issues and had surgery in October 2019 to form a temporary stoma, which was then reversed at his request on May 14. Within weeks, his condition worsened and on May 27 MSP agreed to surgery to form a stoma immediately after his surgeon informed him his life was at risk.

After his surgery, MSP has been kept sedated. Barnsley Hospital has sought a legal judgment on its proposed plan to continue sedation while withdrawing food and fluids.

“Dr W considers that if MSP’s wishes are to be given effect, there should be withdrawal of artificial nutrition and hydration with continued sedation which, ultimately, will compromise respiration and lead to MSP’s death,” Mr Justice Hayden noted before ruling that such a course was in the MSP’s “best interests.”

Hayden justified his decision by saying that an advance directive written by MSP in February 2020, as well as evidence given by his mother, made clear that he “would unhesitatingly reject the striking artificiality of parenteral feeding” and that in such an “exercise of his personal autonomy he is entitled to take that decision which this court is required to and does respect.”

Hayden noted in his judgment that MSP “utterly loathed life with a stoma” and, according to evidence from his mother, the young man had asked her: “How can I get a job? How can I get a woman?” MSP’s father told the court that he fears his son would commit suicide if allowed to regain consciousness.

But U.K. lobby group Chrisitan Concern is calling for a public inquiry into the case, arguing that the judgment “begs many questions.”

“We have a young man with a serious medical condition who appears to have changed his mind about not wanting to live with a stoma. However, Mr Justice Hayden seems to have disregarded this and decided what MSP wrote in February represented his 'true' wishes,” Andrea Williams, chief executive of Christian Concern, told The Daily Mail.

“This man's life hangs in the balance because of a judgment that begs many questions, and we are calling on the Justice Secretary (Robert Buckland) to set up an urgent public inquiry into the operation of this legal system,” Williams continued.

Dr. Anthony McCarthy of the U.K. pro-life group the Society for the Protection of Unborn Children (SPUC) told LifeSiteNews that the case “builds on, and goes beyond, all that is wrong with current law and medical guidance on the treatment of those currently unable to make decisions.”

“This patient is only unconscious because he is being deliberately kept so. The judgment lays huge stress on the patient's advance directive, while admitting it was not ‘procedurally compliant’ and noting that the patient consented subsequently to a stoma in apparent contradiction of that directive, though in the hope it would not be permanent,” McCarthy said.

“The judgment endorses a philosophical presumption that 'personal autonomy' must be honoured even when particular decisions are radically contrary to the goals of good medicine and justice. This feeds into the idea that self-assessments of life as 'not worth living' should be endorsed by doctors and judges who can act so as to eliminate such lives.”

McCarthy pointed out that it can take time to come to terms with a disability, but that research shows this happens frequently with appropriate support.

“Law and medicine become enemies of justice and health when they separate 'best interests' from the objective value of life, which is linked to the very human dignity which grounds respect for the patient him or herself,” McCarthy said.

In an article published in the National Review, American bioethicist Wesley Smith said the judge’s decision gave MSP “no chance of finding happiness” and that the case is a “half step toward allowing and normalizing lethal-injection euthanasia” in the U.K.

“Moreover, dehydrating this patient to death is a half step toward allowing and normalizing lethal-injection euthanasia. After all, it’s only logical. If he is going to be made dead anyway, why not simply administer a lethal jab instead of putting MSP, his parents, and the medical team through the grueling one or two weeks that his terminal sedation will take?”