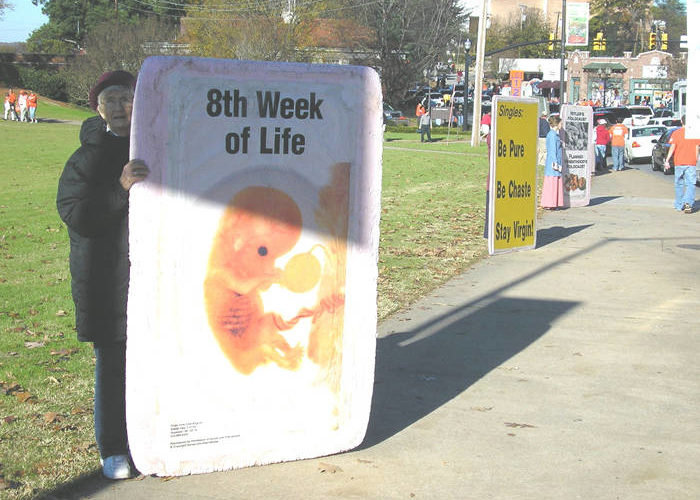 An activist from Columbia Christians for Life demonstrates at South Carolina's Clemson University.http://www.christianlifeandliberty.net

A South Carolina federal judge has awarded more than $197,000 in attorney’s fees and costs to the head of Columbia Christians for Life after a free speech court battle that involved years of legal wrangling at all judicial levels.

“It’s certain to send a message to law enforcement, that they shouldn’t trample the rights of pro-life protesters,” Stephen Fitschen, president of National Legal Foundation (NLF), which represented the pro-life group, told LifeSiteNews. “It’s going to impact pro-lifers across the country.”

Fitschen said the final victory of legal costs should provide pro-life supporters leverage when standing up for free speech while assembling for the pro-life cause, because the prospect of paying attorney’s fees often influences law enforcement officials to honor citizens’ rights.

“This should motivate law enforcement to protect the free speech, peaceable assembly, and free exercise rights of all citizens,” he said.

The case is also significant, Fitschen told LifeSiteNews, because it is the first where a pro-life advocate prevailed on each of those three counts, freedom of speech, peaceable assembly, and free exercise of religion.

The case began with a November 5, 2005 incident between Columbia Christians for Life (CCL) and the Green County, South Carolina Sherriff’s office.

The pro-life group had approximately 20 people conducting a pro-life demonstration at a busy intersection as part of a Show the Truth Tour, which includes large signs containing graphic images of aborted children. Police had received complaints and ordered the group to cease displaying the signs.

CCL Director Steve Lefemine sued in 2008 after police threatened him at a second protest. The U.S. District Court ruled in 2010 that Lefemine’s right to free speech, peaceable assembly, and free exercise of religion had been infringed, but refused to grant him attorney’s fees. The case went to the Fourth Circuit Court of Appeals which upheld that decision in 2012.

NLF filed a Writ of Certiorari later that year with the U.S. Supreme Court, which reversed the Fourth Circuit ruling in a unanimous decision, saying Lefemine was a “prevailing party.” This signified that attorney’s fees should be recoverable unless there are “special circumstances.”

Fitschen pointed out to LifeSiteNews that normally when the Supreme Court grants a petition, the parties file another round of briefs and orally argue the case. But in this instance the Court reversed the lower courts, ordering that they treat Lefemine as a “prevailing party.” Also significant, he said, was the fact that only one percent of petitions are granted. Of those, just eight percent are decided without briefs and oral argument.

That makes NLF’s victory for Lefemine statistically very rare, happening less than 1/10 of one percent of the time. But also considering the unanimous opinion after no judge at any level had agreed with the argument, and that no friend-of-the court briefs were filed in support of NLF’s position, the victory becomes even more remarkable.

Fitschen said a unanimous decision without briefing and argument, and without any support for the petitioner’s position, has only occurred five other times in the past twenty years, or roughly 3/1,000 of one percent of the cases.

Lefemine is excited for the win after all this time as well, he said.

“He’s on cloud nine,” Fitschen told LifeSiteNews. “He’s gotten a lot of feedback from all over the pro-life movement.”

Pro-lifers have shared with Lefemine that they carry a copy of the freedom speech, peaceable assembly, and exercise of religion decision with them when they demonstrate, Fitschen said, ready to employ it if necessary.

Fitschen told LifeSiteNews the other parties in the case have until December 31 to appeal the attorney’s fees decision, and that currently he had received no indication of their intent to do so.

The case specifics add up to a good body of case law, which should reverberate through legal channels across the country, he said.

“We are praising God for this incredible victory,” Fitschen said. “It was really a God thing that we won.”