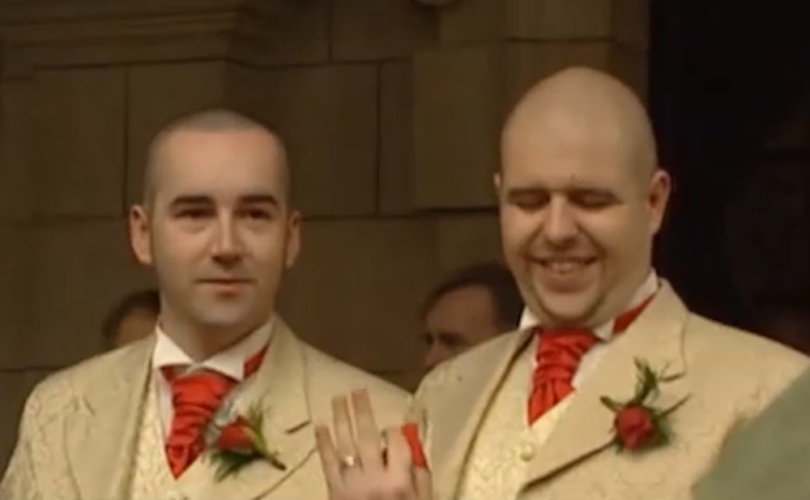 Chris and Henry Flanagan-Kane were the first gay couple to become civil partners.

The court dismissed two cases challenging the ban, delivering a setback to gay “marriage” advocates in the only part of the United Kingdom still upholding a ban.

Barring same-sex “marriage” in Northern Ireland does not contravene human rights, the judge ruled, “because that right does not exist.”

Justice O'Hara said the government should decide the issue and not the court, Reuters reported, and also that a gay “marriage” ban did not violate international human rights standards. The European Court of Human Rights had ruled that the right to gay “marriage” was not a right under the European Convention on Human Rights, he said.

“It is not difficult to understand how gay men and lesbians, who have suffered discrimination, rejection and exclusion, feel so strongly about the maintenance in Northern Ireland of the barrier to same-sex marriage,” said O’Hara. “However, the judgment which I have to reach is not based on social policy but on law.”

The ruling concerned two cases, the BBC reported. One is a joint case brought by the first lesbian couple and the first gay couple to enter civil partnerships in the UK, and the second case involves two people “married” in England who want their ”marriage” legally recognized in Northern Ireland.

O’Hara heard the two cases together because of the similarities in their arguments.

Same-sex “marriage” is banned in Northern Ireland but legal in England, Scotland, Wales, and the Republic of Ireland. Northern Ireland was the first country in the UK to introduce civil partnerships 12 years ago.

The same-sex “marriage” issue has been the center of battle in Northern Ireland for years, coming before its Assembly for numerous votes.

Pro-gay “marriage” forces have long pushed for legalization in Northern Ireland, and pro-life advocates say a 2015 referendum approving gay “marriage” in the Republic was the result of a years-long concerted campaign, coupled with secularization of the predominantly Catholic country.

Earlier this month in his first official visit to Northern Ireland, the Republic of Ireland’s first openly gay Prime Minister Leo Varadkar appeared at a Belfast gay rights event and said regarding legalization of same-sex marriage in Northern Ireland, “It is only a matter of time.”