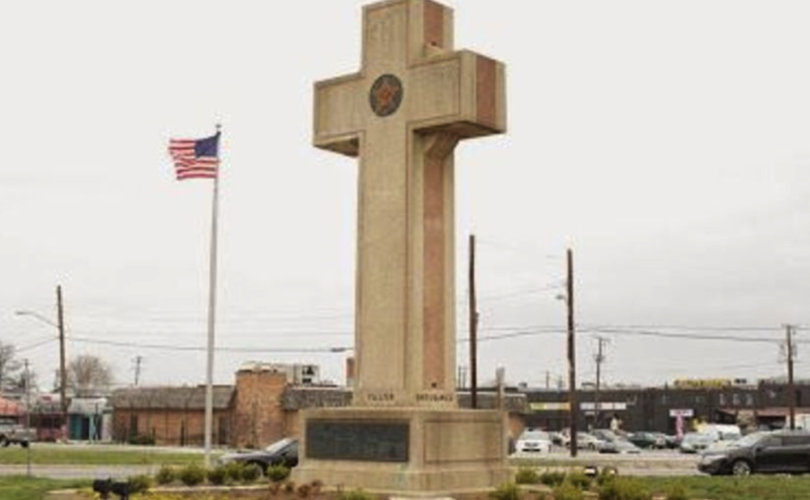 RICHMOND, Virginia, October 23, 2017 (LifeSiteNews) — A U.S. appeals court has ordered the removal of a 1925 memorial honoring the dead from World War I because it is in the shape of a cross.

The U.S. Fourth Circuit Court of Appeals decided last week that the veterans monument, after holding a place of honor in the community for more than 90 years, is unconstitutional.

Set on a major thoroughfare just outside Washington, D.C., the monument does not depict, quote, or even mention Jesus. “It is merely its shape that the Humanists find offensive,” the Baltimore Sun explained.

The court overruled a lower district court that explained the monument’s purpose is not primarily religious and so it is constitutional.

The historic 40-foot “Peace Cross,” erected by the American Legion on July 13, 1925 to honor Bladensburg’s 49 fallen WWI soldiers, stood for 92 years as a gathering place for community Memorial Day and Veterans Day commemorations.

The Fourth Circuit, represented by a three-judge panel, determined the memorial “excessively entangles the government in religion” and “breaches” the separation of church and state.

Chief Justice Gregory dissented. “This Memorial stands in witness to the VALOR, ENDURANCE, COURAGE, and DEVOTION (emphasis in the original) of the 49 residents of Prince George’s County, Maryland ‘who lost their lives in the Great War for the liberty of the world,’” he wrote separately. “I cannot agree that a monument so conceived and dedicated and that bears such witness violates the letter or spirit of the very Constitution these heroes died to defend.”

In 2014, the American Humanist Association (AHA) brought a lawsuit against the American Legion’s monument as violating the Establishment Clause. In late 2015, a Maryland District Court said the use of a cross as a military symbol of courage, sacrifice, and remembrance does not mean the state sponsors a particular religion. The AHA appealed, and now the Fourth Circuit has sided with the secularists.

“This memorial has stood in honor of local veterans for almost 100 years and is lawful under the First Amendment,” Jones Day attorney Michael Carvin argued. “To remove it would be a tremendous dishonor to the local men who gave their lives during The Great War.”

Jones Day and First Liberty are co-defending the American Legion and the park commission in the case.

The bottom of the non-denominational monument reads on its four sides, “Valor,” “Endurance,” “Courage,” and “Devotion.” In the middle of the cross is a gold star with “U.S.” in its center. The base includes a quote of WWI-era President Woodrow Wilson:

“The right is more precious than the peace; we shall fight for the things we have always carried nearest to our hearts; to such a task we dedicate ourselves.”

Cross monuments honoring WWI soldiers are commonplace all over the world. In fact, the defendants contend, criminalizing the use of a cross to honor the selfless sacrifice and courage of the nation’s military vets would make the government a hostile agent against religion, the free and public practice of which the Establishment Clause sought to defend.

The U.S. Constitution reads, “Congress shall make no law respecting an establishment of religion, or prohibiting the free exercise thereof.”

A bipartisan group of eight congressmen and women filed a friend-of-the-court brief supporting the veteran’s monument. “The Establishment Clause does not prohibit the use of symbols with religious meaning to commemorate our nation’s history and to reflect values shared by the American people,” the legislators reasoned.

John Daniel Davidson of The Federalist called the Fourth Circuit banning the structure “dangerous” and commented, “The iconoclasts have graduated from tearing down the Civil War monuments to World War I memorials.”

Shackelford indirectly referred to the growing fad of defacing, vandalizing, or suing for removal of historical monuments that are perceived by some as offensive. “In a time when America is divided over many issues, there is one thing (leaders of both parties) have agreed on: our veterans memorials should be protected,” she declared, noting that “90 percent of the American public” agrees. “We must always strive to honor the selfless sacrifice of our fallen heroes.”

An Iowa Vietnam War monument of a soldier bowing before a fallen compatriot’s grave cross — on public land with a private use contract — was removed after city council bowed to legal pressure. (Some council members were voted out in a subsequent election.)

A North Carolina veteran’s memorial of a soldier kneeling before a cross was not only removed but in fear of an expensive lawsuit the city banned private citizens from flying religious flags at the memorial.

“Americans shouldn’t be forced to censor religion’s role in history simply to appease someone who is offended by it or who has a political agenda to remove all traces of religion from the public square,” the Alliance Defending Freedom’s David Cortman said in reference to a Ten Commandments monument in New Mexico that the U.S. Supreme Court ordered removed.

The ADF’s New Mexico appeal asked the Supreme Court to decide if people can sue over a display just on the basis of personal offense. The appeal also asked the high court to determine how the Establishment Clause, which speaks to personal speech and activity, should be applied to monuments.

You may view the Fourth Circuit panel’s Bladensburg decision here.

Over the weekend, the government removed the webpage of the monument, which now immediately redirects the public to the town’s site.