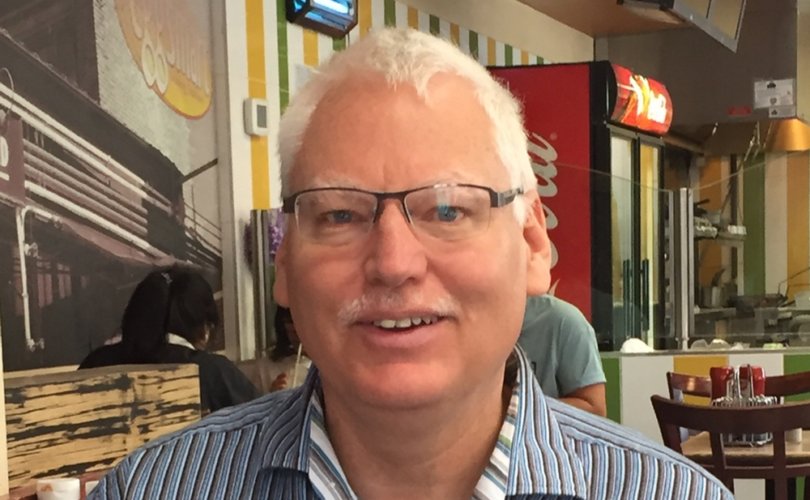 VANCOUVER, March 28, 2019 (LifeSiteNews) – A B.C. human rights tribunal has ruled that a Christian activist discriminated against a man who claims to be “female” by distributing flyers that referred to the man, who was running for political office at the time, as a “biological male.”

The court ruled for transgender activist “Morgane” Oger, born Ronan Oger, and against Christian activist Bill Whatcott by declaring it’s discriminatory not to accept transgender people as the gender they claim to be.

In a 104-page ruling released Wednesday (read full ruling below), the tribunal further declared there’s no room for any public debate in the matter, according to the Vancouver Star.

The tribunal also ordered Whatcott to pay Oger $35,000 in compensation for injury to his “dignity, feelings and self-respect,” and an additional $20,000 to Oger for Whatcott’s alleged improper conduct during and before the hearings, it reported.

Whatcott, 52, described the tribunal hearing as a “kangaroo show trial” and said he’s not surprised by the decision.

“Jesus Christ is still Lord and he will come again, I put my hope into that,” he told LifeSiteNews.

John Carpay, president of the Justice Center for Constitutional Freedom, which intervened in the case, decried the ruling as harming democracy.

“The Supreme Court of Canada has long held that freedom of expression is the lifeblood of democracy,” Carpay said in a press release.

“Society is full of people with diverse views and the Tribunal’s decision undermines the foundational principles of the free society and jeopardizes the health of Canada’s democracy,” he said.

Oger, who is vice president of the B.C. NDP, launched a discrimination complaint against Whatcott after the Christian activist distributed flyers in Vancouver-False Creek riding in 2017 when Oger was running as MLA for the B.C. NDP.

Whatcott’s flyer asserted Oger “is a biological male who has renamed himself ‘Morgane Oger’ after he embraced a transvestite lifestyle,” and can be found here.

The flyer also stated that “[t]hose who promote falsehoods like the NDP and BC’s major media . . . do so to their eternal peril.”

Oger, who narrowly lost to a former Vancouver mayor, alleged the flyer was discriminatory and exposed him to “hatred and contempt” under Section 7 of British Columbia’s Human Rights Code.

In a December 11 to 14 hearing, the JCCF and the Canadian Association for Free Expression intervened on Whatcott’s behalf, while West Coast LEAF and the B.C. Teachers’ Federation intervened for Oger.

Whatcott’s lawyer, Dr. Charles Lugosi, intended to give evidence that Oger was, in fact, a biological male as a defense.

Tribunal judge Devyn Cousineau, however, ruled “the ‘truth’ of the statements in the flyer is not a defense.”

“Therefore, to the extent that Mr. Whatcott intends to call witnesses to establish the truth of his impugned publications, that evidence is simply not relevant to the legal issue and will not be heard by this Tribunal,” she wrote.

Lugosi also argued Whatcott’s Charter rights of free speech and religion allowed him to express his views. A summary of Lugosi's legal defense of Whatcott can be found here.

The tribunal, which was composed of lawyers Cousineau, Diana Juricevic, and Norman Trerise, disagreed.

The ruling, penned by Cousineau, declared that even questioning transgenderism is discriminatory.

“[T]he proposition that we should continue to debate and deny the existence of trans people is at the root of the prejudice and stereotypes that continue to oppress them,” wrote Cousineau.

“It rests on the persistent belief, held by people like Mr. Whatcott, that a person’s genitals are the essential determinant of their sex and, therefore, gender. The result of this belief is to necessarily cast transgender people as either ‘deceivers or pretenders’,” she wrote.

“Throughout his testimony, Mr. Whatcott refused to recognize Ms. Oger as a woman, or to abide by the Tribunal’s frequent orders not to call her a man,” she wrote in a footnote.

“I will return to this in respect of Ms. Oger’s application for costs, but in the meantime, I have replaced his male pronouns with the correct, female, ones.”

“(It) is really so encouraging … to have the tribunal say you know you can’t argue that you are just commenting on a legitimate public issue because this is not a public issue. There is no debate about whether people are or should be transgender,” Oger’s lawyer, Susanna Allevato Quail, told the Star.

The December tribunal hearing sometimes appeared to be “rancorous,” according to an earlier LifeSiteNews report describing the conduct Cousineau ruled as improper.

“When my lawyer was cross-examining Mr. Oger about his subjective experiences, Oger’s lawyer repeatedly objected to my lawyer’s line of questioning and the Tribunal upheld all of her objections,” Whatcott reported then.

When Cousineau “berated” Lugosi for having “misgendered” Oger five times, Whatcott demanded that the tribunal stop bullying his lawyer and shouted, “The Emperor has no clothes; even Norman accidentally called Roman what he is: a guy.”

In response, Trerise allegedly told Whatcott to shut up, and Juricevic allegedly warned Whatcott that if he had an “outburst” like that again, he would be removed from his own hearing and ordered to pay costs.

Whatcott told LifeSiteNews he’s not sure if he will appeal the decision, nor does he have the money to pay the fine.

He is also facing a Criminal Code hate crime charge for infiltrating Toronto’s homosexual Pride parade in 2016 disguised as a “gay zombie” with five others, to distribute pamphlets warning of the spiritual and physical dangers of sodomy. Whatcott’s next scheduled court appearance on that charge is a judicial pretrial in Toronto on April 10.

However, Whatcott does hope to see Oger on Saturday in Kamloops where Oger is speaking on the “living the transgender lifestyle faithfully” at a Lutheran church.

“I’m going to be there,” he told LifeSiteNews. “I’ve got a thousand flyers to put out.”