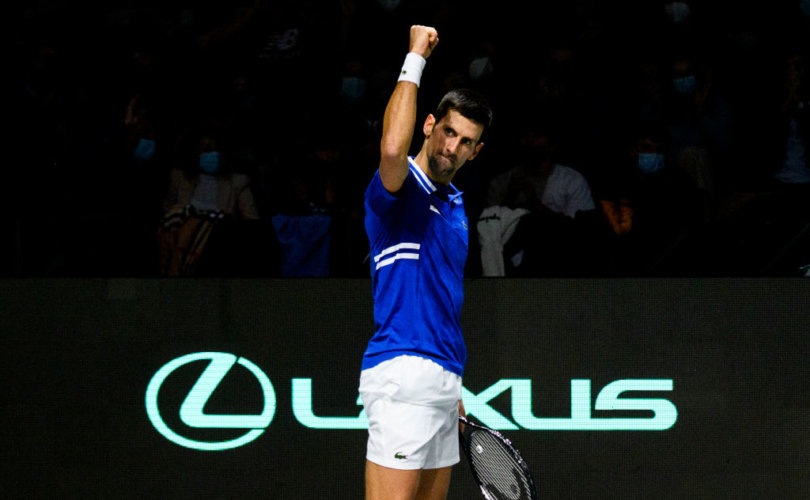 MELBOURNE (LifeSiteNews) – International tennis star, Novak Djokovic, has won a court challenge against the Australian government’s cancellation of his visa, following days of forced isolation after he was denied entry to the country due to not revealing his vaccination status, despite having a medical exemption from the shot.

Following an online hearing this morning, Judge Anthony Kelly in the Federal Court Circuit overruled a prior decision to cancel Djokovic’s visa, and the tennis star was ordered to be released from his mandatory detention “no later than 30 minutes” after the order was given.

Kelly declared that the “rules were not observed” when border officials decided to revoke Djokovic’s visa.

Kelly also ordered the government to pay the athlete’s legal costs and to return his personal belongings.

A transcript of Djokovic’s interrogation by Australia border guards has revealed that the tennis star has not received a COVID-19 vaccine, but that he has had the virus twice.

Djokovic has since released a statement, saying “I’m pleased and grateful that the Judge overturned my visa cancellation.” The world’s top ranked tennis player thanked his fans for their support and encouragement.

Will Djokovic’s visa be cancelled again?

Following Monday’s court ruling however, immigration minister Alex Hawke warned that he would consider exercising a “personal power” to have Djokovic removed from the country, cancelling the athlete’s visa and resulting in Djokovic being prevented from returning for three years.

The situation on the ground after the hearing remains unclear, with Djokovic’s father apparently telling media that his son has been “arrested,” and supporters who had gathered to celebrate the court victory are becoming uncertain as to the tennis star’s immediate future due to a “significant police presence” outside Djokovic’s lawyers’ office.

“Novak is in a political whirlwind, the people in Australia are unhappy since they have been locked down basically since the pandemic started,” said his brother, Djordje. “It’s definitely politics. What we can do is to let this be known all over social media – they want to capture and lock up Novak again.”

The Djokovic family are understood to be holding a press conference in Belgrade, at 6am EST.

Former Brexit party leader Nigel Farage, who has been a public supproter of Djokovic during the trial, celebrated Judge Kelly’s ruling, warning that any further retaliation from the government could backfire.

A huge win for @DjokerNole this morning. If the Australian government fight this they will look dreadful.

Meanwhile Australian Member of Parliament and leader of the United Australia Party, Craig Kelly, described the court ruling as a “brilliant legal win & the rule of law restored. MASSIVE loss for Minister Karen Andrews & Morrison. Karen Andrews must RESIGN. Morrison must APOLOGISE to Djokovic. Djokovic MUST be allowed to play.”

After landing in the country Wednesday, to defend his title at the Australian Open (beginning January 17), Djokovic was held by border guards who alleged a discrepancy in his visa application. The Serbian star had already been granted a medical exemption on December 30 to the COVID jab requirement allowing him to participate Open, after he received a positive COVID test on December 16.

The grounds for denying him entry are apparently due to a mistaken application for a visa which does not allow for medical exemptions.

The decision prompted international backlash, as Djokovic’s mother said her son was being held in an isolation hotel “like a prisoner” and that the hotel itself was “terrible. It’s just some small, immigration hotel, if it is a hotel at all. With bugs, it’s all dirty, the food is terrible.”

The tennis star’s brother further claimed that Djokovic’s possessions had been confiscated by Australian authorities, and that he was prohibited from communicating with his family during his interrogation.

Serbia’s president, Aleksandar Vučić, then intervened following a personal discussion with Djokovic. “In line with all norms of international law, Serbia will fight for Novak, truth and justice. Novak is strong, as we all know,” said Vučić.