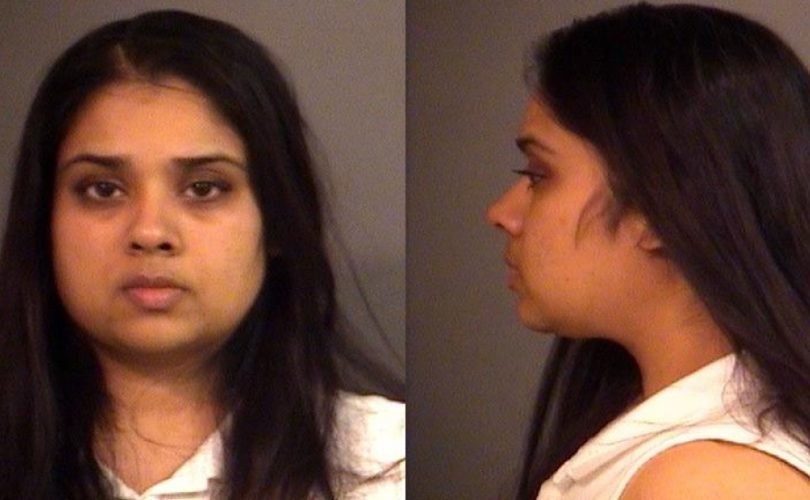 INDIANAPOLIS, Indiana, July 25, 2016 (LifeSiteNews) – An Indiana woman who left her infant in a dumpster after her failed attempt to self-abort will not be charged with murder after a Friday court ruling.

The Indiana Court of Appeals overturned feticide charges against Purvi Patel in a 3-0 decision that said the state’s feticide statute was not meant to apply to illegal abortions or to prosecute women for their own abortions.

And while the court agreed that Patel knowingly endangered her baby when leaving the child in the dumpster, it ruled the state failed to sufficiently prove her actions were what caused the baby’s death.

It vacated Patel’s class A felony neglect of a dependent charge and ordered the trial court to enter a charge of class D felony against her instead. The class A felony neglect charge initially carried a sentence of 20 to 50 years, and now with the lesser felony Patel faces between six months and three years.

Patel’s case ignited controversy among abortion advocates who claimed it could lead to criminalizing women for having an abortion.

But it also drew national attention because while Patel is the second Indiana woman to be charged under the state’s feticide law, her case is considered the first in the United States where a mother was charged for both causing her unborn child’s death and for neglect. Prosecutors said at the time they were bringing the conflicting charges to raise the chances of a conviction.

Patel went to the emergency room of St. Joseph Hospital in Mishawaka, Indiana, on July 13, 2013, with heavy vaginal bleeding and a protruding umbilical cord, initially denying she had been pregnant but later saying she’d delivered a stillborn child.

Further investigation showed Patel had taken illegal drugs from overseas to abort her baby and that she had delivered the child in her Granger, Indiana, home, then put the child in a plastic bag in a dumpster behind her family’s restaurant. Experts said the baby was at least 28-30 weeks old, had been born alive and breathing, and died from blood loss, asphyxiation, hypothermia, or lack of medical assistance.

Patel was charged four days later with class A felony neglect of a dependent, with the state alleging she had failed to provide any medical care to her baby immediately after its birth, which resulted in the child’s death. Then in August 2014, the state added the class B felony feticide charge, alleging that Patel knowingly terminated her pregnancy in violation of state law.

Indiana's fetal homicide law holds that “a person who knowingly or intentionally terminates a human pregnancy with an intention other than to produce a live birth or to remove a dead fetus commits feticide.” Indiana’s law mirrors that of other states’ fetal homicide laws in that it does not apply to a legal abortion. The state’s laws say as well that for an abortion to be legal it must be performed by a medical professional.

A jury found Patel guilty in February 2015, and the following month the trial court sentenced her to 30 years for neglect of a dependent, with 10 years suspended, and gave her a concurrent six-year term for the feticide charge. Patel appealed in December of last year, with arguments heard in May.

Abortion industry activists continued to use the charges against Patel after Friday’s appeals court ruling to advance their cause, with Planned Parenthood Action Fund trying to equate Patel’s actions with miscarriage on Twitter, and also to attack GOP presidential candidate Donald Trump on abortion.