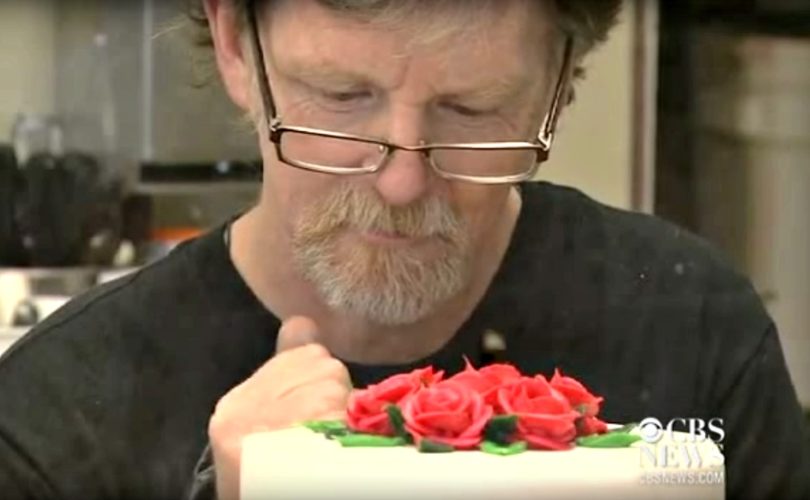 DENVER, August 13, 2015 (LifeSiteNews) – Christian business owners have no right to decline to participate in a same-sex “wedding”, no matter what their religion teaches, a court has ruled.

A three-judge panel of the Colorado Appeals Court ruled against Jack C. Phillips, the owner of Masterpiece Cakeshop in suburban Denver.

In July 2012, Phillips refused to sell a “wedding” cake to Charlie Craig and David Mullins, citing his religious beliefs and the fact that the state of Colorado did not recognize gay “weddings” as legal. He offered to sell them any other baked goods.

Instead, the homosexuals sued, saying that being denied a cake from the vendor of their choice was “offensive and dehumanizing.”

A lower court judge had ruled that Phillips violated the Colorado Anti-Discrimination Act (CADA), which bars discrimination based on sexual preference.

Since being ordered to use his artistic talents for same-sex “weddings”, Phillips has stopped making all wedding cakes, a decision that he says has cost him 40 percent of his business revenue.

He has also made it clear that he is willing to go to jail, or be forced to shut down his business, rather than go against his beliefs.

Now, the appeals court has ruled that forcing Phillips to provide a cake that he says celebrates homosexuality does not violate his First Amendment rights.

“By selling a wedding cake to a same-sex couple, Masterpiece does not necessarily lead an observer to conclude that the bakery supports its customer’s conduct. The public has no way of knowing the reasons supporting Masterpiece’s decision to serve or decline to serve a same-sex couple,” the opinion states.

The court's decision requires Phillips to retrain all his employees on impermissible discrimination and make quarterly reports showing compliance.

“I think that the ruling is wrong,” Phillips told the local CBS affiliate following the ruling. “The Constitution guarantees me the right to practice my faith, my religion, anywhere, anytime; there are no restrictions on it.”

“I don’t surrender those rights when I open my doors,” he said.

The ACLU, which filed the lawsuit against Phillips, celebrated the decision.

“Today is a proud day for equality and for upholding the law,” said Ria Mar, a staff attorney for the ACLU's LGBT project. She argued the case against Phillips. “When every lesbian or gay person…can walk into a store, a bank, a hospital, and know that they will get the same service as everyone else, we will have won. Until then, we continue to fight for the equal treatment we all deserve.”

“Today we can celebrate this big win,” she added of today's ruling.

“Government has a duty to protect people’s freedom to follow their beliefs personally and professionally rather than force them to adopt the government’s views,” Tedesco said. “Jack simply exercised the long-cherished American freedom to decline to use his artistic talents to promote a message with which he disagrees. The court is wrong to deny Jack his fundamental freedoms.”

He said the two are discussing further legal options.

Heritage Foundation expert Ryan T. Anderson said this case “highlights the need for public policy that would prevent the government from coercing anyone or penalizing anyone because they believe and act on the belief that marriage is the union of a man and a woman. The Supreme Court has said states must treat same-sex couples as married, but that does not mean states must coerce citizens, charities, schools or businesses into violating their beliefs. Freedom should be protected for all.”