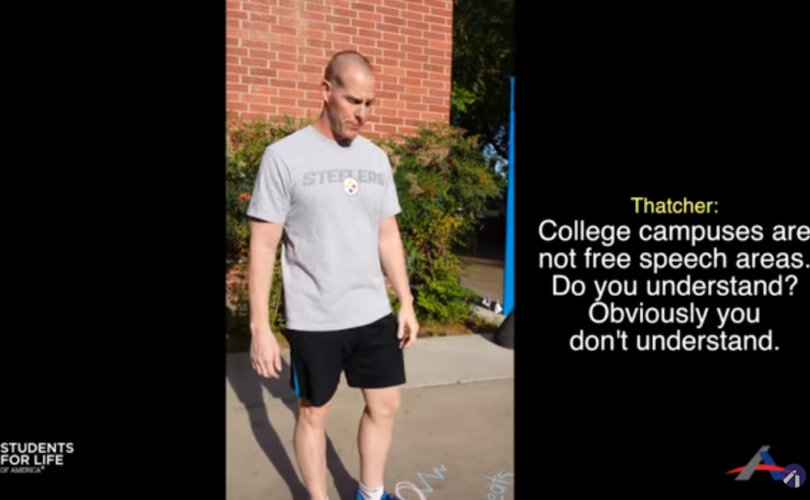 Gregory Thatcher, a professor of public health, violated the free speech rights of students belonging to the Fresno State Students of Life club when he erased their pro-life chalk messages and recruited his students to do the same. After hearing Fresno State Students for Life v. William Gregory Thatcher, a federal court issued an order that forbids Thatcher from interfering with the student group’s free expression.

The Fresno State Students for Life were represented by attorneys from Alliance Defending Freedom.

“No public university professor has the authority to silence any student speech he happens to find objectionable or to recruit other students to participate in his censorship,” said ADF legal counsel Travis Barham. “Like all government officials, professors have an obligation to respect the constitutionally protected free speech of students. Of all people, professors should be the first to encourage all students to participate in the marketplace of ideas rather than erase the speech of those with whom they differ. The professor’s actions here were wrong and flagrantly violated the First Amendment.”

In April, the Fresno State Students for Life received permission from their university to chalk positive, life-affirming messages on the sidewalks outside the campus library. The chalkings expressed support for pregnant and parenting students and described the development of unborn children. On May 2, after the students finished the project, Thatcher confronted them. He told them THAT they weren’t allowed to chalk the messages outside the library but had to confine them to a “free speech zone.” The free zone had, in fact, been eliminated almost two years earlier.

When club president Bernadette Tasy told the professor that the club had permission to chalk their communications outside the library, he said he would return to erase them. He then convinced at least seven students his 8 a.m. class to deface or remove the pro-life messages. When Thatcher himself returned, Tasy reminded him that she had permission for the project. Thatcher then deliberately began to rub out a message with his shoe, claiming he was exercising his own free speech rights: “You have permission to put (the chalk messages) down … I have permission to get rid of it.”

He also erroneously informed Tasy that “college campuses are not free speech areas.”

The Students for Life captured Thatcher’s violations of their freedom of speech and those of his recruited students on video.

According to the settlement, Thatcher will pay Tasy and another student, Jesus Herrara, $1,000 each as well as legal fees. The Alliance Defending Freedom will provide Thatcher with First Amendment training.

Students for Life of America president Kristan Hawkins welcomed the ruling and called the settlement “a victory for all students who have the same Constitutional rights as professors.”

“As our interactive map illustrates,” she wrote, “nationwide we are seeing incredible opposition to pro-life speech as our student leaders and volunteers speak for the defenseless, reach out to pregnant women, and educate on the violence of abortion. But as this case illustrates, we are not going to be silent, even if it takes going to court.”

Hawkins thanked the ADF and took the opportunity to plug the Students’ for Life Abortion=Violence campaign, which will take place on more than 90 campuses.

“Let this case put college administrations on notice that we expect students’ rights to be respected and that the free marketplace of ideas include college campuses,” she said.

When the lawsuit was first filed, Casey Mattox, director of the ADF Center for Academic Freedom, stated: “Today’s college students will be tomorrow’s legislators, judges, educators, and voters. That’s why it’s so important that university professors model the First Amendment values they are supposed to be teaching to students, and why it should disturb everyone that this Fresno State professor, like so many other university officials across the country, is communicating to a generation that the Constitution doesn’t matter.”

For his part, Thatcher has not expressed regret. According to The Fresno Bee, the professor said he “admitted absolutely no wrongdoing” and “did not have to pay a dime.”  Apparently the damages imposed by the court were covered by Thatcher’s insurance company through the National Education Association.

Nevertheless, Kristan Hawkins observed that Dr. Thatcher has a lot to be sorry for.

“He obviously has endured several months of litigation,” she told LifeSiteNews. “It’s sad that he says he hasn’t learned from his actions. But he’ll have to pay his premiums, and his insurance company will probably drop him.”