FT WORTH, TX, January 24, 2014 (Operation Rescue) - A hearing will be held today at 3:15 p.m. local time to decide the fate of Marlise Munoz and her pre-born baby, now 22 weeks gestation. Her husband, Erick Munoz, will ask the court to order John Peter Smith Hospital to terminate life support for his wife and baby.

JPS Hospital is complying with a state law that requires hospitals to maintain life support for pregnant women in order to give their children a chance at survival.

Pro-life leaders, including Pastor Stephen Broden of Fair Park Bible Fellowship and Founder of National Black Pro-Life Coalition, plan to attend today’s hearing in support of Marlise and her child. Marlise has been on life-support since she collapsed at home in November when she was 14 weeks pregnant.

The Munoz family says they were told Marlise is “brain dead,” although their baby continues to live and grow. However, the determination of “brain death” is a controversial one that is based on varying indicators, depending on who is making the diagnosis.

“The public has been given the erroneous impression that Marlise is a dead and decaying corpse. This assumption is completely false. Marlise’s heart continues to beat and she continues to nourish her pre-born baby. A rotting corpse cannot do that,” said Troy Newman, president of Operation Rescue. “As for the baby, we have information that diagnostic tests have not been done on the baby to support allegations that there are developmental anomalies, but even if the baby does have health issues, that baby still does not deserve to be killed.” 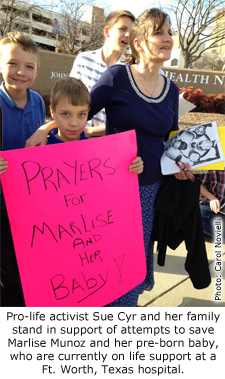 Even if the Munoz baby has suffered disabilities due to Marlise’s condition, numerous people have expressed an interest in adopting the Munoz baby even if he or she has special needs.

Abortion groups like NARAL have coldly sided with Marlise’s husband in calling on the hospital to kill Marlise and her baby.

“Some people want to decide who lives and who dies based on their personal criteria. If that was allowed, none of our lives would be safe. We simply cannot murder sick or inconvenient people just because we don’t want the hassle of caring for them. That is a dangerous road that will only end up unjustly depriving vast numbers of people of their right to life, just as we have seen with the issue of abortion,” said Newman.

The court hearing will be held today at the 96th District Court, 7th Floor, 401 W. Belknap in Ft. Worth at 3:15 p.m. It is open to the public. Pro-life supporters are encouraged to attend. A prayer vigil outside the court is also planned.

Also, a Prayer vigil in support of Marlise and her baby will be held outside JPS hospital on Sunday, January 26, at 3:00 pm.