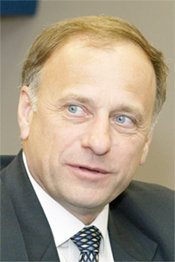 WASHINGTON, D.C., April 30, 2015 (LifeSiteNews.com) – Observers on both sides of the fight to protect marriage now await the Supreme Court's ruling about whether the Constitution confers a right to same-sex “marriage.” But some pro-family leaders in Congress have introduced a bill to get the judges out of the business of redefining marriage.

Congressman Steve King, R-IA, introduced the Restrain the Judges on Marriage Act of 2015, which would strip all federal courts of the right to change state laws on marriage.

“My bill would stop the court from destroying traditional marriage and preserve the votes of millions of voters in states that have passed bans on same sex marriage,” the Iowa Republican – who has a strong record as a pro-life conservative – added.

His bill would prohibit federal courts from ruling on the issue and states that “no federal funds” will be used to try, or enforce, such rulings.

Although seldom-invoked, Congress has the power under Article III of the U.S. Constitution to exempt certain issues from judicial review, even from the Supreme Court – and even after arguments have begun.

Congress passed just such a bill to prevent the U.S. Supreme Court from ruling on the case Ex Parte McCardle in 1869. Justices had heard the arguments but not yet made a decision when Congress overrode the veto of President Andrew Johnson. The High Court acknowledged Congressional authority had been withdrawn and did not issue an independent ruling.

“Without jurisdiction the court cannot proceed at all in any case. Jurisdiction is power to declare the law, and when it ceases to exist, the only function remaining to the Court is that of announcing the fact and dismissing the case,” the Court ruled. “The appeal of the petitioner in this case must be dismissed for want of jurisdiction.”

As the nation's courts have intervened on social issues in anti-democratic ways, the idea has cropped up time and again. The late Sen. Jesse Helms endorsed such a notion about school prayer in the 1980s.

Newt Gingrich, the former Speaker of the House, said on the campaign trail in 2011, “The Congress can pass a law and can limit the Court’s jurisdiction. It’s written directly in the Constitution.”

Same-sex “marriage” was imposed by court order in Massachusetts and Iowa, then by a host of federal judges in all but 11 of the states where the ancient institution has been redefined.

U.S. Supreme Court justices heard oral arguments on the subject in Obergefell v. Hodges on Tuesday. The same day, Congressman King led a pro-family rally on the Supreme Court's steps and, later that day, told Newsmax.com journalist Steve Malzberg that the “family unit is the essential building block of all society.”

“What's good for kids is to have a father role, a mother role and the two of them coming together making that sacrifice so that the children have the best opportunities to succeed,” he said. “That's why we [hold] marriage so strongly and we've done so throughout all of the millennia” – a word cited by Justice Anthony Kennedy during the arguments.

“As the GOP works to turn back the clock, Iowa Democrats will stay committed to progress and equality,” she told the Omaha World-Herald.

There is no indication that House leadership intends to bring his bill to the floor for a vote.