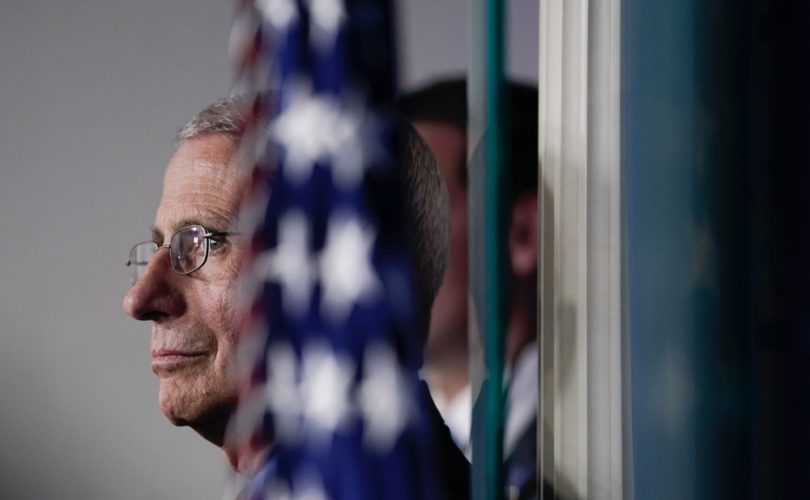 (LifeSiteNews) – Yet another individual has come forward to declare that COVID-19’s origins trace back to U.S. federal funding overseen by White House COVID adviser Dr. Anthony Fauci, a figure difficult for defenders of the medical establishment to dismiss: a former vice president for the medical non-government organization EcoHealth Alliance.

Just the News reported that Andrew Huff, an ex-EcoHealth VP who also served as an Army infantryman in Iraq and as a research fellow in the U.S. Department of Homeland Security, made the statement in a packet of information apparently given to Republican U.S. Sen. Ron Johnson of Wisconsin by attorney Thomas Renz, who represents Huff and others opposed to COVID-related mandates.

“The process of developing SARS-COV2 was also described in detail in the proposal submitted to, and ultimately funded by, the National Institutes of Health (HHS NIH), The National Institute of Allergy and Infectious Diseases (NIAID), by EcoHealth Alliance with the WIV and [University of North Carolina] listed as collaborators,” Huff says in a sworn declaration.

Below is link to the copy of the report about the REAL Origin of SARS-CoV2 sent to the US Senate and Congress last week.

My declaration in the document was provided under oath with penalty of perjury. https://t.co/P8KipAQ4mU pic.twitter.com/fI2gvW6xqB

Early in the pandemic, the theory that COVID originated in a Chinese lab rather than nature was bitterly condemned as harmful misinformation. But by mid-2021, as evidence mounted, mainstream voices began to acknowledge it as a possibility.

Last May, Republican members of the House Intelligence Committee released a report finding “significant circumstantial evidence” that COVID spread from a leak at China’s Wuhan Institute of Virology (WIV), and Republican U.S. Sen. Rand Paul of Kentucky has taken a leading role in investigating Fauci, the outgoing National Institute of Allergy & Infectious Diseases (NIAID) director, for his oversight in the U.S. government’s alleged role.

Under Fauci, NIAID approved funding for EcoHealth to explore gain-of-function (GOF) research, which entails intentionally strengthening viruses to better study their potential effects, on coronaviruses, at several sites, including WIV.

Fauci and his defenders insisted that the work NIAID approved was not gain-of-function research and could not have lead to COVID, but in January the conservative investigators of Project Veritas released documents they obtained showing that, before going to NIAID, EcoHealth previously pitched its funding request to the Defense Advanced Research Projects Agency’s (DARPA), which rejected it on the grounds that the project would violate a preexisting moratorium on GOF research and failed to account for its potential risks.

Among those documents was an August 2021 report to the Inspector General of the Department of Defense by U.S. Marine Corps Major Joseph Murphy, a former DARPA fellow, who stated that “SARS-CoV-2 matches the SARS vaccine variants the NIH-EcoHealth program was making in Wuhan.”

Since then, leaked emails have revealed that top researchers with NIAID, the National Institutes of Health (NIH), London’s Wellcome Trust, and the Netherlands’ Erasmus University Medical Center were aware of the lab-leak possibility as early as February 2020 but feared publicly acknowledging it would impair “science and international harmony.”

In May, NIH acting director Lawrence Tabak admitted to Congress that the agency restricted the availability of data on the early genomic sequences of COVID-19, information that could help settle the origins of the virus, at the request of scientists from Communist China.

“The whole thing is scientific arrogance,” says former Center for Disease Control & Prevention director Robert Redfield, another proponent of the lab-leak hypothesis. “There was an arrogance that they could contain this, that it wouldn’t escape it. I worked with the Chinese CDC for many years while in the military and while at the University of Maryland. And viruses get out of labs. That’s just the nature of the beast.”