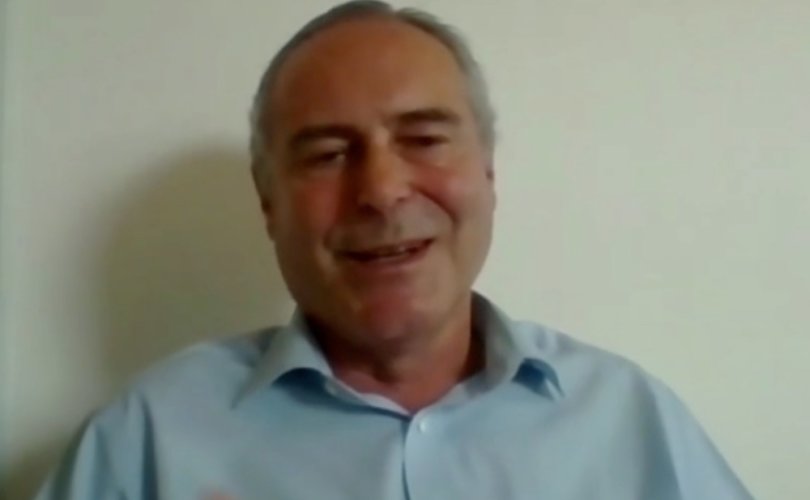 PARIS, France (LifeSiteNews) – A prominent French scientist with extensive expertise in infectious diseases has called the COVID-19 vaccines “dangerous” and stated that they “are not really vaccines.”

Perronne is one of France’s foremost expert on infectious diseases. Until recently, he was the head of the Medical Department for Infectious Diseases at Raymond Point Carré hospital in Garches, a post he held from early 1994. Raymond Point Carré hospital is the teaching hospital for the University of Versailles-St Quentin near Paris. Perronne is also a fellow at Institut Pasteur, a world-renowned biomedical research center.

The professor is by no means anti-vaccine; he has been involved in France’s vaccination policy for many years.  Perronne has served as chairman of such important French health committees as the National Consultation Group on Vaccination or Technical Committee on Vaccination (CTV) and HSCP the French High Council on Public Health, the Infectious and Tropical Diseases Teaching College (CMIT), the Infectious Diseases Federation (FFI, which he co-founded), and the National Medical and Healthcare products Safety Agency (ANSM). ANSM examines the health risks of medicines and is France’s only regulator of biomedical research. Perronne was also on the Scientific Council of the French Microbiology and Infectious Diseases Research Institute (IMMI/INSERM) until 2013.

On the international level, Perronne has served as Vice President of the European Advisory Group to the World Health Organization.

But in spite of his many years of service in the French healthcare sector and his infectious diseases expertise, Perronne was dismissed as head of the Medical Department for Infectious Diseases at Raymond Pointcarré hospital following a number of statements he made in defense of hydroxychloroquine and for criticizing the global response to the COVID-19 pandemic. His critique included the vaccination campaign.

Perronne has also been the victim of censure and censorship by the French media, who paint him as a conspiracy theorist. His reputation has been badly damaged by these attacks, and he has been ostracized and discredited by his former colleagues. The French medical elite are working hand in glove with pharmaceutical lobbies and have aligned themselves with the official policy of the French government on the management of the COVID-19 crisis.

The danger of the vaccines

Perronne began the interview by insisting that he is not against vaccines as such.

“I am not anti-vaccine because I wrote the vaccination policy for France for a great many years,” he told UK Column’s chief editor Brian Gerrish.

“The problem is that the products they call ‘vaccines’ for Covid-19 are not really vaccines.”

Perronne has studied in detail the various products now commonly referred to as “COVID vaccines;” he says they are better described as “genetic modifiers.” He explained that the process on which their supposed efficacy is based is dangerous, as it involves the uncontrolled production of proteins by the body.

“When you inject messenger RNA to produce a huge amount of a spike protein, a fragment of the SARS-CoV-2 virus, you can’t control the process,” he stated.

When asked why the vaccination campaign was permitted, the professor replied: “I think you should put this question to the politicians because in the history of infectious disease medicine, it has never happened that a state or politicians recommend systematic vaccinations for billions of people on the planet for a disease whose rate of mortality now is 0.05%.”

In December 2020, the French professor expressed in an open letter his concerns regarding COVID “vaccines,” warning of their potential danger. Some of his fears have now materialized, as he explained in the interview.

“… [We] now know (it’s officially published) that in the human genome, sequences of DNA corresponding to the RNA of the virus [have been found],” he said.

“That’s proof that what I said in an open letter in December, saying that it was dangerous to inject these products, has now been confirmed,”  he continued.

“And all the governments continue! To me, it’s a great mistake.”

The inefficacy of the lockdowns

Perronne also criticized a number of measures taken by governments in response to the pandemic, saying the lockdowns were “useless.”

“We now have the proof, by comparison between many countries in the world, that lockdown was completely useless,” he told Mike Robinson, the co-editor of UK Column.

“… [T]he countries with the strictest policies of restricting civil liberties and so on, like France (…), a champion of the suppression of liberties today, have the worst results in the world.”

The unreliability of PCR testing

The professor questioned the reliability of the data on the actual number of COVID cases. He claims PCR tests are not reliable as they tend to produce a great number of false positives.

“We cannot really rely on the statistics in many countries because with PCR tests, which amplify the RNA of the virus (…), we have many, many false positive results.” Perronne said.

The efficacy of treatments

A controversy surrounding his defense of various treatments against COVID-19, including ivermectin and hydroxychloroquine, precipitated Perronne’s fall from grace in late 2020. The professor suffered much censorship around this particular topic and was therefore delighted to take the opportunity to share his scientific opinion on the matter.

“We have treatments,” he assured his interviewers.

“There are hundreds of publications showing that early treatments work: there’s hydroxychloroquine, azithromycin, ivermectin, zinc, Vitamin D, and so on—it works! There are publications!”

In response to the argument that ivermectin could be dangerous, Perronne cited the many studies proving its efficacy  and the fact that millions of people worldwide took the medicine long before COVID vaccines were around. He stated:

“To think that ivermectin is toxic is completely stupid,” he stated.

“Hundreds of millions, maybe billions of people in the world have taken ivermectin for [parasitic] diseases, for [lymphatic] filariasis and so on. So, it’s a very well-known product,” he continued.

Perronne denounced the conflict of interest between pharmaceutical companies and the “experts” tasked with advising  governments on the right course of action.

“I’m deeply shocked at all these so-called ‘experts’ who are advisers to our authorities, who are on the TV every day,” he said.

“Most of them have huge conflicts of interest with pharmaceutical companies.”

The inefficacy of the COVID vaccines

Perronne then reiterated his criticism of the COVID-19 “vaccines,” pointing out that an efficient vaccine should provide full protection.

He explained: “If you are vaccinated with an efficient vaccine, you are protected. You should not have to wear a mask anymore; you should have a normal life.”

The professor then illustrated how the inefficacy of COVID-19 vaccines is being used as a political weapon by governments to spread fear, especially a fear of the unvaccinated, among the vaccinated population.

“In many countries, they say, ‘Oh, you’ve been vaccinated, but you’re not really protected,’” Perrone said.

“And now they say to the vaccinated—who are supposed to be protected, who should have confidence! — ‘Oh, the unvaccinated will contaminate you!’”

What should be done?

In the last minutes of the interview, Perronne was asked by his hosts what he would do if he were in charge of the management of the crisis. The professor made the five following suggestions:

1. Substitute the “vaccination” campaign with a treatment campaign

“First of all, I would stop the so-called ‘vaccination’ campaign,’ he said, adding that he would focus on treating patients who contract COVID-19 as early as possible.

“I would promote, among general practitioners, early treatment with ivermectin, zinc, Vitamin C and Doxycycline or azithromycin.”

Perronne then recommended isolating the sick instead of the healthy, saying that only those with symptoms should be strictly isolating with masks.

“I would encourage the strict isolation of symptomatic patients, because that’s the way to control the transmission” he said.

“Just two weeks of isolation is enough, during the contagious period of symptomatic people, but strictly isolated, with a mask if needed, and so on.”

He also stressed the important of early treatment to reduce transmission and deaths.

“Treat them very early,” he said, “and if you do that, [COVID] rapidly ends.”

The professor repeated his criticism of lockdown measures and mask mandates, insisting that these are not efficient.

“You don’t stop an epidemic with a lockdown, with masks in the street,” he said.

“That was shown in Denmark, with randomised studies with people wearing and not wearing masks. The mask is not efficient.”

Perronne denounced the quasi dictatorial turn the management of the pandemic has taken in many countries, including France, and advocated for the return of democracy and civil liberties.

“I would immediately re-establish all civil liberties “because now France is no longer a democracy,” he said.

“It’s like a dictatorship, with only five or six people around the table now able to bypass Parliament and say, ‘vaccination is mandatory’ and so on.”

Lastly, the professor challenged the policy of testing asymptomatic people and called for a stop to “PCR testing of the asymptomatic general population,” which he considers “completely anti-scientific.”

He explained that this is because this practice tends to generate a high number of false positive results rendering the data on new COVID cases highly unreliable.

“The people who developed the PCR test never, never did PCR tests of asymptomatic patients at large scale, because you get a huge rate of false positives,” he stated.

This last point wa also raised by cardiologist and COVID-19 expert Doctor Peter McCullough in an interview he gave to LifeSiteNews in July.

The full transcript of the July 2021 UK Column interview with Professor Christian Perronne and Dr. Anne-Marie Yim can be found in multiple languages here.