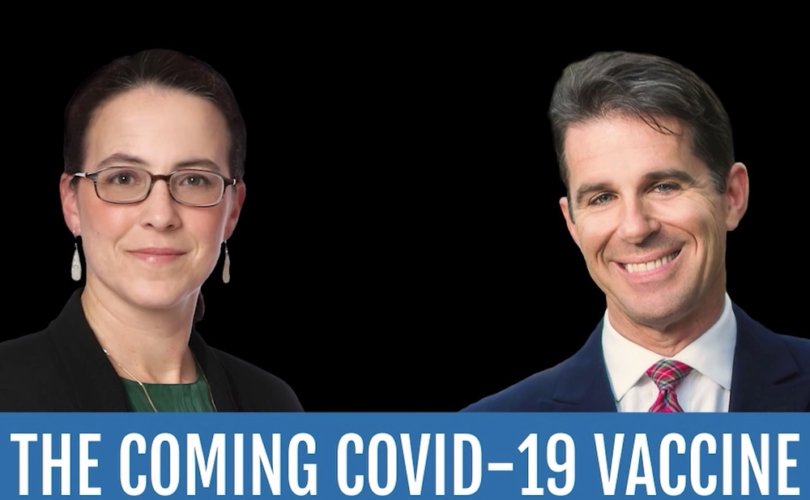 December 11, 2020 (LifeSiteNews) – A medical expert with over 30 years' experience in the field of commercial biotechnology has said that COVID-19 vaccines developed at “warp speed” are likely not safe and not necessary.

In an interview published on YouTube on Tuesday, Patrick Coffin, Catholic commentator and podcaster, spoke to Dr. Theresa Deisher about “the coming COVID-19 vaccine,” where she explained that “[t]his virus today has less than a 0.03% fatality rate and most of those people, I believe 92% or above, have other health problems.”

Dr. Theresa Deisher, who made the comments, is the founder and chief scientist of the Sound Choice Pharmaceutical Institute, a non-profit dedicated to “end human trafficking and exploitation for the purposes of biomedical research and commercial products.” Deisher herself has a Ph.D. in Molecular and Cellular Physiology from Stamford University.

During the hour-long interview many of the hot-button issues surrounding COVID-19, including the efficacy of masks, the speed at which a vaccination ought to be researched and produced, as well as the ethical issues, were raised.

Deisher questioned the lack of transparency shared by COVID-19 vaccine manufacturers at the various stages of production, raising concerns over the data and the reports of negative side effects in test groups. “Vaccine companies are not releasing the data to the public,” she said. “I think that the side effects in cherry-picked healthy individuals are very concerning and when you get out there into the wild, where people aren't cherry-picked, the side effects will just get worse. It's very concerning.”

As part of the concerns over transparency, many have remarked about the speedy timeframe within which new vaccinations have been produced. When asked about the typical length of time it takes to bring a vaccine from research and development through to rolling it out, Deisher replied “it would not be uncommon for it to be at least ten years.”

Commenting on the need for a vaccine, Deisher laid out that “this virus to date has less than a 0.03% fatality rate and most of those people, I believe it's 92% or above, have other health problems; we're making a vaccine at warp speed for a virus that doesn't look like it's going to need a vaccine.” She added that “[i]t is possible, but I don’t believe it is desirable, nor do I believe that it’s safe,” with as much as “15% of the very healthy young volunteers [experiencing] significant side effects.”

The plight of the vaccine-injured

— Article continues below Petition —
PETITION: No to government and corporate penalties for refusing COVID-19 vaccine
Show Petition Text
103145 have signed the petition.
Let's get to 125000!
Thank you for signing this petition!
Add your signature:
Show Petition Text

Deisher and Coffin went on to discuss the 1986 Child Injury Act, a little-known law which prevents the vaccine-injured or their relatives from suing vaccine companies.

Deisher noted that “our government sees vaccines as an issue of national security and they're concerned with [biological] warfare.” However, problems began with the diphtheria, tetanus, and pertussis vaccine, produced in the U.S. in the 1980’s. Deisher said the vaccine “was so harmful that companies were losing so much money in lawsuits […] that they were threatening to stop.” According to Deisher, “the government did not want vaccines to go away and they want these companies ready if we need a rapid vaccine in the case of [biological] warfare and that is why carte blanche immunity was granted.”

Instead a program for compensating victims of vaccine injury was created called The National Vaccine Injury Compensation Program (NVICP). According to Children’s Health Defense, the introduction of legal indemnity for vaccine manufacturers, and the subsequent compensation initiative, “failed miserably as a litigious, broken system where the injured are up against a government vaccine program, government owned vaccine patents, government health officials who administer the program and government paid attorneys from the Department of Justice.” The odds are stacked against claimants, for whom there is “no judge, no jury of your peers, and no discovery.”

Deisher agrees, stating that “it was not obviously the right decision and families [with] children have been harmed, grievously harmed.” She added that there is no other situation in which healthy people are coerced “because of our education policies” to take something which can damage them and leave them with “no recourse […] it's really an atrocity.”

Increased danger of vaccinating following lockdowns and widespread mask use

With the information that is now available to the government regarding the death rate associated with COVID-19, Deisher suggests that “public health officials [should] take an honest, objective look at data and change our policy.” She asserts that “we know a lot about this disease now and the hype and the passion over it is wildly out of proportion.” And yet the government continue to impose harsh restrictions that impact on “children, mental health, suicide, domestic abuse,” Deisher observed. She decried the government’s response to the data, saying: “now we know there's no justification for what we are doing and instead [the government] just do more: ‘oh that didn't work let's do more’. I mean, yeah, that's not rational.”

“All the control is no longer about COVID-19 anymore,” Coffin suggested. “Now it's about [the] oligarchic ability to inflame the masses with irrational fear. You know, a populace that's full of fear is very easy to manage.”

In response Deisher explained that “[if] you are in fear your cortisol levels go up and cortisol kills your immune cells, so fear is bad for a healthy immune system.”

“If you isolate, if you lock down and you're not exposed to bacteria or pathogens or viruses, your immune system takes a break, and if you wear a mask you also can hinder [the] functioning of your immune system,” she continued.

Exasperated at the effect mask wearing has on healthy people, Deisher observed that “we have people wearing masks, I mean I see them out by themselves, no one in sight, walking their dogs: they're terrified, they're wearing masks and they're locked down.” Rather grimly, she added that “when they come out, they're not going to have immune systems.”

When asked about the effectiveness of masks against catching the virus, Deishner said “no, masks do not work. 87% of new [COVID-19] cases in the U.S. almost always wear a mask, so it looks like the masks increase your risk of getting infected about 12-fold.”

On account of government mandates having suppressed people’s immune systems, Deisher stated: “[t]o think about mass vaccination of populations whose immune systems are not working well because of how this has been handled: I don't know what will happen, I think that's frightening.” She continued, saying “50% of our population is immunocompromised so I think it's going to be frightening to see what happens as they go vaccinate.”

In contradiction to locking down and masking up, experts have shown that getting fresh air and exercise contributes to building a strong immune system. Moreover, numerous studies show that, by supplementing your vitamin D intake and maintaining a balanced diet, one can reduce the severity of any symptoms, should they contract COVID.

Deisher said that she would not take either the Pfizer or Moderna vaccines, referencing that an mRNA vaccine has never been authorized before and that “the potential dangers and side effects from those vaccines are quite high and quite plausible.”

While Deisher said she would consider taking either the Sanofi or GSK vaccine, she also confirmed that in her opinion a rational person be on solid ground to eschew any COVID-19 vaccine.