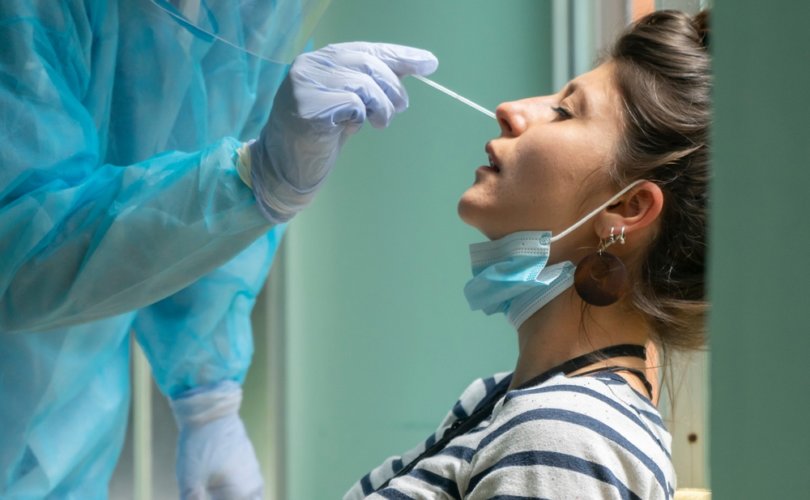 February 8, 2021 (LifeSiteNews) – Days after the World Health Organization changed the protocol for confirming a positive COVID-19 test, the number of positive cases across the world have dropped dramatically, leaving the mainstream media confused and leading people to suggest that the timing of the change in testing protocol was political.

On January 20, the day of Joe Biden’s inauguration and entrance into the White House, the World Health Organization (WHO) quietly issued new guidance on the manner in which polymerase chain reaction (PCR) tests were to be conducted and reported. It warned against reporting someone as having COVID-19, just because the test had been positive, when they did not actually present with any symptoms. The WHO also raised concerns about the “risk of false positive” tests.

In a surprising statement, the WHO described PCR tests merely as an “aid for diagnosis” without placing any greater weight upon the results of PCR tests, pointing the testers to examine real life evidence, such as symptoms.

“Most PCR assays are indicated as an aid for diagnosis, therefore, health care providers must consider any result in combination with timing of sampling, specimen type, assay specifics, clinical observations, patient history, confirmed status of any contacts, and epidemiological information,”the WHO stated.

Reporting on the news at the time, theU.K. based website Lockdown Sceptics, wrote that the news vindicated the warnings of likeminded “sceptics,” who had been “ridiculed for questioning the accuracy of the PCR test, referring to the risk of false positives when prevalence is low and urging the Government to carry out confirmatory second tests on those that test positive.”

The WHO’s new guidance conformed to the longstanding wishes ofthose critical of the excessive dependence on the results of PCR tests on forming government policy, as the directive stated that “a new specimen should be taken and retested” and further stipulates that “health care” workers should weigh up the test result alongside real-world information, such as symptoms or “clinical observations,” and contact with any other infected individuals.

At the time, a number of commentators pointed to the politicized timing of the WHO’s news, suggesting that it would be a help to Biden’s response to COVID-19, most likely reducing the number of cases reported, as he began his time in office.

It could also be seen as an act to mutually benefit both Biden and the WHO, since Biden came to the White House as an ally of the WHO, whilst Trump had began the process to withdraw from the WHO last summer after denouncing the organization as being “China centric.” The WHO Director General Tedros Adhanom Ghebreyesus also expressed his own delight at Biden’s recent inauguration.

Just a number of days after the WHO’s note, the media reported that COVID cases were dropping in what has been described as a “plunge,” leaving the “experts” confused as to the reason why. Reports have noted that cases, along with deaths and hospitalisations, have dropped “precipitously in the United States in the last several weeks.”

On January 14, The Covid Tracking Project (CTP) wrote that for the week just ended, “deaths are 25 percent higher than any other week since the pandemic began.” In the next weeks’report on January 21, the CTP wrote that weekly new cases were “down 20 percent,” with the same trend the next week with a “17 percent” drop in cases compared to the previous week.

The CTP report issued on February 4 had a marked difference in tone compared to its January 14 report, saying that “weekly new cases were down more than 16 percent over the previous week.”

John Hopkins University (JHU) reported 292,044 cases in the U.S.on January 8.But since then the number has been steadily dropping, with just over 88,000 cases reported February 7, markingthe first time that new reports of the infections fell below 100,000 in 2021.

Writing on February 3, the Daily Mail noted that cases were “plummeting,” and questioned why cases were “falling so fast.” The Mail presented a variety of quotes, attributing the drop in cases to a number of reasons, from the vaccine rollout, to a decrease in travel, more mask wearing, or a higher level of herd immunity.

Speaking to the Mail, Dr Ali Mokdad, a professor of Health Metrics Sciences at the University of Washington’s Institute for Health Metrics and Evaluation, suggested that the drop in cases was due to “a combination of vaccines, previous infections and the weather.”

Other reports state that experts are confused about the drop in cases, with some suggesting that it was linked to “growing fear of the virus after it reached record-high levels, as well as soaring hopes of getting vaccinated soon.” US News mentioned that “Health officials, data modeling experts and epidemiologists agreed it’s too early to see a bump from the vaccine rollout.”

The Centers for Disease Control and Prevention reports that 31 million people in the US have been vaccinated for COVID-19 at least once as of February 8, which,given an estimated current population of over 332 million, is a little over 10% of the entire population. Only 9 million people, or just over 2% of the population, have received two doses of the experimental vaccine. This prompted the Mail to report that “most officials say that, with fewer than two percent of the population fully immunized against the virus, it is too soon to say that vaccines are causing the decline.”

Biden’s Press Secretary, Jen Psaki, seems to have corroborated these doubts about the effectiveness of the vaccine on lowering infection rates, as only a few days ago she declared: “Even after you’re vaccinated, social distancing, wearing masks are going to be essential.”

The “plummeting” decline in cases comes, despite being in the periodof the yearwhen common influenza and respiratory viruses should be at their peak. Reports have noted how the peak month for the annual winter flu, between 1982-2018, was the month of February.

At the time of the WHO’s change for PCR tests, independent journalist Patrick Henningsen commented on the timing: “Proof of a ‘pandemic’ scam in 2020: the day #Biden is sworn in, WHO magically order #COVID testing laboratories to reduce their #PCR CT cycle threshold – which will automatically slash phony ‘cases’ & ‘deaths with COVID’. #BillGates-funded WHO fraud..”

News of the recent drop in cases has been met with sarcastic surprise by many on Twitter, with journalist and radio show host John Ziegler, summarizing many of the comments: “FYI, if they were really ‘experts,’ they would NOT be remotely baffled by this ‘phenomenon’….”

Many pointed back to the timing of the change in test protocols, accusing the WHO of changing the protocols to suit their own purposes.

Steven Mosher, China expert and founder of the Population Research Institute, mentioned: “Vaccines aren’t driving down the infection rate, politics is, at least in the U.S.”