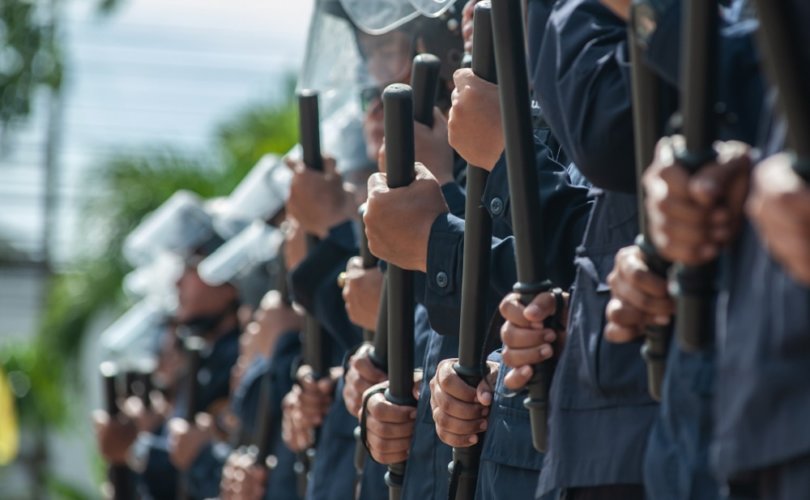 August 26, 2020 (LifeSiteNews) — Thirteen people were crushed to death or asphyxiated in a stampede in a Lima nightclub after police raided it Saturday night to enforce Peru’s coronavirus lockdowns.

National police and government officials said the deaths occurred when 120 people tried to escape the Thomas Restobar club in the Los Olivos district after police arrived to stop a clandestine party on its second floor, Reuters reported.

Some family members of victims alleged to a local radio station RPP that officers used tear gas at the scene. The Interior Ministry then released a statement that police had not used tear gas or firearms in the raid, reported Global News.

Government officials clarified Sunday that the victims were 12 women and one man between the ages of 20 and 30.

Another six people were injured, including three police officers, and 23 were arrested, as well as the married couple who own the club.

Neighbors reported the party to police. Peru closed nightclubs and bars in March and barred extended family gatherings on August 12 to restrict the spread of the coronavirus.

Also in March, the president of Peru’s congress passed the police protection act that “exempts officers and soldiers from criminal responsibility for any death or injury caused during the state of emergency,” according to an analysis by academics of democracies that are “leaning toward authoritarianism” during the coronavirus crisis.

In a public event Sunday, President Martin Vizcarra denounced the club’s owners and alleged that similar illegal events are common and pose a serious threat to public health.

“I have sorrow and I have sadness for the people and relatives of the people who have died, but I also have anger and indignation for those who were irresponsible by organizing this type of event,” he said. “Please reflect, let’s not lose more lives due to negligence.”

Lima’s public prosecutor’s office reported that 11 of the 13 individuals who died tested positive for the virus, and Vizcarra said 15 of the 23 arrested also tested positive.

To put such results in perspective, according to Dr. Dan Erickson at the July 27 White Coat Summit in Washington: “A case is a person, healthy, that tested positive. The vast majority. But the public hears cases and thinks, ‘Oh my goodness. These are sick people!’ No, the vast majority — 99.8 percent of people get through this with little to no progressive or significant disease.”

Meanwhile, anti-riot police stormed a Paris bar on Sunday and removed soccer fans during the televising of the Champion League final between Paris Saint-Germain and Bayern Munich because they were not wearing masks or keeping social distancing rules, reported Australia’s SkyNews.

Dramatic footage of the event shows police in full riot gear scuffling with fans and one officer appearing to beat patrons with his baton.

Paris is now considered a “coronavirus ‘red’ zone” and has adopted some of Europe’s “strictest Covid-19 measures” — including mandatory masks in many public spaces — following a recent “spike in cases of the respiratory disease across France” that also prompted Britain to put the country on its quarantine list, the U.K.’s Daily Mail reported.

In the lead-up to the historic match, government authorities urged people to wear masks, and on the day, 3,000 police were deployed on the Champs-Elysées to prevent crowds gathering there or at the club’s Parc des Princes stadium in the city’s west end.

Despite this, an estimated 5,000 fans were “pictured gathered outside” at Parc des Princes “with flares set off, flags on display and loud drums being played by the French champion’s ultras,” the Daily Mail reported.

Police used tear gas to disband the crowds, who were “frustrated” they couldn’t see the match, which was played in Lisbon behind closed doors, “on two giant screens,” SkyNews reported.

Things deteriorated even more after the French team lost 1-0, thus ending its run to win the European Cup for the first time.

Riots erupted as police clashed with thousands of disappointed fans.

“Trouble started before the final whistle,” a fan at the Parc des Princes said, as quoted in the Daily Mail. “Riot police were out in force, and they came under attack when PSG went one-nil down.”

As police fired tear gas and used baton charges, the crowds retaliated with flares and fireworks. “Videos posted on Twitter showed the concourse around the Parc looking and sounding like a war zone,” the Daily Mail reported.

During the mayhem, 15 vehicles and 12 shops were damaged, and 16 officers injured, according to interior minister Gerald Darmanin, and police made 148 arrests for damage, violence or “throwing projectiles,” according to the Daily Mail.

Police also cautioned about 400 people for not wearing masks but did not arrest anyone on that basis, it reported.