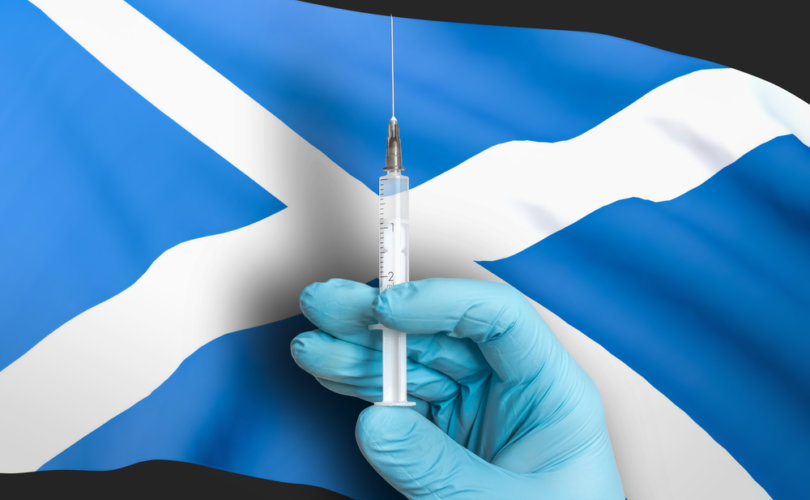 (LifeSiteNews) – The majority of people who have died with COVID-19 in Scotland in the last two months have been fully or partially vaccinated, according the Public Health Scotland (PHS).

PHS published a report on September 29 that presents a wealth of COVID statistics organized into a series of tables, figures, and charts that display the number of individuals who have tested positive, been vaccinated (partially or fully), and died after testing positive for COVID from a PCR test.

Scottish COVID stats have been circulating recently, with some suggesting in social media posts that deaths among the vaccinated exceeded those who were not. The actual numbers from the PHS report and other government websites prove that to be the case.

“From the 29 December 2020 (21 days after the start of the vaccination programme in Scotland to account for protection to develop after the first dose) to the 17 September 2021, there have been 4,148 confirmed COVID-19 related deaths with a positive PCR result and where COVID-19 was recorded as a primary or secondary cause on the death certificate,” the report stated.

However, PHS has attempted damage control, saying “81.1%” of deaths in Scotland from December 2020 to September 2021 were among the “unvaccinated.”

Reuters released an article on September 24, five days before the PHS report was published, that attempted to contextualize the data to make it seem like those who had been vaccinated were at less risk, even though more of them had died.

PHS told Reuters that the data show that vaccinated individuals are less likely to die from COVID-19-associated illness than the unvaccinated. The PHS reasoning is that since more people in Scotland are vaccinated, there are more over all people in the “vaccinated” category, which would mean more overall deaths.

“A higher overall number of COVID-19 related deaths among people who are vaccinated compared to those who are unvaccinated can be seen in current weekly reporting due to the fact that over 90% of individuals in Scotland are fully vaccinated against COVID-19,” a PHS spokesperson wrote to Reuters.

According to Scottish public health tracking, deaths associated with COVID in the nation took a nose-dive in early March 2021, after the winter peak of yearly cold and flu trends. At that point, less than 2% percent of the residents of the UK were fully vaccinated.

Since March, few people have died with COVID, with zero deaths recorded in numerous days throughout the country. Deaths only began to rise again in a statistically significant way in September when more than 60% of UK residents were double vaccinated.

In 2020, a similar trend took place, with the bulk of deaths in Scotland occurring in late winter/early spring, with a steep dive in the warmer months.

In addition, during September, 1,424 vaccinated people were admitted for acute care in Scotland and have tested positive for COVID, whereas only 186 unvaccinated people were admitted. It is noteworthy that PHS includes any individual who “had a COVID-19 positive PCR test 14 days prior, on admission or during their stay in hospital.” PHS does not say whether the people that are included in the numbers were seriously sick with COVID, and since it includes those that tested positive “during” their stay, it is likely that many were included who were in the hospital for other reasons.

Given that data from PHS shows that Scottish deaths associated with COVID peaked and fell when no vaccines were available, and when less than 2 % of the population was vaccinated, there is no data that prove vaccines lowered deaths any differently than what happened with the natural progression of the virus. In addition, since there was a rise in daily deaths in September 2021, when the majority of the population was vaccinated, there is reason to believe that the jabs are not as protective as they were said to have been.

Information from Israel suggests this to be true. A recent study published by the European Journal of Epidemiology showed that “the effectiveness of 2 doses of the BNT162b2 (Pfizer-BioNTech) vaccine against preventing COVID-19 infection was reported to be 39%, substantially lower than the trial efficacy of 96%.”

As cold and flu season approaches, all eyes will be on Scotland to see if the vaccinated will continue to die in higher numbers than the unvaccinated.