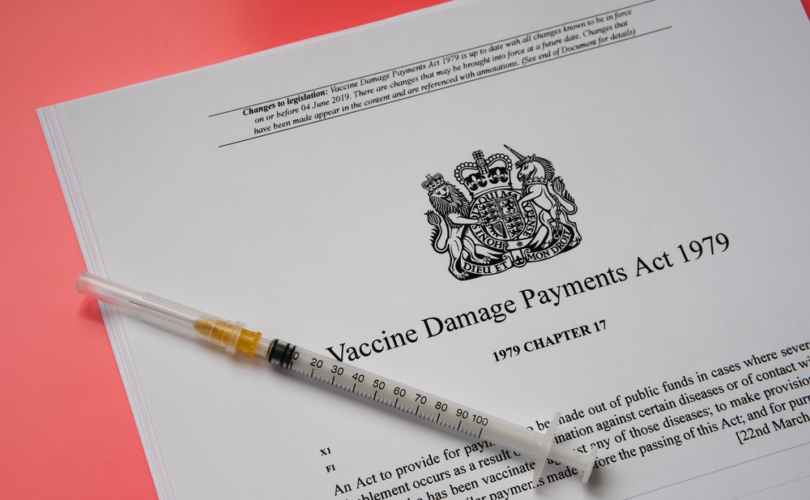 The Vaccine Damage Payment Scheme (VDPS) is a program in the UK that was initiated in 1979 for those who had been injured or killed by a vaccine, or for family members of those who have lost a loved one for the same reason.

The Times reported that 920 claims of COVID jab injuries are currently pending, which would amount £110 million — £35 million more than the 40-year total in just over one year since the COVID jab rolled out.

To qualify, claimants must have been left at least 60 percent disabled from the jab, or it must be ascertained that they died therefrom.

The UK still offers the AstraZeneca jab, which was pulled from the rotation in Canadian provinces and other jurisdictions after significant blood-clotting episodes were reported.

So far, none of the 920 compensation applications linked to the COVID shot have been paid out. The assessment can take months, with some victims waiting for their cases to be assessed since last summer.

According to data from the United States, the experimental COVID jabs have been significantly more dangerous than previous vaccines. By November 2021, over 850,000 injuries from coronavirus shots were reported to the U.S. government’s Vaccine Adverse Event Reporting System (VAERS).

These numbers may be conservative, however. It remains a concern that these figures are just “the tip of the iceberg.” A 2010 Harvard-executed study commissioned by the Department of Health and Human Services (HHS) revealed that reported vaccine injuries to VAERS represent an estimated 1% of actual injuries.

German insurance data has revealed that COVID jab injuries are 10 times higher than what was reported by the government. According to a representative from German health insurer BKK ProVita, around 4 percent to 5 percent of vaccinated individuals of their almost 11 million insured clients received medical care for COVID jab complications.