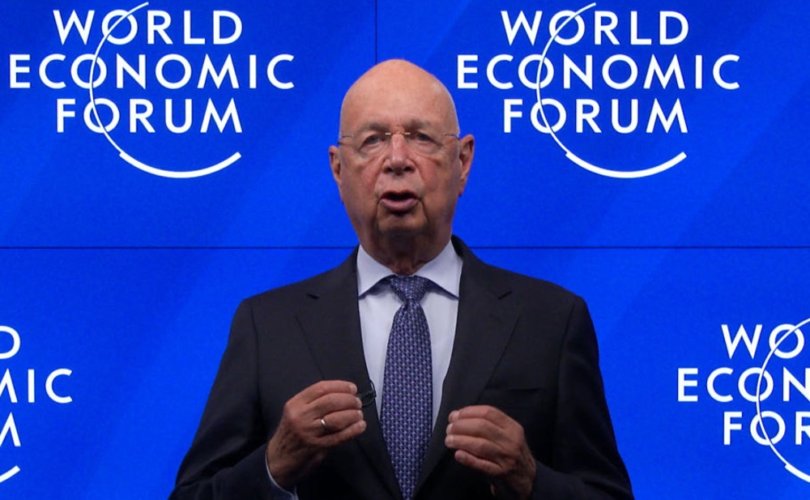 Headed by German engineer, economist, and “COVID-19: The Great Reset” author Klaus Schwab, the WEF made the connection in a September 14 report associated with its ongoing 2022 Sustainable Development Impact Meetings.

The WEF report suggested moves to track and restrict personal carbon usage has had “limited success due to a lack of social acceptance, political resistance, and a lack of awareness and fair mechanism for tracking ‘My Carbon’ emissions.”

However, the document noted that the unprecedented response to COVID-19 has created an environment in which that “lack of social acceptance and political resistance” may be overcome.

“A huge number of unimaginable restrictions for public health were adopted by billions of citizens across the world,” the report read. “There were numerous examples globally of maintaining social distancing, wearing masks, mass vaccinations and acceptance of contact-tracing applications for public health, which demonstrated the core of individual social responsibility.”

According to the report, that compliance “could help realise ‘My Carbon’ initiatives for shaping the future towards smart and sustainable cities.”

READ: COVID was just the beginning: Climate lockdowns are the next stage of the Great Reset agenda

The authors of the paper pointed out that the ascendency of Artificial Intelligence (AI) and “Smart” technology emerging from the so-called Fourth Industrial Revolution have provided platforms whereby personal consumption of energy can be monitored and limited.

The document cited “major advances in smart home technologies, transport choices with carbon implications,” and “the roll-out of smart meters” that the WEF said helps people choose “to reduce their energy-related emissions.”

The WEF also touted “the development of new personalized apps to account for personal emissions, and better personal choices for food and consumption-related emissions.”

While the language used in the WEF’s report suggests that individuals will be able to voluntarily opt into programs limiting their alleged carbon emissions, the notion has generated concern that consumers might not always have the choice.

Earlier this month, roughly 22,000 Colorado residents were prevented from adjusting their thermostats after their opt-in “smart” thermostat company locked the devices at 78 degrees F° during a heat wave, citing a local “energy emergency.”

While the “smart” thermostat company, Xcel, emphasized to the media that the program was voluntary and incentive-based, residents said they were surprised and upset to find they couldn’t control their home temperature.

“To me, an emergency means there is, you know, life, limb, or, you know, some other danger out there — some, you know, massive wildfires,” a customer told ABC 7 Denver. “Even if it’s a once-in-a-blue-moon situation, it just doesn’t sit right with us to not be able to control our own thermostat in our house.”

22,000 people in Colorado had their thermostats locked by their utility company in 90 degree weather due to an ‘energy emergency.’

People will read stories like this, still want a refrigerator that connects to the internet, and somehow believe our grid is ready for 100% EVs.

This week, The Great Reset: Global Elites and the Permanent Lockdown author Marc Morano told LifeSite’s John-Henry Westen that lockdowns, restrictions, and even planned economic collapse are all part of the “climate” agenda.

“The COVID lockdowns were literally a version of what they’ve called for for decades in the climate movement,” Morano said. “I attend every United Nations climate summit, and I’m going to the one in Egypt this year … and what these summits call for … is the ‘degrowth movement,’ or ‘planned recessions’ … to fight global warming. And what that means is the government imposes slower economic growth or forces a recession to lower emissions.”

Over the summer, the WEF argued that pushing forward an “clean energy transition,” partly by hiking up already record-breaking gas prices, would be necessary for both saving democracy and staving off environmental catastrophe.