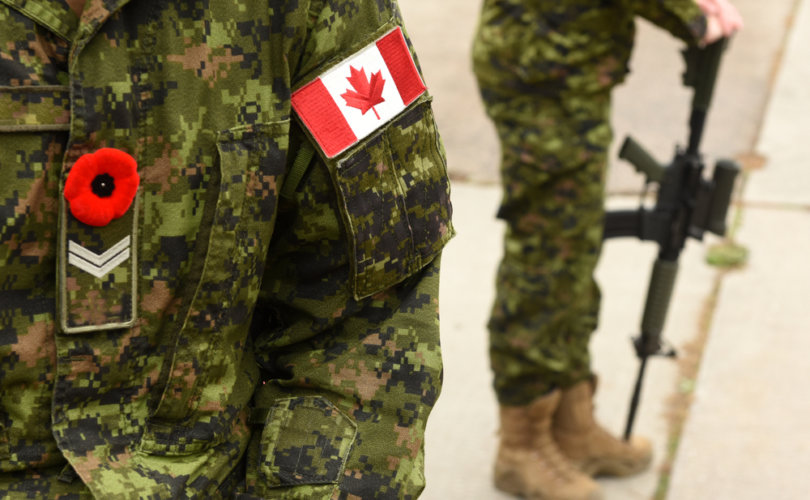 PETAWAWA, Ontario (LifeSiteNews) — Canadian Forces Base (CFB) Petawawa has been hit with a COVID outbreak resulting in hundreds of fully vaccinated Canadian soldiers being forced into quarantine.

According to a CTV News report, soldiers based on CFB Petawawa located in Ontario all got infected after participating in a training course that took place between November 13 and 14. Everyone who participated in the course had been fully jabbed.

Col. Eric Landry, Commander of 2 Canadian Mechanized Brigade Group, said that at first “a positive case was identified” and placed in quarantine, according to CTV News.

“Everybody who was in close contact with that person was asked to quarantine,” said Landry.

The training course involved 373 fully jabbed soldiers who Landry said had to work in close contact with one another. An additional one hundred people were working on the course from a distance.

According to Landry, around 92 percent of people in 2 Canadian Mechanized Brigade Group at Garrison have had the full COVID jabs.

Health officials from the Renfrew County and District Health Unit are currently monitoring 10 high-risk contacts in the local community, as well as three soldiers who are starting to show symptoms of the virus.

Those in the CAF who refuse the jabs could face potential “career ramifications.”

A group called Mounties for Freedom made up of active and retired members of the Royal Canadian Mounted Police (RCMP) and Canadian Military recently joined together to say they cannot “willingly participate in enforcing” COVID jab mandates.

The fully jabbed National Hockey League’s Ottawa Senators recently had to cancel games due to a team-wide COVID outbreak which affected 40 percent of the team, or 10 players and one coach.

What the mainstream media and governments worldwide refer to as “breakthrough” infections have gone up despite the booster jabs.

Although the Canadian government praises the effectiveness of the COVID jabs, trials have never produced evidence that vaccines stop infection or transmission. In fact, they do not even claim to reduce hospitalization, but the measurement of success is in preventing severe symptoms of COVID-19.

A study in the journal Science this November indicated that the reported efficacy of three COVID jabs approved for use in Canada, Pfizer, Moderna, and Janssen has waned significantly since earlier in the year, going from 86 percent to 43 percent.