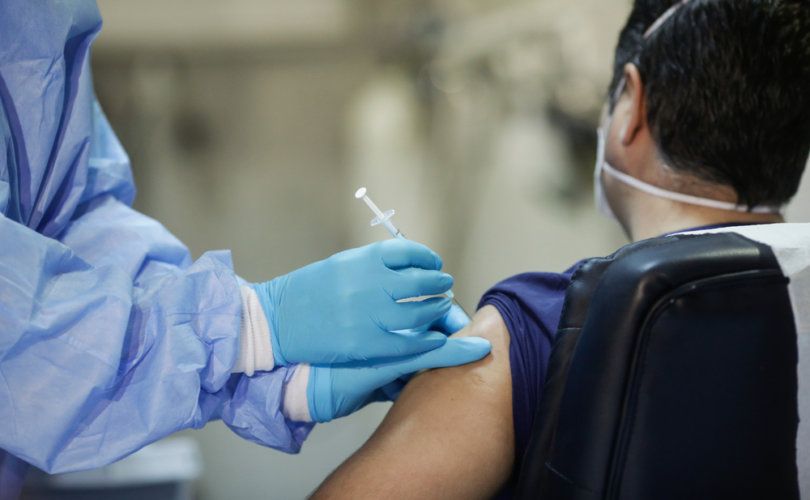 A Pfizer BioNTech shot is administered in a Romanian hospital.Shutterstock

(LifeSiteNews) – More than 2 million adverse events and 21,000 deaths have been reported to a European Union (EU) drug reaction database following the use of currently available COVID jabs.

The EU, comprising around 450 million people – roughly 60 percent of Europe’s estimated 750 million inhabitants – has reported administering 522.4 million doses of the jabs, corresponding to 75.1 percent of the EU’s citizens receiving at least one dose of either Pfizer, Moderna, Johnson & Johnson, or AstraZeneca’s experimental COVID shots.

The EnduraVigilance system is the EU-wide database for recording vaccine injury reports, as well as other medicine-induced injuries, corresponding to the U.S. Vaccine Adverse Events Reporting System (VAERS), jointly run by both the Food and Drug Administration and the Centers for Disease Control and Prevention.

According to a report in Health Impact News, a service that has provided tabulated versions of data from EnduraVigilance, between rolling out the COVID shots last year through to August 14, 2021, the system has collated 2,074,410 reports of injuries related to the jabs, including 21,766 fatalities across the 27 member states.

The source related that just under half of all reports (1,021,867) were of serious injuries, classified by the EU agency as corresponding to “a medical occurrence that results in death, is life-threatening, requires inpatient hospitalisation, results in another medically important condition, or prolongation of existing hospitalisation, results in persistent or significant disability or incapacity, or is a congenital anomaly/birth defect.”

The highest rate of problematic developments among the four emergency-authorized jabs occurred following the AstraZeneca shot, designed and manufactured in conjunction with Oxford University, which is reportedly linked to 947,675 injuries within the EU.

There were 4,740 reports of deaths, a large proportion of which followed the development of nervous system and vascular disorders. A total of 12,080 reports were listed as “[r]eproductive system and breast disorders.”

Overall, the recently FDA-approved Pfizer jab, now marketed under the name Comirnaty, was correlated with 833,498 injuries and 10,616 deaths. The system showed that Pfizer’s jab preceded 22,844 blood disorders, 148,477 nervous system disorders, and 910 adverse events related to “pregnancy, puerperium and perinatal conditions,” resulting in 29 deaths. It is unknown if the pregnancy-related deaths were miscarriages. An additional 10,909 reports were for reproductive system disorders.

Moderna’s jab, granted “conditional marketing authorization” for use within the EU on January 6, has been flagged for 229,430 injuries and 5,600 deaths on the drug reaction database. Johnson & Johnson, marketed in Europe under the name Janssen, has had 63,807 injuries reported against its jab, with 810 deaths occurring after using the single-dose shot.

The Yellow Card system used in the U.K. (which is now independent of the EU), the British equivalent of EnduraVigilance and VAERS, shows similar findings, with an overall vaccine injury tally of 1,165,636 after the three emergency authorized jabs between December 8, 2020, and August 18, 2021.

The vaccine rollout in the U.K. has reached some 70 percent of the population with at least the first dose. Just over 60 percent are considered “fully vaccinated” against the virus in the nation, given that they have received two doses of the shots.

Again, AstraZeneca’s formula was reported most frequently to the Yellow Card reporting system, drawing 816,393 adverse event injury reports, accounting for 70 percent of all U.K. injury reports. There were 1,056 deaths also recorded, six of which were miscarriages, and 810 reports of anaphylaxis, a dangerous allergic reaction, were made.

A total of 16,689 reproductive and fertility disorders were reported for the AstraZeneca jab, as well as 390 cases of Bell’s palsy, a muscular paralysis occurring in the face.

Despite the now millions of vaccine injury reports, many of which are life-threatening or damaging to fertility, the Medicines and Healthcare products Regulatory Agency, which runs the Yellow Card system, determined that the “total number and the nature of Yellow Cards reported so far is not unusual for a new vaccine.”

injury reports related to the “vaccines” continue to pour in around the world, the U.S. Food and Drug Administration (FDA) moved Monday to give its “full approval” to the Pfizer/BioNTech mRNA jab, characterizing the experimental shot as “a key achievement for public health.”

Despite clinical trials for the experimental drug not being due for completion before May 2, 2023 at least, the American agency decided to award the jab a “milestone” biologics license, with FDA acting commissioner Janet Woodcock claiming that individuals “can be very confident that this vaccine meets the high standards for safety, effectiveness, and manufacturing quality the FDA requires of an approved product.”

Rebutting Woodcock’s confidence in the shot, world-renowned medical expert Dr. Peter McCullough, M.D., of the Truth for Health Foundation noted that people “have been asked on faith to sign up and take one of these vaccines with no information, with a minimal informed consent” prompting him to declare that “there is no product in human history that has ever created such a swathe of injuries to the public that’s been asked to participate in taking one of these vaccines.”