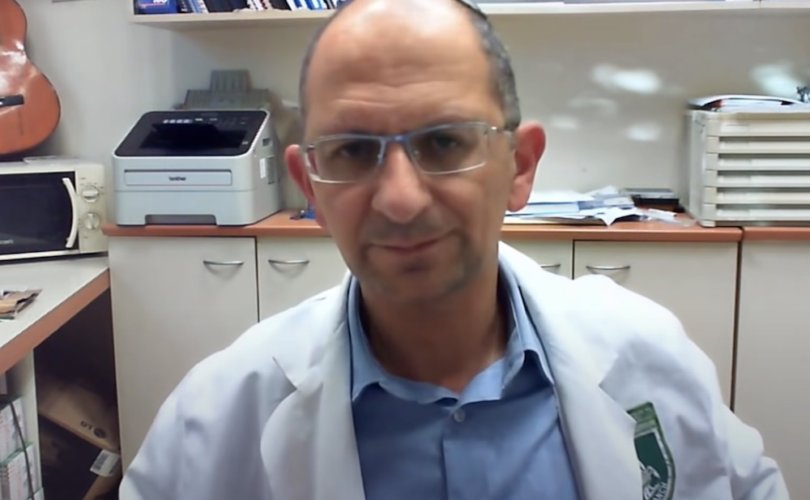 (LifeSiteNews) — Vaccine passports are on their last legs in Israel because the COVID-19 shots are ineffective at stopping transmission, a prominent Israeli immunology expert says in a new interview.

Prof. Cyrille Cohen is head of the Laboratory of Tumor Immunology and Faculty of Life Sciences at Israel’s Bar Ilan University, and serves on the Israeli government’s vaccine advisory committee. On Tuesday, UnHerd published a lengthy interview with Cohen conducted by host Freddie Sayers.

While continuing to believe that the COVID vaccines “can prevent severe disease,” Cohen spoke candidly about how their utility in halting spread of the virus failed to meet expectations.

“The feeling we had in Israel last spring, after we had a deadly month of January with more than 4,000 people that died, we were after our third lockdown,” he recalled. “And suddenly, we were opening and opening and opening, and cases were going down, hospitals were getting empty, people were, I’m not joking, my colleagues, doctors were dancing in the corridors out of joy, ‘It’s over!’’ So we did believe at that time that vaccines can prevent transmission.”

But that initial promise did not last, he said. “We were surprised to discover at the end of the day that no, the vaccines are not protecting us, are not providing what we call sterilizing immunity.” Particularly with the rise of the omicron variant, which is believed to now be the dominant variant of COVID-19, “we don’t see virtually any difference, a very narrow gap between people who are vaccinated and non-vaccinated, both get infected with the virus more or less at the same pace.”

Cohen went on to agree that the Green Pass, Israel’s vaccine passport system, should be phased out of use, noting that as a practical matter it is already “not too much enforced” and saying, “I don’t think there is a point right now to maintaining a Green Pass, especially in the Omicron era.” He added that “it’s not a secret” that the purpose of the pass was “not necessarily to prevent transmission,” but to “encourage people to get vaccinated.”

“We need better vaccines to prevent transmission,” he said. “I’m all for a nasal vaccine, for example, that would be able to better mimic the immunity that we get from the disease … we have to take into account that still the virus is better at immunizing than the vaccine.” Cohen took pains to clarify that he was not advocating that people intentionally infect themselves for the sake of acquiring natural immunity, but simply describing the situation: “Herd immunity is a consequence for me. It’s not an objective, it’s not a goal. There is a thin nuance here, if I may say, that people have to grasp.”

Cohen also suggested that, as COVID is a relatively recent and evolving situation, a modicum of humility was in order regarding people’s personal decisions: “It’s a free world, we are all experimenting to some extent what’s the best strategy to go with.”

Elsewhere in the interview, Cohen said he was “extremely sorry” about closing schools over COVID, that “education was the thing we shouldn’t have touched. Never, never,” and predicted that COVID will eventually become “like flu, I think there is going to be bad waves and better waves, with a better immunity at the level of the population, with better vaccines with better treatment. In that sense, and I’m extremely cautious, there is a possibility that Omicron will accelerate that transition.”

The interview follows another Israeli researcher, Prof. Gili Regev-Yochay of Sheba Medical Center, admitting that the COVID shots are “not good enough” to stop transmission of omicron. Previous reporting indicates that they struggled against previous variants, as well, with The Daily Beast reporting last August that Israel experienced a “massive surge of COVID-19 infections,” attributed to the delta variant, despite being “one of the most vaccinated countries on earth.”

In the United States, the majority of omicron cases so far have been among the vaccinated, and the variant (which is now believed to make up 95% of all new COVID cases in the U.S.) appears to be less dangerous than its predecessors because it targets the upper respiratory tract rather than the lungs.

COVID vaccine hesitancy persists in large part from the rushed nature of the vaccines, which under the Trump administration’s Operation Warp Speed initiative were developed in a tenth of the time vaccine development usually takes and a quarter of the time it took the previous record-holder, the mumps vaccine.

Data indicates that widespread dissemination of the COVID vaccines has failed to end the pandemic in America, as well. The U.S. Centers for Disease Control and Prevention (CDC) considers more than 209 million Americans (62% of the eligible) to be “fully vaccinated” (a moving target given the vaccines’ temporary nature), yet data from Johns Hopkins University reported in October shows that more Americans died of COVID-19 by that point in 2021 (353,000) than in all of 2020 (352,000). The Moderna vaccine was available throughout all of 2021; the Pfizer and Johnson & Johnson shots were made available in late February.