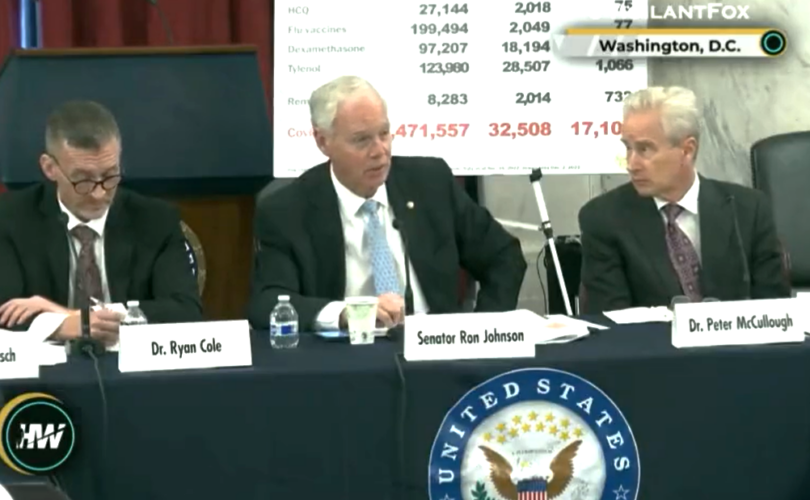 (LifeSiteNews) — A highly acclaimed insurance analyst reported that “the best statistics we have” reveal those who accepted the experimental gene-base COVID vaccine “have a 26% higher mortality rate,” including 49% for those under 50, and 145% for those who accepted just one dose of a two-dose regimen.

Josh Stirling from “Insurance Collaboration to Save Lives” presented at U.S. Sen. Ron Johnson’s roundtable discussion yesterday titled COVID-19 Vaccines: What They Are, How They Work and Possible Causes of Injuries.

The newly re-elected Republican from Wisconsin hosted a broad selection of scientists, researchers, physicians and medical experts to report and discuss information related to the controversial experimental injections and the apparent grave malfeasance of government officials, pharmaceutical companies, and media corporations.

Stirling, whose bio states he “has been recognized as a top analyst by Institutional Investor and the Financial Times,” provided “one chart that tells the whole story” in his four-minute presentation.

He acknowledged “that last data point is, on its face, confusing” that this group of people, who likely had an injury on the first dose, and decided to discontinue, were disproportionately harmed.

Regardless, he affirmed these are “the best statistics we have … at least through today, [and] maybe it will get better,” but at this point, “we’ve got to assume this is now the baseline. There’s going to be 145% higher mortality.”

“And if you were to take these numbers and apply them to the United States, that ends up being something like 600,000 excess deaths per year in the United States from this higher vaccine induced mortality. And, you know, that’s obviously a really concerning thing,” Stirling concluded.

He also summarized that his group of “actuaries and data-driven people” had generated significant data not only on rising morbidity but on blood clotting, “female fertility” problems and “lots of nervous system [issues], cardiac and multisystem problems.”

Excess mortality rates are soaring around the world: To what extent is the COVID jab responsible?