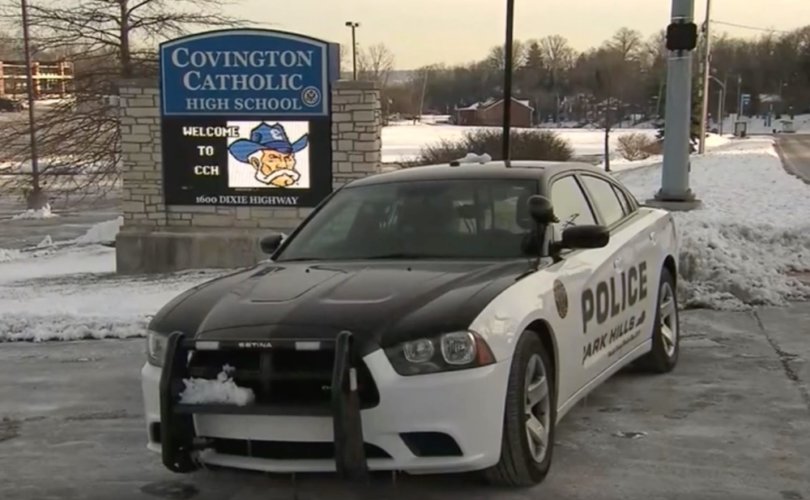 PARK HILL, Kentucky, January 23, 2019 (LifeSiteNews) – Covington Catholic High School is under heavy police protection after being reopened for the first time since a video went viral over the weekend in which some of its students had an encounter with a Native American counter-protester in Washington, D.C. on Friday. As students went to class on Wednesday morning, additional security was evident.

Covington Catholic High School was closed Tuesday after fielding multiple death threats via various means. A message from school principal Robert Rowe said, “After meeting with local authorities, we have made the decision to cancel school and be closed on Tuesday, January 22, in order to ensure the safety of our students, faculty and staff.” Evening activities, including basketball, were cancelled on Tuesday evening.

For several days, police cars have been blocking entry onto the Covington Catholic campus. The nearby Notre Dame Academy has been taking extra security precautions as well. Police advised Covington Catholic students to avoid wearing any clothing or gear featuring the school’s logos and colors.

The Diocese of Covington and the school announced on Tuesday that an independent investigation into the incident involving the students is underway. “Concerning the incident in Washington, D.C., between Covington Catholic students, Elder Nathan Phillips and Black Hebrew Israelites the independent, third-party investigation is planned to begin this week. This is a very serious matter that has already permanently altered the lives of many people. It is important for us to gather the facts that will allow us to determine what corrective actions, if any, are appropriate,” the statement said.

An initial video that was shared online lent itself to a narrative that Covington Catholic students had jeered and harassed a group of Native American counter-protesters. The edited video showed Covington Catholic student Nick Sandmann standing silently in front of Nathan Phillips, who was loudly beating a drum and chanting just inches away from the boy’s face. The video generated widespread condemnation of the students, even from pro-life and conservative leaders.

But further video emerged showing that Phillips had confronted the Covington students while other members of his group taunted them with statements like “white people, go back to Europe” at the kids. Media organizations have since been backtracking, and many conservative leaders have issued public apologies to the students.

On Tuesday, a small group of protesters organized by the American Indian Movement Chapter of Indiana and Kentucky showed up outside the headquarters of the Diocese of Covington. It was billed as rally for peace and against racism. Protesters bore signs reading: “God doesn’t teach hate. Why do you?” Some demanded a meeting with diocesan officials, as well as a change in the curriculum at Covington Catholic. Supporters of Covington Catholic were also on hand. No other disturbance was reported. The rally was originally planned at the school, but was moved after threats to the school were aired.