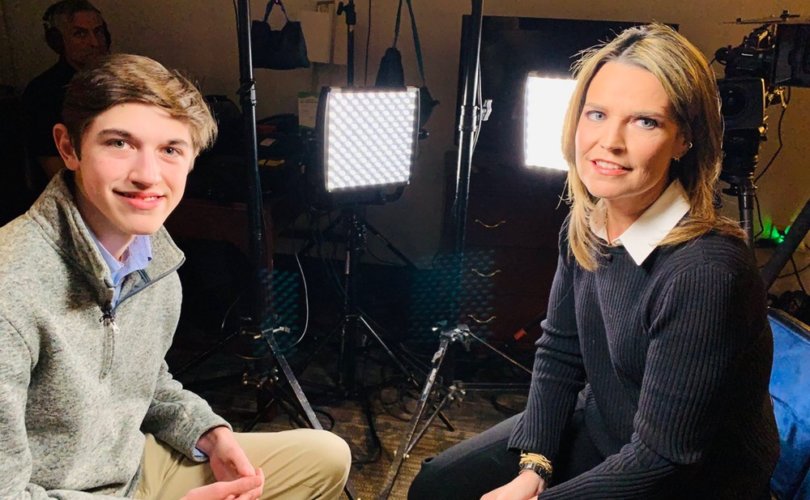 January 22, 2019 (LifeSiteNews) – Nicholas Sandmann, the pro-life high school student who found himself at the center of a firestorm over a viral March for Life video, will be seen in his first major press interview tomorrow, speaking to Savannah Guthrie of NBC’s “Today Show.”

Guthrie announced the taped interview Tuesday via Twitter with a picture of herself and Sandmann, revealing that it would air Wednesday morning.

Sitting down with Nicholas Sandmann – the student at the center of the protest controversy at the Lincoln Memorial. Airs tomorrow on @TODAYshow pic.twitter.com/oSb8ljunQN

Sandmann was part of a group of students from Covington Catholic High School in Kentucky who were accused of harassing an elderly Native American veteran while waiting for their bus to take them home from the just-concluded March for Life.

The original video showed the man, Nathan Phillips, beating a drum and singing while students in Trump’s iconic red “Make America Great Again” hats laughed and hollered around him, with Sandmann apparently grinning inches from the man’s face. But additional video and firsthand accounts soon revealed Phillips was the one who waded into the group waiting for its bus and decided to beat a drump inches from Sandmann, and other adults who accompanied Phillips shouted taunts like “white people, go back to Europe” at the kids.

Nevertheless, dozens of major media outlets ran with Phillips’ initial claims about the event, with Covington Catholic, the Diocese of Covington, and even March for Life President Jeanne Mancini and an editor of the conservative National Review joining them. Many, including the March for Life, have since retracted their initial reactions, but the Diocese of Covington and the high school have yet to apologize.

President Donald Trump spoke out on the case as well, issuing a pair of tweets lamenting that the kids “were treated unfairly with early judgments proving out to be false” and expressing hope that the incident could ultimately help “bring people together.” Conservative commentator Laura Ingraham reported Tuesday that Trump has also invited the students to the White House, though when that will take place is unclear.

Despite the retractions, the original characterization of the story continues to feed a liberal fervor that has included death threats and attempts to publicize their identities, and Guthrie has already received a torrent of hostile responses for giving Sandmann’s side of the story a platform – many from the verified accounts of public personalities:

Sounds awesome! Will you be digging up Hitler’s corpse for a fun dialogue on Thursday as well Savannah?

Ooh, this could work for your “show.”

“Adam Lanza: At the Center of One of Connecticut’s Most Controversial Events, We Do Poetry Readings from His Private Journal” pic.twitter.com/IuDnv5gTFe

If we can organize boycotting Trump’s Oval Office address, we can certainly orchestrate a boycott of @TODAYshow and @SavannahGuthrie for at least week! Who’s in?

If he were alive, they would’ve interviewed James Earl Ray yesterday to ask how killing MLK Jr. impacted his life.

You know how I felt after watching the whole video? Like those kids are still genuine, dickstain monsters and that the world would be a better place if their parents were never born.

Nathan Phillips, an activist who was on the National Mall for the Indigenous Peoples' March the same day, said Tuesday it was “not the right time” to meet with the students, but later in the day reversed himself and said he would be willing to discuss race relations at the high school. He is standing by his original accusations against the students, however.

“Racial hostility occurred on the steps of the Lincoln Memorial,” Phillips continued to claim, accusing Sandmann of including “intentional falsehoods” in his account of the incident. Critics have noted that Phillips’ own accounts have been inconsistent across multiple interviews.