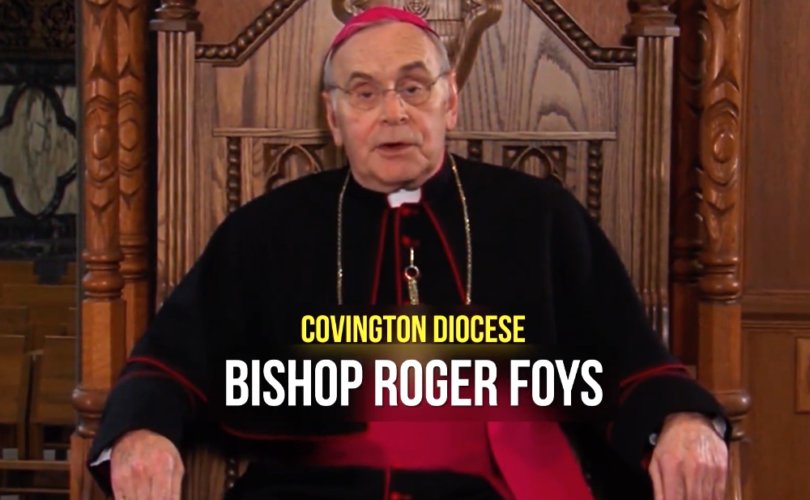 COVINGTON, Kentucky, January 25, 2019 (LifeSiteNews) – A conservative group has launched an ad for radio and social media summarizing the Covington March for Life controversy, specifically marshaling pressure on Bishop Roger Joseph Foys of the Diocese of Covington to apologize for helping “slander and vilify” the pro-life Catholic students.

The Diocese was among those that condemned a group of Covington Catholic High School students after reports claimed a video showed them harassing an elderly Native American veteran at the March for Life last weekend. But additional video and firsthand accounts soon revealed the man, Nathan Phillips, was the one who waded into the group waiting for its bus and decided to beat a drum inches from student Nick Sandmann’s face, and other adults who accompanied Phillips shouted racial taunts at the kids. The kids had been performing school cheers in an attempt to drown out the harassment.

On January 19, the Covington Diocese and the high school issued a joint statement that the students’ behavior was “opposed to the Church’s teachings on the dignity and respect of the human person.” After the original narrative fell apart, Foys issued a new statement stating that an “independent, third-party investigation is planned to begin this week” and that it was “important for us to gather the facts that will allow us to determine what corrective actions, if any, are appropriate.”

Many have criticized the community’s Catholic authorities for condemning the boys in the first place and for not simply retracting and apologizing for the original statement. On Wednesday a Covington parent speaking to LifeSiteNews anonymously revealed that Foys visited the school and met with the boys, and claimed he couldn’t change his previous statements until the investigation is finished.

On Thursday, Conservative Response Team released a one-minute ad on social media and the Cincinnati radio market (which includes Covington) arguing that Foys “joined the lynch mob and gave them more rope.”

“Then the facts came out. Nathan Phillips was not only the aggressor, but a professional leftist agitator who lied about serving in Vietnam and everything that happened,” the ad says. “Truth: the Covington Boys are honorable young men who followed Dr. King’s non-violence principles to resist a bully.

“But Bishop Foys not only won’t apologize for stringing up these young men, he still wants to put them on trial,” it says before calling on listeners to call the Diocese at 859-392-1500 and telling Foys “to apologize to the Covington Boys, and apologize to his parishioners.”

The tension may come to a head sooner rather than later, as the students’ attorney Robert Barnes announced Wednesday on Fox News that he was putting anyone who had publicly libeled the students on 48-hour notice that if they didn’t retract those statements by Friday, they may find themselves “a defendant in a lawsuit because those lawsuits will start to occur next week.”

“If you've said anything false about these kids, they are willing to extend you a 48-hour time period — a period of grace consistent with their Christian faith — for you to, through confession, get redemption and retract and correct and apologize,” said Barnes, who is representing the students for free.

LifeSiteNews will continue to update this story throughout the day. Click here to read all LifeSiteNews coverage of the Covington Catholic case.