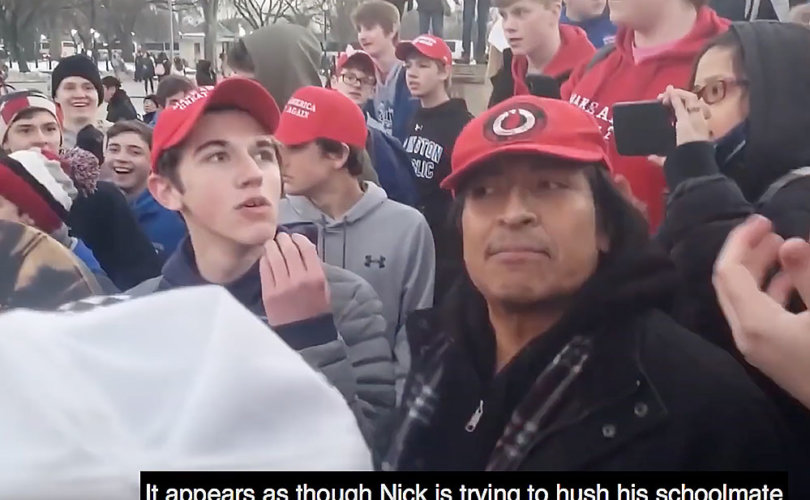 Nick Sandmann is shown gesturing to hush up a student just behind the native American camera man to the right of Sandmann who had been swearing and making racist comments to the student.Lin wood video

February 8, 2019 (LifeSiteNews) –  One of the attorneys representing Covington High School student Nick Sandmann and his parents confirmed to LifeSiteNews that Native American activist Nathan Phillips, and some of the others who have received notices from the attorneys, “will be sued.”

Lin Wood, an Atlanta-based lawyer, told LifeSite yesterday that Phillips’ “lies and false accusations” against Sandmann and the other Covington students are “well documented.”

On January 18, in the span of a few hours, Nick Sandmann’s peaceful attendance with his Covington Catholic classmates at the March for Life in Washington, D.C. was turned into a personal nightmare when Nick became the focus of false and defamatory accusations published and broadcast across the nation and the world. A mob comprised of activists, church and school officials, members of the mainstream print and broadcast media, and individuals on social media, including elected public officials and celebrities, rushed to condemn and vilify this young man by burying him in an avalanche of false accusations, false portrayals, and cyberbullying that have threatened his reputation and his physical safety.

Nick Sandmann is 16 years old. He is an eleventh-grade high school student. He is not the face of evil and he did absolutely nothing wrong or inappropriate in connection with the incident to deserve the heinous accusations made against him by uninformed or agenda-driven individuals and media entities.

The legal action by  Sandmann’s attorneys is ramping up after notices demanding preservation of evidence for possible defamation litigation were recently sent out to more than 50 media, dioceses, and celebrities.

Wood told LifeSite that the list of recipients of the notices “continues to grow in number” and that the legal team is “in the process of sending formal written retraction demands in conformity with statutes in states in which litigation may be filed.” They expect to advance to the next stage and “file the first round of civil lawsuits within the next two weeks.”

Asked about why the Diocese of Covington is still investigating the Washington incident involving the students, Sandmann’s attorney responded:

We have no idea why the investigation by the Diocese has not been concluded but we are confident that any objective review of the evidence will conclude that Nick did nothing wrong. Nick remained calm and well-mannered despite being confronted by an activist beating a drum within inches of his face while chanting loudly.  Nick did not utter one word except to quietly urge a classmate to refrain from making any comments that might aggravate the situation created by Phillips and the Black Hebrew Israelites.

Additionally, Wood confirmed rumors that Sandmann had been prevented from returning to the school for several days after the students returned from Washington. Wood stated to LifeSite, “Nick was prohibited by the school from attending classes for 6 school days in the two weeks following the incident “and

his return was only allowed on February 1 after his lawyers made clear to the school that we would not tolerate Nick being isolated and singled out based on specious claims that he first needed to give a statement to the school without his counsel in attendance and that there were ongoing security concerns (all other students had already been allowed to return to classes). On Saturday, January 19, Nick provided the school principal with an unsolicited email describing the incident. Nick had also previously released a 3-page, detailed statement concerning the incident.

Wood has also created a video, Nick Sandmann: The Truth in 15 minutes, to reveal what really happened during the incident in which the students were victimized by two groups of activists while the students were waiting for their bus.

There are significant items in the video that have not been reported by mainstream media that heavily covered the incident with the Covington students and American activist Nathan Phillips.

Most seemed to rely almost entirely on statements made by Phillips and especially on a short initial video posted on social media that went viral. The video appears to have been deliberately edited to portray the Covington students as accosting and disrespecting Phillips.

The video was initially pushed through what has been revealed by Breitbart to be a likely Democrat activist controlled, anti-Trump fake Twitter account. It has since been suspended by Twitter for violating its fake account policy. Experts say the use of the account to so effectively promote the video had “the hallmarks of a disinformation campaign.”

That social media impact resulted in Sandmann and his family, the Covington High School and even one of the lawyers for the Covington students receiving numerous threats, including death threats.

The video produced by Lin Wood reveals that there was an ongoing confrontation in the Lincoln Monument area, where the students were to assemble after the March for Life, between an Indigenous People’s March group and five black men who identified as Hebrew Israelites.

The Israelites, a known hate group, were preaching vulgar racial slurs at the Indigenous marchers. Other video records have indicated that this confrontation may have been going on for over an hour and had become increasingly heated before most of the students arrived.

When the first several Covington students arrived, they are shown watching the confrontation between the Black Israelites and the Native Americans. When the Israelites started to turn their insults to the students, the students are shown immediately turning around and walking away.

Later, many more Covington students arrived and the Israelites ramped up their hateful taunts toward the students.

A student, with several girls near him, is shown stating, “It’s not rape if you enjoy it”and immediately another student says, “He’s not from Covington.”  That initial statement has been one of the incidents used to condemn the Covington students. However, it does appear in the video that the student who made the vulgar comment is not from Covington. Lin Wood explained to LifeSite:

Covington Catholic is an all-male high school. A Covington student we asked did not recognize the girls. He did not think they were from Northern Kentucky.

After about an hour of enduring the verbal attack from the Hebrew Israelites, the boys asked their chaperones if they could do one of their pep rally chants to drown out the hate group.

The chant attracted a group of native Americans led by veteran activist, Nathan Phillips. Though Phillips later claimed he was trying to get to the Lincoln Monument, he is shown clearly bypassing a wide-open pathway to the monument and instead moving straight to where the Covington boys were standing. The boys began to celebrate by dancing and chanting to the beat of Phillips’ drum.

The narrator in Wood's video asks at this point, “Is it possible that the boys saw the Native Americans as allies stepping in to drown out the Israelites” who had been constantly shouting hate messages at both the native Americans and the students?

The video continues to present the happy, smiling, young Covington students with voice-overs of later comments by Phillips to television media that are totally contradicted by the video evidence Wood compiled.

Phillips is shown moving right up to Nick Sandmann and heard later having claimed to media that he tried to go around Sandmann. The video evidence is that he made no such attempt.

The native American who was filming Phillips is shown telling one of the students wearing a Make America Great Again hat, “So if you want to make America a great cause for you white people, go back to Europe where you came from. This is not your land.” The student tries to respectfully make a counter point and the native American is seen telling the young student, “Get the F*** out of my face with that sh**t.”

The video shows Phillips being questioningly told by a reporter, “What broke this up is someone calling to the students and saying their bus was there, that's what pulled them away?” Phillips incredibly responds, “In my mind well yes, they could say they are running to the bus, but if you look at it from another angle, they're running from the police.”

There was no police presence whatever seen in any of the videos and the recordings clearly show the students being told their bus was now available and then immediately running to the bus, seemingly happy to get away from the intimidation they had been experiencing.

The video then shows Phillips responding to a news reporter question about his military service saying that he has “never stepped foot in South Vietnam” and at another time he is shown saying, “I’m a Vietnam vet.”

Another news person says to Phillips, “You could hear the Hebrew Israelites shouting things..” and Phillips immediately responds, “and the white people were shouting racist things back at the Black Hebrews.” The journalist then says that “no video evidence has been found supporting his claim.”

Nick Sandmann’s Lawyer Goes NUCLEAR, And The Media Is In Big Trouble