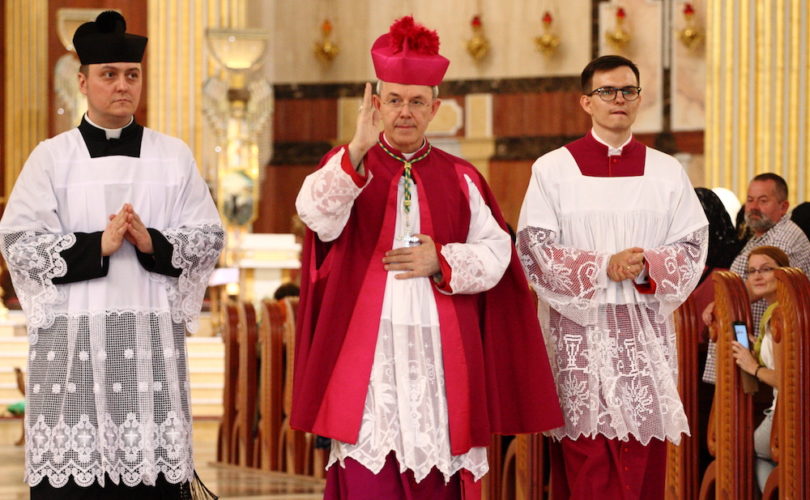 February 1, 2016 (LifeSiteNews.com) — “The very crisis of the Church in our days consists in the ever growing phenomenon that those who don’t fully believe and profess the integrity of the Catholic faith frequently occupy strategic positions in the life of the Church, such as professors of theology, educators in seminaries, religious superiors, parish priests and even bishops and cardinals.”

So said Kazakhstani Bishop Athanasius Schneider in a recent interview with the Catholic website Rorate Caeli. The 54-year-old auxiliary bishop of the diocese of Maria Santissima in Astana has been a world-wide champion of orthodoxy especially since the two Synods of Bishops on the Family.

“The height of confusion and absurdity,” added Bishop Schneider, “manifests itself when such semi-heretical clerics accuse those who defend the purity and integrity of the Catholic faith as being against the Pope – as being according to their opinion in some way schismatics.”

Bishop Schneider deplored the confusion this causes for “simple Catholics in the pews” for whom he recommends keeping the faith by holding to “the immutable Catholic truths, which were handed over by our fore-fathers, and which we find in in the Traditional catechisms and in the works of the Fathers and of the Doctors of the Church.”

The Kazakhstani prelate said excuses of “development of doctrine” and “pastoral compassion” used by some bishops and cardinals who wish to change the Church's doctrinal language and long-standing discipline, “are in fact usually a pretext to change the teaching of Christ.” Ultimately, he said, “those clerics want another Church, and even another religion: A naturalistic religion, which is adapted to the spirit of the time.”

“Such clerics are really wolves in sheep’s clothing, often flirting with the world,” he said. “Not courageous shepherds – but rather cowardly rabbits.”

He described the Church, “our mother,” as “being bound in cords not only by the enemies of Christ but also by some of their collaborators in the rank of the clergy, even sometimes of the high clergy.” Thus he advised, “All good children of Mother Church as courageous soldiers we have to try to free this mother – with the spiritual weapons of defending and proclaiming the truth, promoting the traditional liturgy, Eucharistic adoration, the crusade of the Holy Rosary, the battle against the sin in one’s private life and striving for holiness.”